From the Replicator to the Replikat, “Todo El Mundo Es Pais”

Over the past two years, I often exchanged opinions with Guido Palazzo, from INTI (the Argentinian Instituto Nacional de Tecnología Industrial). He is a material scientist and one of the strongest supporters of 3D printing that I know. I finally made up my mind to go to Buenos Aires and, with his support, visit some of the 3D printing companies in the area. The first one on my tour is Replikat, a manufacturer of several FFF models that has been active on the local market since 2012, with some 400 machines sold to date. 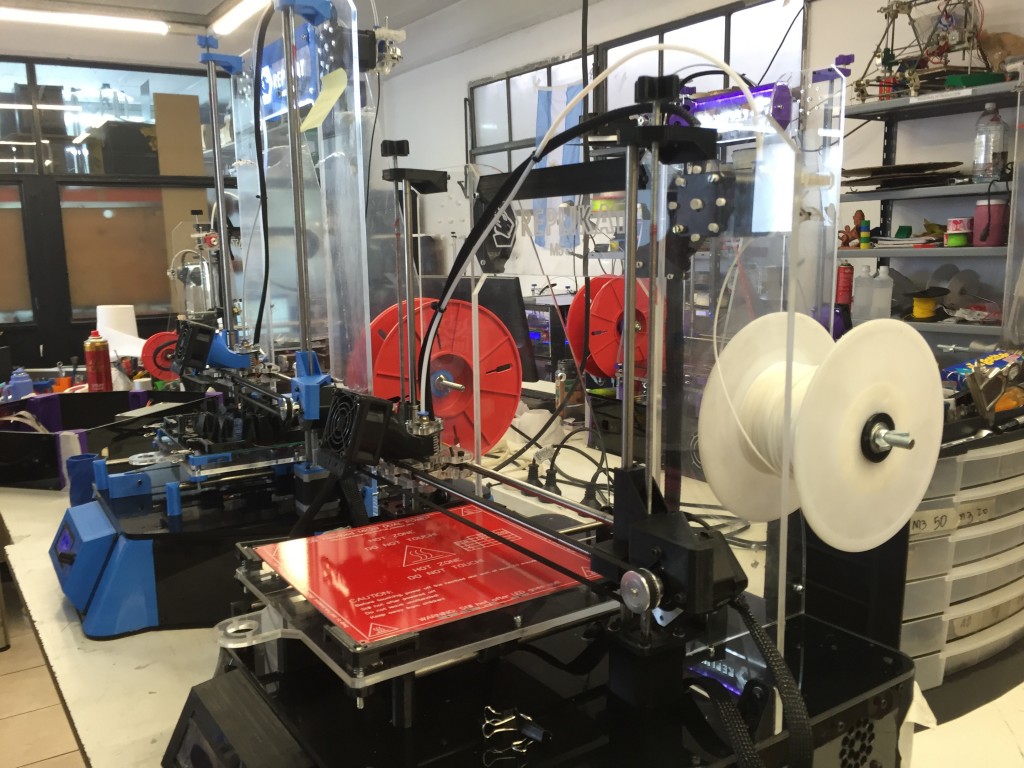 Other reasons that pushed me to go to Buenos Aires were the fact that I had never been to South America and also that I have recently had the opportunity to speak with Mariano Pedernera, founder of I3D Revista (the first Spanish language digital magazine on 3D printing) and organizer of the main Argentinian 3D printing show.

Before getting into my experience with Replikat, I should point out that, even after a 14-hour flight across an ocean and and two hemispheres, it took me about half a day to fall in love with Buenos Aires in the austral summertime. With influences from both the New World (Americas) and the Old (Spain and Italy), I feel that we have a lot of things in common. Which brings us to the title of this article, an old Italian saying which I adapted into Spanish and pretty much translates to “All the World is a town”. It means that even people in places that are very far apart share common habits. 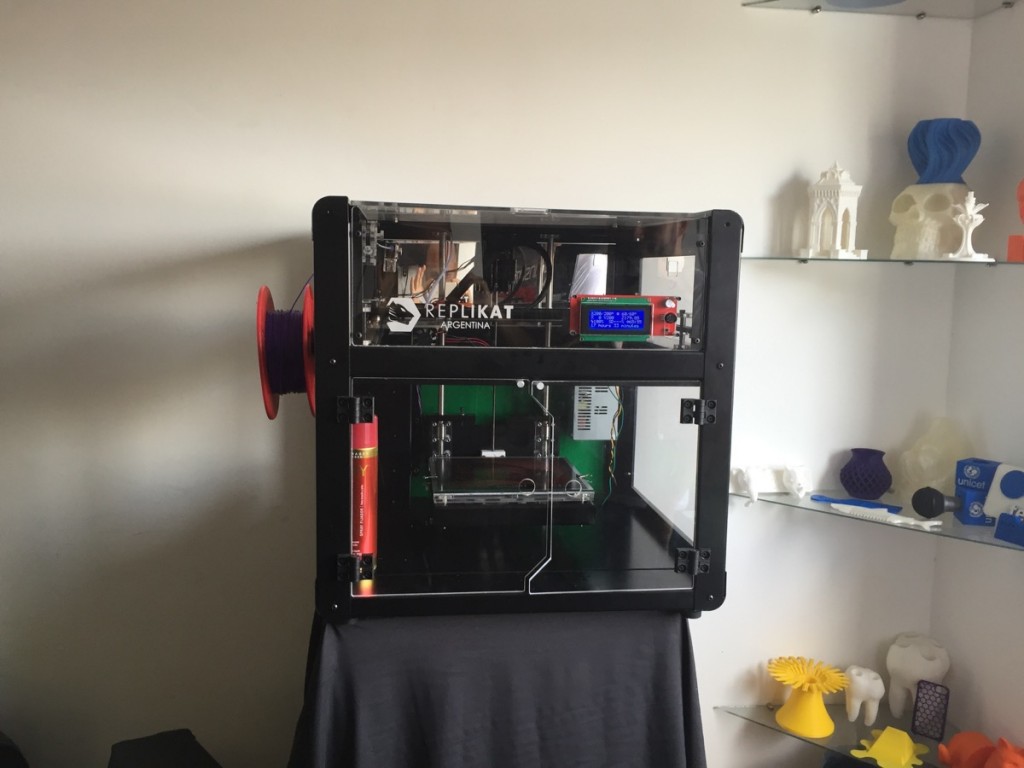 One aspect that one must consider when discussing any type of manufacturing business in Argentina is the limit on imports that the previous Kirchner government applied over the past decade or so. Whether this is beneficial, and to whom, is a debate for the ages (all I can say is that many in Europe would wish for a slightly stricter limit on foreign imports, but, of course, that would mean having less choices). One consideration, though, is that 3D printing, in a way, will make this a moot issue, since you can theoretically source and 3D print 3D printer parts locally, and the only element that needs to cross borders is the knowledge of how to put them together.

In a way, that is what happened with Santiago Omar Scaine and Pablo S. Gonzalez when they decided to take their experience in the Robotics Department of the Universidad de Palermo (a very nice part of Buenos Aires) and use it to build their first Mendel RepRap. As Santiago explained over an Argentinian steak from the fancy restaurant in the new facility they just moved into (more on that further down), they “did not get any financing in the startup phase. In the beginning,” he said, “we had to carefully weight every penny and, with the money we made from selling one 3D printer, we would buy the parts to make two more, one step at a time.” 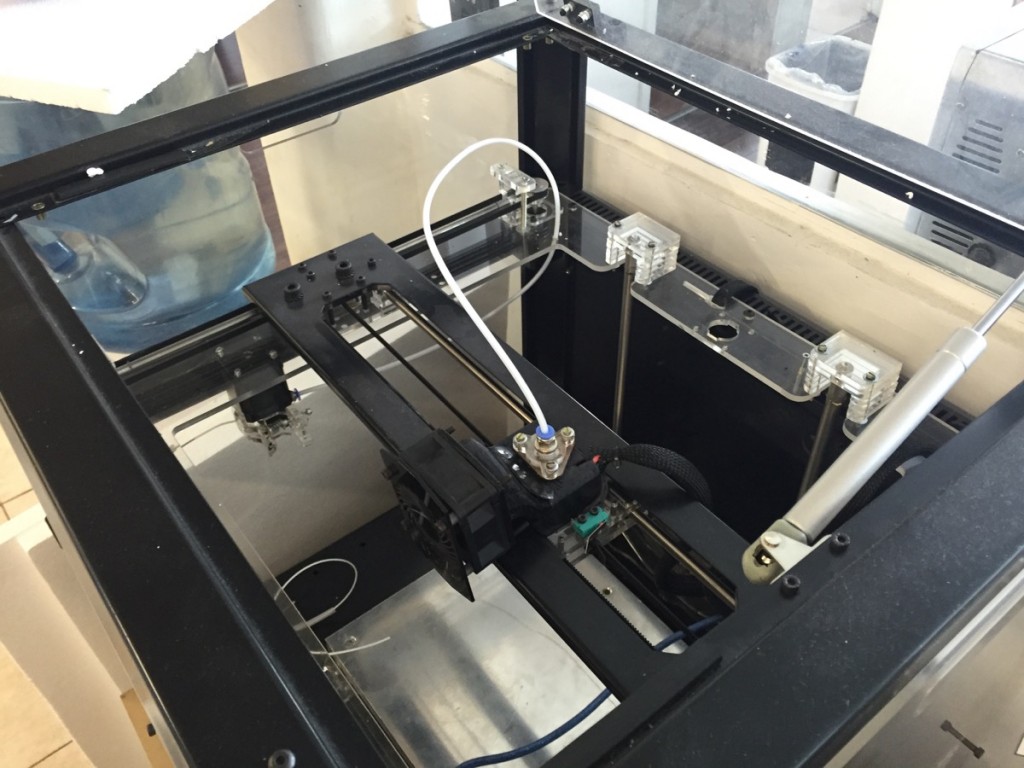 Through its new website and other local and international distribution partners, Replikat now offers three 3D printer models: the Replikat M4 and M5 and the Replikat XY, plus a Replikat Scanner. The printers have heated plates and a 23 x 23 x 20 cm build volume, with the M5 starting at 22,900 pesos which translates to about 1,600 US dollars. They mostly print with PLA; however, one particularly impressive print I saw was a large rocket made in perfect 3D printed nylon. Santiago assured me that it gave them less warping issues than ABS. A new M6 and another enclosed Core XY model are on the way, along with a huge, 2-meter-tall experimental machine. 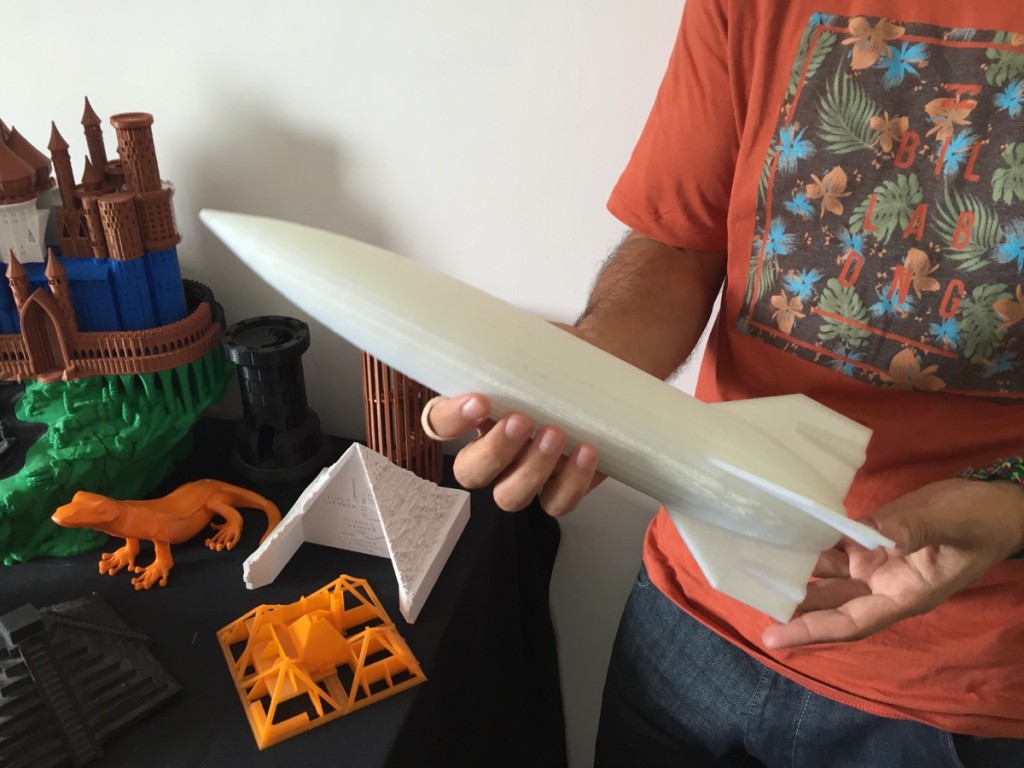 Assembly, R&D, and administrative operations are currently located in the original office at Parque Industrial Champions in Villa Martelli, an area on the outskirts of Buenos Aires. Guido picked me up and we reached the place by car.

The inside of the factory is similar to many other similar manufacturers, with most of the assembly taking place on a large center table and the R&D in a separate, smaller room. Many of the printer parts are 3D printed, but Replkat is now moving on to internally laser cut and serially manufactured parts, since the demand justifies it. The waiting period for a machine is as low as a week and the team has been growing consistently.

The limitations on imports are an advantage for the reduced competition from foreign manufacturers, but, at the same time, they represent a difficulty in obtaining parts such as motors and PCB boards at affordable prices. As they scale up production, the solution for Replikat could be to manufacture the PCBs in house and buy only the basic components.

That’s because the team at Replikat does a lot of experimenting and R&D. They developed the commercial rotational scanner and built a photogrammetric booth that they use to offer 3D scanning services to select industrial partners. In fact, while the company’s customer base includes single users, a significant part is composed of large government and educational initiatives, as well as specific partnerships with large manufacturers of goods and entertainment. 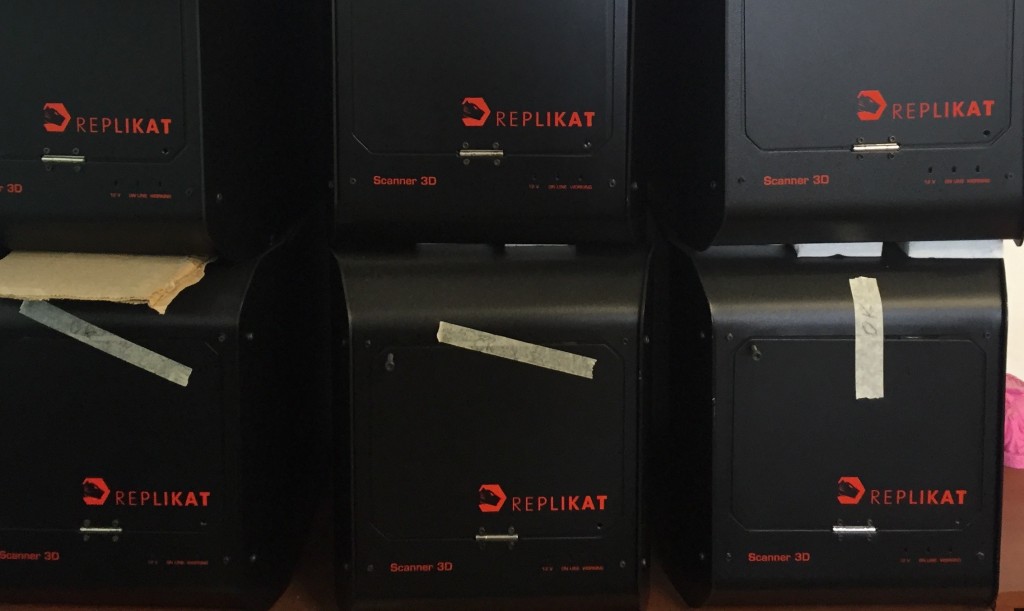 One such partnership, with a large national TV channel, focuses on the collaborative development of their large format 3D printer, which has a build volume of 1 x 1 x 2 meters in height. While this is a fascinating prospect, the company is also using the quiet summer period to finalize the move to the new facility. 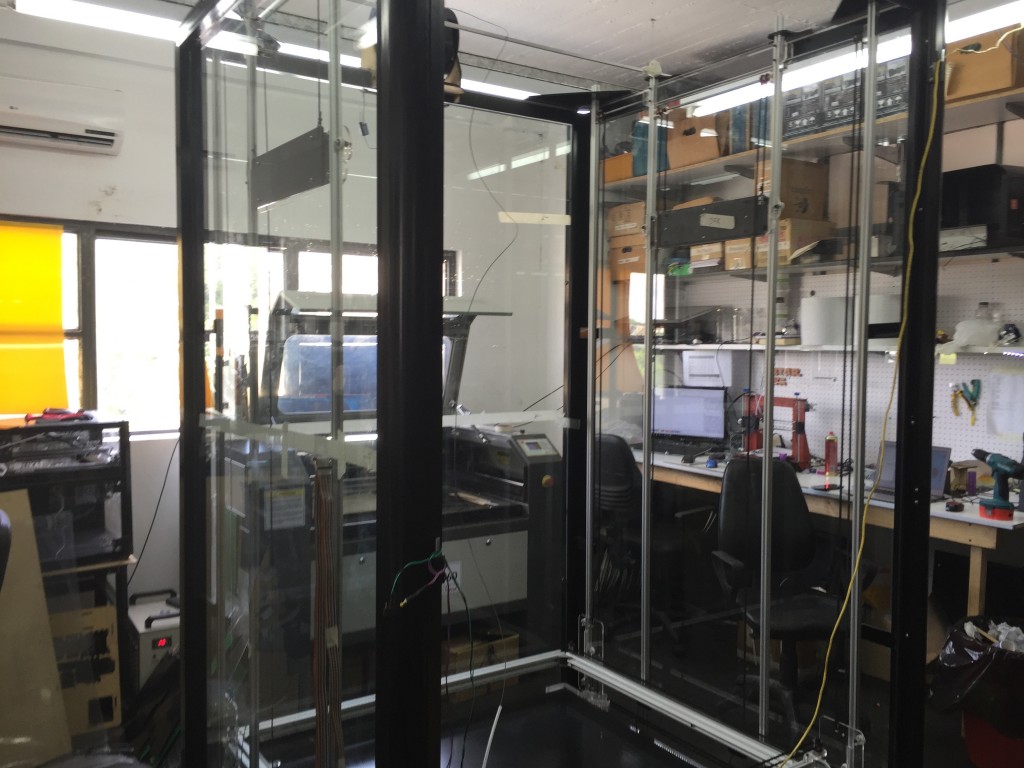 After we finished the tour of the current plant, we moved to the new one, located in the Parque Austral, a scientific, technological, and entrepreneurial facility located in Pilar, about a half-hour drive away. This beautiful structure is not easy for a startup to get into, as the selection process has very strict requisites for company stability. 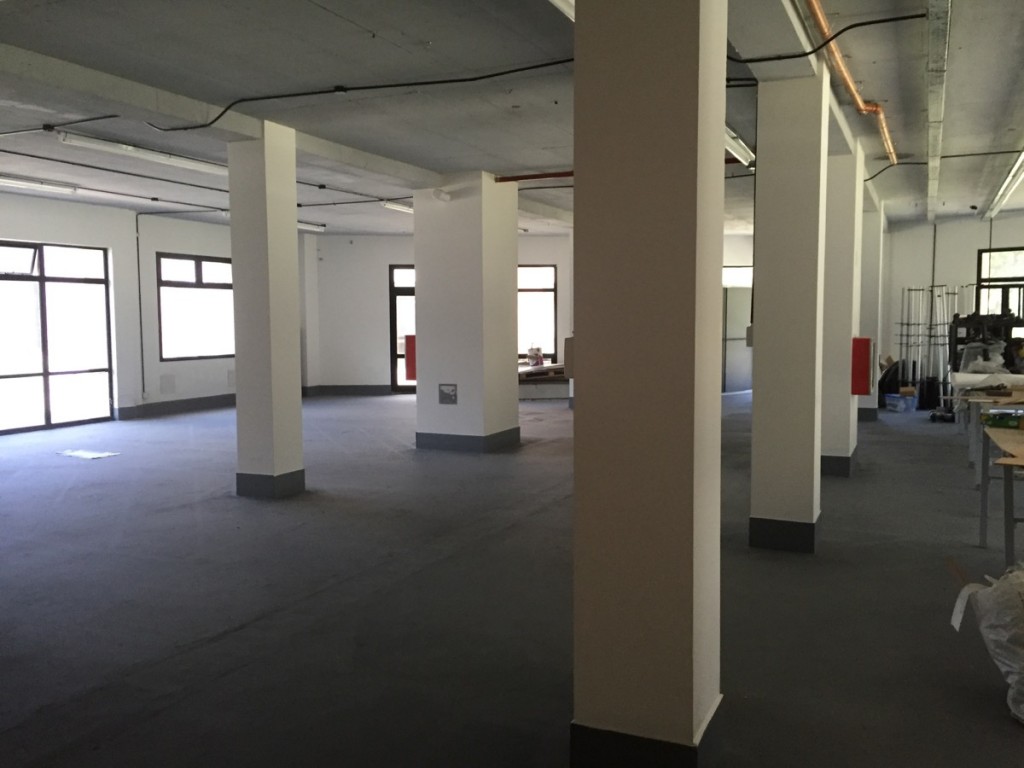 Being part of it is also a huge strategic advantage, since the park hosts several other high profile, innovative companies, including the Hospital Universitario Austral, one of the country’s best (where the previous president, Cristina Kirchner, was operated on for thyroid cancer in 2012). Replikat already has an important agreement in place to collaborate on the medical research front, using its 3D printers. 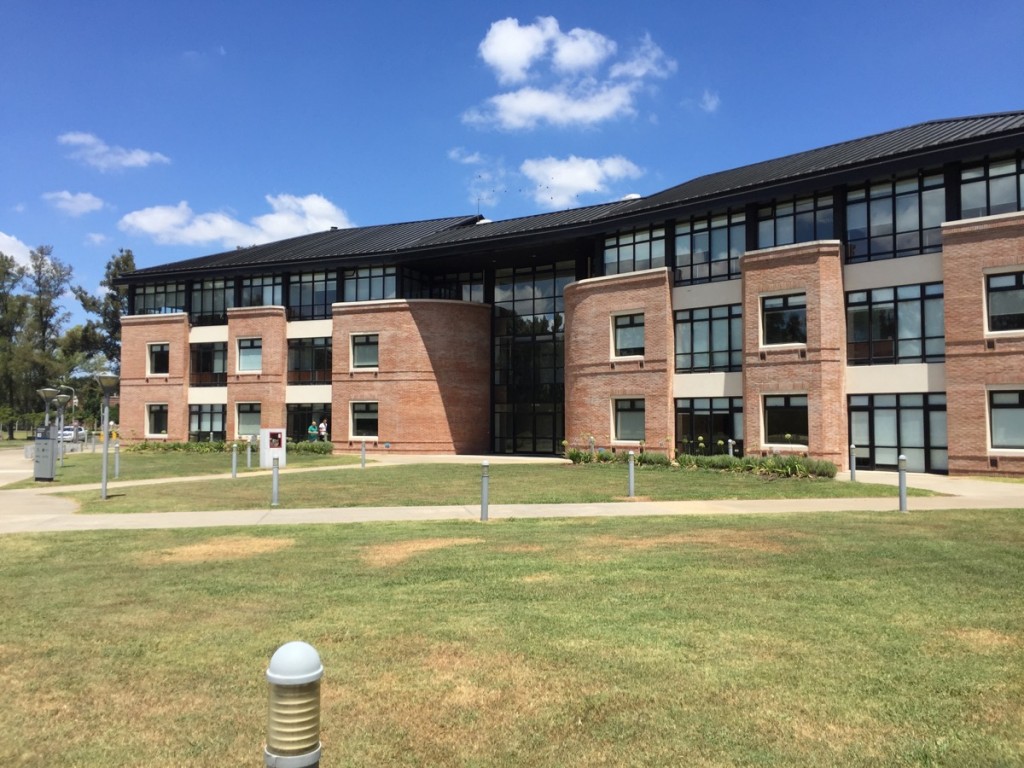 The new plant is housed in a brand new building, surrounded by lawns and trees. Santiago said that it will only take a few days to set up the new assembly line, which has been accurately planned out for optimal efficiency over the past months. Now the real hard part begins: opening up the market in Argentina and, also, in neighboring countries, such as Uruguay, Paraguay, Bolivia, and Salvador.

Although they have received ample coverage from local media because of the many innovative activities they carried out, including providing low-cost prosthetics, medical models, and photogrammetric 3D scans of celebrities and even Christopher Columbus (as in the huge Statue in front of the Casa Rosada), a dedicated business development and marketing/PR team will have to focus specifically on business expansion.

As other companies’ experiences have taught, you can’t just make the market grow, but you need to cater to the actual user needs. For people to buy something they have to understand why they need it and what they can use it for, here and anywhere else. In this, for sure, “todo el mundo es pais.” 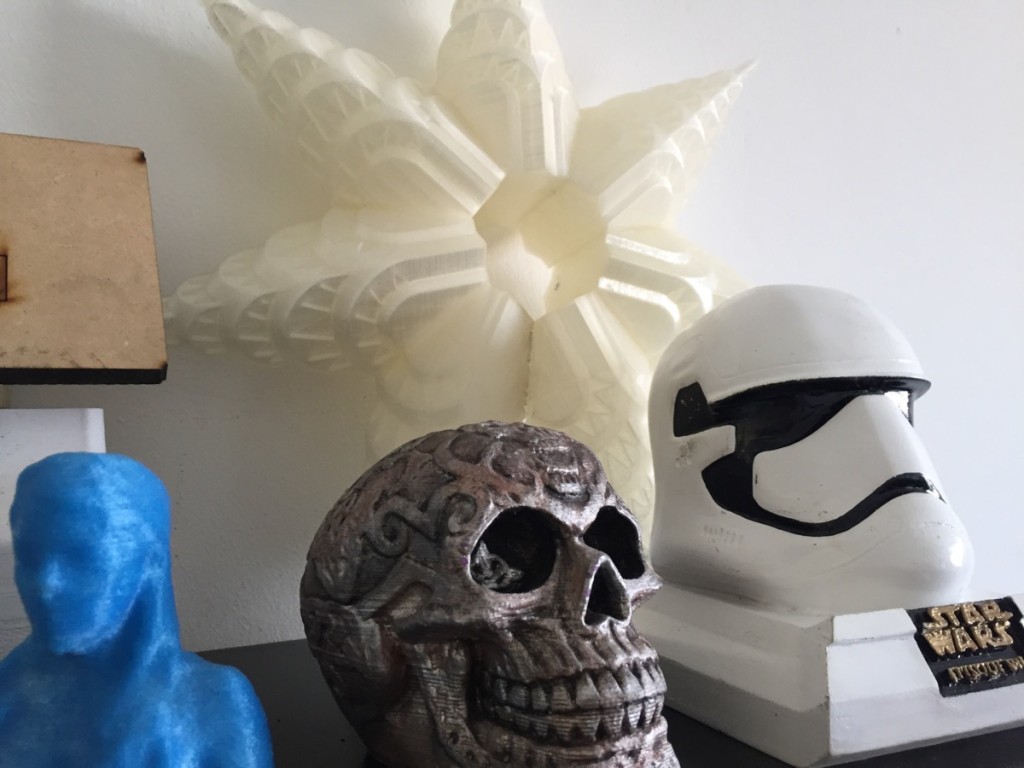