One of the biggest hindrances to replication in the 3D printing world is the lack of affordable 3D scanners, with the least expensive industry-grade scanners costing anywhere from $2,000 to $20,000.  Autodesk is one company that has been trying to tackle that problem by transforming a sequence of photographs into a 3D model with its app, 123D Catch. Now, Florida-based FARO technologies, producer of other laser scanning technologies, has created an application called SCENECT, that uses the depth sensor in an XBOX Kinect or an Asus’ Xtion PRO LIVE to create 3D models for printing.  And, unlike the high priced scanners, their app is completely free. 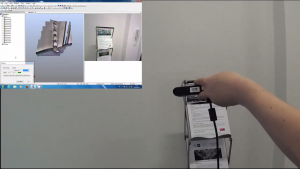 The $150 Kinect, with its built-in depth sensor, has been hacked to serve a variety of purposes: as a remote control for your TV, to create a virtual dressing room, and to make interactive screens for urban planning.  SCENECT uses the Kinect’s ability to pick up depth information to allow users to slowly scan an object to produce a 3D model.  Along with the free app, the company has released a series of tutorials on YouTube that detail exactly how to scan objects and how to perfect the 3D modeling process.

While FARO is not the first to create a Kinect 3D scanning app, their history of scanning technology may give them an advantage at creating reliable scanning software.  And, unlike KSCAN3D, the app can be downloaded for free.  Also, unlike ReconstructMe, SCENECT creates models without watermarks, as far as I can tell.  Unfortunately, as of now, the app is only for Windows.  If you’re a Mac user, you may be able to produce a usable scan with the Makerbot Kinect hack. Now all you need is a Microsoft Kinect.