Making your own filament for your 3D printer with an affordable Filastruder filament extruder is getting closer. Filastruder that hit their Kickstarter target $5000 within one hour and hit nearly $50,000 after two days of launching the campaign, is increasing the funded amount every day. Currently the sourced fund is over $130,000 and 22 days until the deadline.

In the Filastruder Kickstarter campaign most of the backing options have already been filled. Currently there are still available seats for $300 pledge for fully assembled Filastruder shipped in August, full Filastruder Kit shipped in June, and the unlimited lower level options for $10 fame and glory, and $25-$60 options for receiving filament produced with Filastruder.

For those new to Filastruder, it’s a filament extruder for 3D printing, which allows anyone to create their own filament at home. Operating Filatruder is fairly simple. First the user set desired temperature for extrusion and time to warm up. Then fills the hopper with plastic pellets and desired colorant, and turn on the gearmotor. The plastic will begin to extrude from the Filastruder, and the outcome is filament, which can then be spooled up and used with a 3D printer.  The extruded filament can be either 1.75 or 3 mm and colorant can be added for color variations.

Filastruder is a project of Tim Elmore, a Mechanical Engineering PhD student at the University of Florida and his friend Allen Haynes. Elmore, who purchased his first 3D printer fall 2012, was dissapointed how fast filament was consumed, and decided to do something about it while keeping the cost level.

The beta testing has been going well. Elmore’s personal extruder has run over 250 hours without problems extruding ABS. Three revisions for the design has been done after the beta testing, and it is now simpler and has improved reliability. Most of the beta testing was done for ABS, and the tests are now being conducted for PLA. 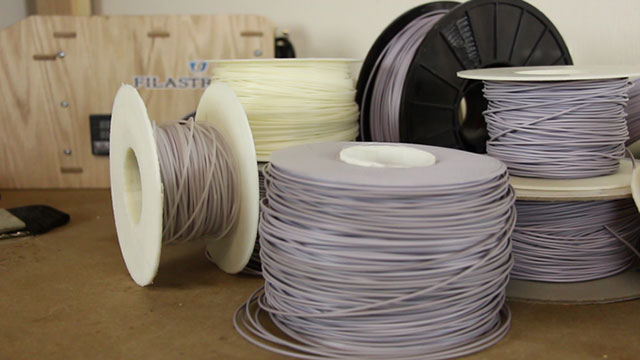