Aspiring writers are a ubiquitous phenomenon. Practically everybody has at least some written skeletons in their closets, whether it be in the form of drawers filled with poems from the delicately unbalanced teenage years, ambitious short stories created in the dark insoniac-filled hours of ever-lasting nights or just mindless scribbles in a patchy diary. A designer, however, is a title baring a status that most place in a more professional context all together, meaning a background – whether it be professional, educational or both – in the discipline. Partly due to this, the sharing of one’s personal artwork and designs with the world outside of the safe surrounding of the bought or leased brick walls might seem even more intimidating than knocking on the door of the local independent book publisher.

Despite this mild social stigma, creativity can naturally be found in all of us despite of what the resume’s might include on a concrete level. Considering this background, FabAllThings’  community-oriented design service concept has a core need — easily explainable to anybody curious about their operating model. FabAllThings, based in Ireland, and founded by a trio of makers and designers, literally grows and flourishes from this paradigm – questioning the unquestionable ’truth’ of why to leave fabulous designs and artwork to rot away in the depths of external hard drives and file-filled clouds, when they could be shared with the world and perhaps even used as an exchangeable artifact for actual figures in the respective creator’s bank account?

Sounds applicable and the very simple steps involved in the actual service process support this initial subjective observation as well: FabAllThings hosts monthly competitions called design calls, where the users of the service are encouraged and challenged to create different types of cultural objects, with categories ranging from clothing to furniture and jewellery. After the parameters are laid down, participants submit their work on the site, an internal peer review is conducted and the top actually producable upvote-heavy pieces of work finally manufactured – physically with the holy trinity of 3D printing, CNC machinery and laser cutters among other devices natively often found in maker spaces and fab labs around the globe.

If the monetazion process is fully completed, the proud owner of the winning designs turned from 1s and 0s to physical objects – offering a feast for other senses besides sight – will also be the new owner of royalties based on sales, which is set at 10%. The contestants wave some of their rights to FabAllThings when entering a contest, but probably the most important factor for most of the aspiring designers, the IP rights remain in the designer’s own hands. As for what these IP rights might affect category-wise, the shopping section of the site currently consists mainly of different flat CNC-cut objects such as coasters and types of jewellery. 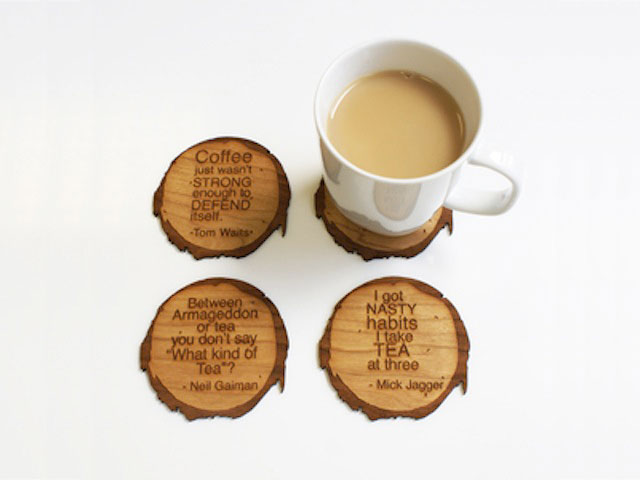 You might be thinking that the aforementioned elements of the service have a familiar ring to them and that notion does have a strong foothold in reality. However, despite the concept sailing away mostly in the only very distantly blue seas of the immature 3D printing service market, something about this project – which based on the lack of labelled site functions and elements such as forums is like the market itself and still in its infancy – leaves a positive after taste in my mouth. The founding trio’s upbeat type of attitude seems like a snug fit considering the playing field they’re eager to occupy.

At least in my book, even though the commission rates seem a bit too low and some other details could also benefit from some further tweaking, the most important questions remain the same as with so many other applicants in the 3D printing service field before this – how to first reach and initiate the users, commit them, find the evangelists and other early adopters/opinion leaders and encourage all of them to actively participate and share the love (and the obligatory ad hominem-filled hate). Only the future will tell what kind of marketing trickery and sourcery FabAllThings have in their pocket and if that tool box’s content will be sufficient in laying a foundation for continuing and sustainable success.