How the European Elections in Italy Relate to 3D Printing

In Italy, like many other member state nations, European elections have traditionally not been considered as important as National and local elections by Italian parties. However, this weekend the union-wide European elections are taking place and they could potentially represent an historical change with the results seriously impacting the Italian political landscape (with the related risk of having the present government asked to resign and a new national election on the horizon).

The last polls on 9th May (in Italy polls are forbidden for two weeks prior to an election) indicated the main three parties as being the PD (Democratic Party), the M5S (Five Stars Movement) and FI (Forza Italia).

What is very interesting is that all three of these main parties have key representatives that are openly supporting 3D printing and additive manufacturing as a key driver to advance local manufacturing intended to bring production back to Europe in general and Italy in particular. 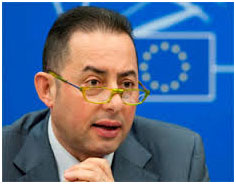 The outgoing Vice President of the European Parliament, Gianni Pittella, is the top candidate of the Party leading the present coalition government. He has been an active advocate of 3D printing during all of his current mandate. Most notable has been his interventions all over Europe to promote 3D printing as the next industrial revolution and some specific interviews on Italian National television, as during a famous program on Italian National and public television (Rai).

He is also due to speak in Brussels next month on 3D printing and advanced manufacturing at the regulatory conference “3D Printing Revolution” taking place on June 10th, 2014. 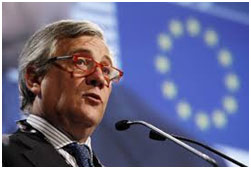 Antonio Tajani, outgoing Vice-President of the European Commission responsible for Industry and Entrepreneurship and of the related Directorate-General, is a leading candidate for the Italian Party lead by Silvio Berlusconi. He has been a strong advocate of advanced manufacturing and specifically also of 3D printing and biotech during his mandate. Focusing on the development and strengthening of SMEs while implementing policies aiming at bringing manufacturing back to Europe, under his mandate Mr. Tajani strongly intervened on supporting Advanced Manufacturing and 3D printing saying that: “The Commission will help reshape EU industry with the formation of new goods, services and business models that would have seemed like science fiction during the first Industrial Revolution. 3D printing technologies, for example, are used to make plastic and metal production parts for the automotive industry, aerospace firms and consumer-product companies. The printers used to exploit this technology utilize ultra-thin layers of powdered materials that are then fused by lasers or electron beams. The process conserves raw materials, saves energy and creates products that are perfectly 21st century.” 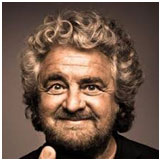 Beppe Grillo is the leader of the M5S, which polls indicate will be the potential winner of the European elections. Famous in the past as a comedian, he often explained during his shows the key roles of new technologies that could help the planet to be a better place. Though he is not a candidate for a European role in the current elections, in an interview just this week on the first Italia Channel (Rai 1), which achieved a record viewing share of 27% and an average audience of more than 4 million, he specifically talked about 3D printing as one of the key industrial developments, fundamental to bring jobs back to Europe while respecting the environment and to protect European Intellectual Property rights. Grillo has been one of the few Italian public speakers to bring to the audience the effectiveness and potentials of 3D printing since 2012.

Not having a crystal ball, I cannot tell you what tomorrow’s results will be across Europe, but one thing you do not need it for is to understand how pertinent 3D printing and AM technologies are becoming on the political landscape here in Italy and further afield.

During his twenty years in China and Asia-Pacific, Giorgio Magistrelli worked as a project manager, Advisor for Investment funds and PE firms, lawyer, banker, lobbyist and management consultant for large and small Corporations, Governments, NGOs and International Donors in emerging markets. Passionate about 3D Printing since when in Shenzhen (China) he assisted in 2011 with a demonstration of additive manufacturing, he started to study, analyze and evaluate new ventures, applications and business opportunities of the new revolution of the XXI Century. He is an active blogger (www.technosource.net/3Dprinting/ and https://twitter.com/Giorgio3DPRINT ) and the Project Manager for the "3D Printing revolution" event on regulatory aspects which will be organized by QED Communications in Brussels (Belgium).