Barcelona is the city that has the first FabLab in Europe, a FabCafè, an active Maker community, and two teams working on food 3D printers. There are 2 Projet 3D printers in the basement of what is possibly the world’s most famous (and spectacular) unfinished church: the Sagrada Familia, a true inspiration for architects and modelers since the late 800’s. All that was missing was a 3D print shop. When it opened up last June, 2014, EntresD became that shop.

While I was in Barcelona for a few days to visit Mobile World Congress (where I met with HP’s new global 3D printing division, based right here in Barcelona), and to explore the local 3D printing community, I passed by EntresD to pay them a surprise visit. I got there just as Maria Torras, who is in charge of the shop’s marketing activities, was opening up. So, I introduced myself and Maria showed me around the shop.

EntresD is primarily focused on selling UP 3D printers, which is quite apparent since, just about everywhere in the shop, there are UP original 3D printers, UP Minis, and even an UP BOX . Andreu Belles, EntresD’s Director Comercial, explained to me that they have an exclusive partnership with the manufacturer of the UP series, Beijing Tiertime, and that the are extremely happy with their relationship and with the performances of the 3D printers. Currently, they are also selling and using Zortrax 3D printers, but only as a temporary solution for its large build size, while awaiting the official UP BOX launch, scheduled for later this year. 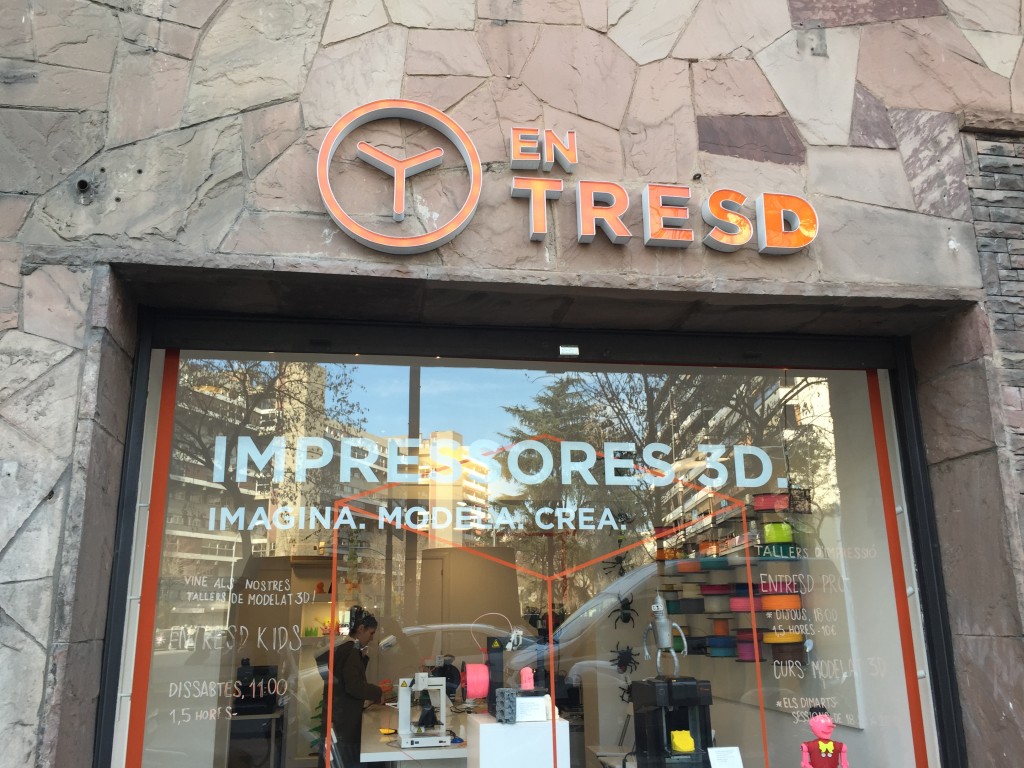 I have seen quite a few 3D print shops open up since I have started writing about 3D printing. Although there are subtle differences (such as the brand of 3D printers carried or the type of services offered), from one side of the world to the other, they are all very similar. EntresD confirms this observation: like many other shops I visited, it is characterized by a very bright, open space, with a modern, minimalistic design and a lot of colorful 3D printed objects all around. 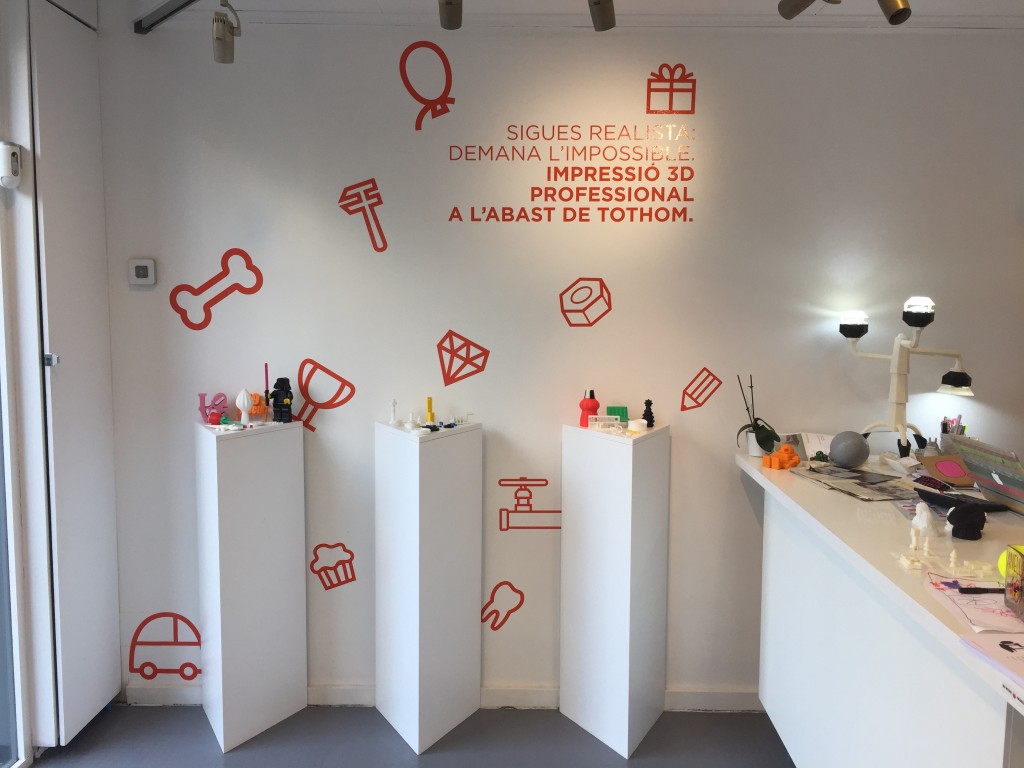 I have to admit, however, that, while I am often impressed by the quality of the prints that professionals are able to get even on basic desktop machines, I was particularly impressed by some of the designs that the EntresD team created with their UP 3D printers. “Most of the merit goes to the machine itself,” Andreu explained. “We don’t really tinker with the settings too much and I have to say that the UP is able to get a definition that even printers with theoretically better technical specs are not.” 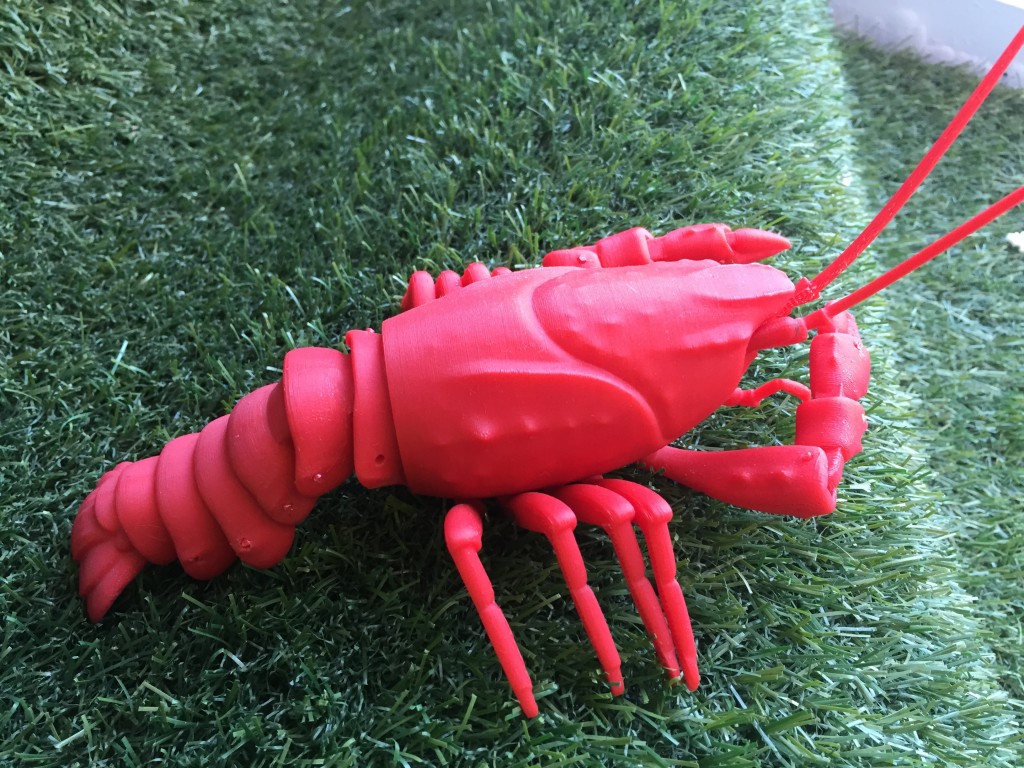 One piece that caught my attention was a modular lobster; however, some of the Spongebob inspired toys were also quite impressive. Maria explained that they have a designer who works with the shop and creates most of the products seen inside, which are mostly for show and not for sale. Just as is the case for most of the 3D print shops I’ve visited, the core business for EntresD is providing courses and teaching children and adults about 3D printing technologies. “Working with children is extremely rewarding,” Maria says. “We ask that they are at least five-years-old because they need to be able to use a mouse to create and modify the designs; however, at that age they pick 3D printing up right away.” 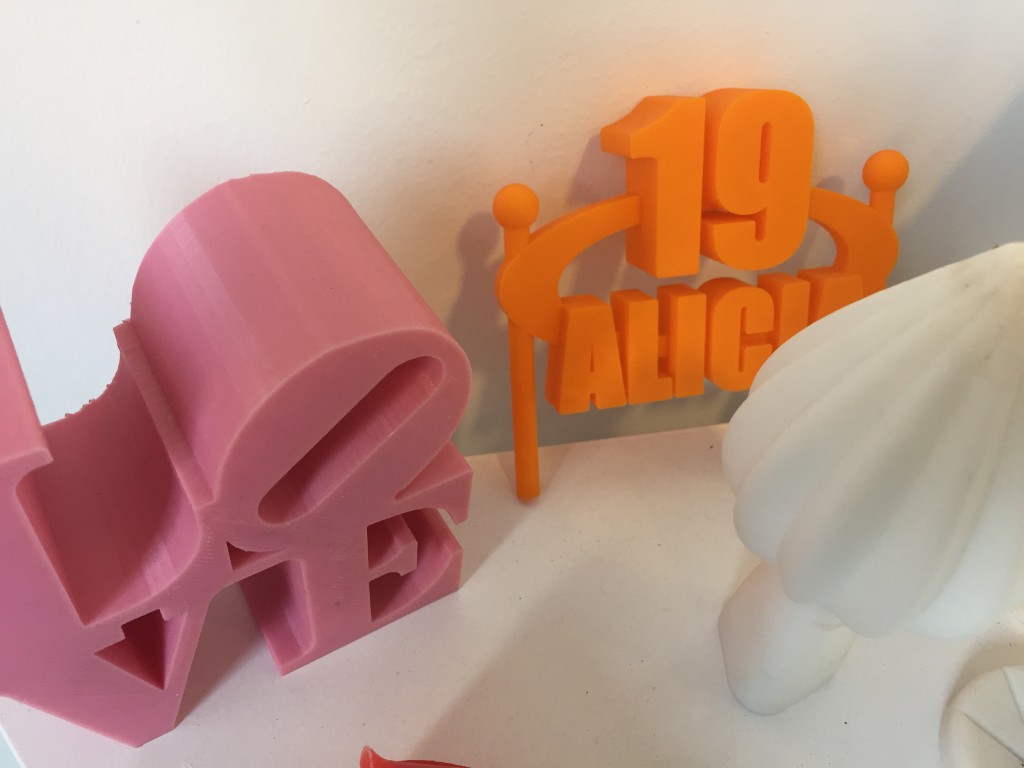 “People come in all the time and they have no idea what 3D printing is about,” Maria continues, “But, perhaps even more importantly, they are totally surprised that they can get access to 3D printing technologies, right here where they live.” Like many (although not all) of the other shops I visited, Entres D is not located in the center of the city but in a residential area. That’s because, unlike Mini-me stores, which are targeting tourists and consumers, 3D print shops such as Entres D, MakersItaly in Milan, and Dimension Alley in Berlin, want to become “neighborhood factories” (or “neighborhood personal factory retailers”) and bring 3D printing to everyone.

Is a 3D print shop in every neighborhood of every city possible? Visiting places like EntresD makes me believe that it is.