When it comes to providing 3D printed prosthetics to kids in need, no one does it better than the volunteer organization e-NABLE. Last August, one father and an avid member of the e-NABLE organization, named Greg Dennison, printed five prosthetic hand designs for his eight-year-old son Luke Dennison (aka Little Cool Hand Luke), who was born without his left hand due to a congenital abnormality. Now, Dennison and e-NABLE are teaming up with Simplify3D, the 3D printing software developers, to help create a superhero-themed prothetic hand for another kid with the same condition as Luke.

Recently, one Cincinnati Hills Christian Academy fourth-grader, Peyton Andry, and his family were connected with Dennison through a mutual friend from Simplify3D. Around the same time, but coincidentally, Peyton’s music teacher had approached e-NABLE about creating a prosthetic device for her young student. And so, almost by fate it seems, Peyton and Little Cool Hand Luke had finally met, sharing both the same condition, and now, 3D printed prosthetic hands. The two kids also had a lot of other interests in common, and discussed Star Wars and 3D printing, while Peyton got to see a 3D printer in action for the very first time.

“The opportunity to be involved with organizations such as e-NABLE and help people like Luke and Peyton is inspiring,” said Clayton Webster, CEO of Simplify3D. “3D printing empowers innovation through technology, but what is magical to me is the outcome that was created by a community working collaboratively to develop a solution and help others.”

“When I woke up that morning, I was thinking about it a lot and I was really excited,” Peyton said. “But it’s not just the people who get the hands who are excited, it’s also the people who make the hands because they’re making something for people who need it.” 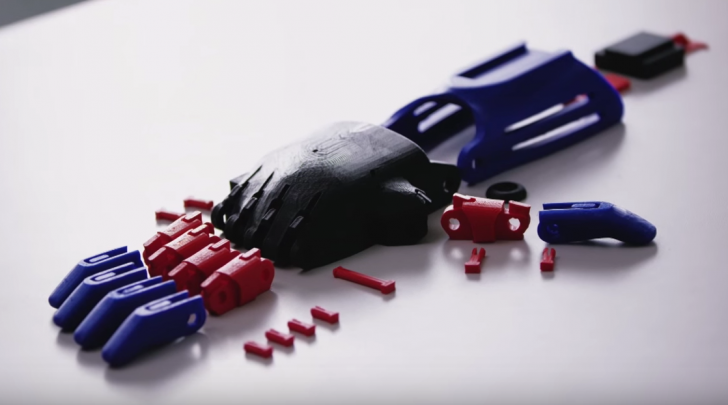 All in all, the project involved a handful of volunteers to help Peyton feel more confident and powerful about his condition, including Greg Dennison, Peyton’s teachers, and employees from Simplify3D. With the 3D printed prosthetic hand, Peyton is now more easily able to grasp items, catch balls, carry objects, and all together feel better about the condition that Peyton calls special, rather than different. Now, along with his new friend Little Cool Hand Luke, Peyton can focus on what they are able to accomplish as young superheroe, instead of what his physical limitations were.

It is clear that the hand means so much more to Peyton than his new physical abilities,” said Steve Andry, Peyton’s father. “The hand produced a sense of confidence and purpose. He gets to be seen more for his character, personality and heart, not for what he may be missing.”