Disney's Fabric 3D Printing – It's Not Just Soft, It's Smart

Over the last few years, we have seen a wide range of materials that can be used in 3D printing, from food to metals, ceramics, and living tissue. Curiously enough, in that time, 3D printing hasn’t quite made the headlines when it comes to regular clothing, textiles, and wearable fabrics. Sure, we’ve had artsy fashion using plastics that’s great for a runway or photo shoot, but nothing that anyone could replace their regular wear with. That might changes soon with increased research and experimental projects in 3D printing fabrics.

One such project is the collaborative work being done by scientists from Disney Research, Cornell University, and Carnegie Mellon University to 3D print soft interactive objects using up to two different fabrics simultaneously, some of which are even conductive. Their printer is based on the principles of layered fabrication and is not unlike those used for paper and metal. In their experiments, each soft object was made using thin layers of fabric, wherein each layer or sheet was cut using a high-powered laser and then bonded to the next with a heat-sensitive adhesive. With their method, you can use almost any off-the-shelf fabric to print a soft object, like this felt bunny.

In developing this method for 3D printing layered fabric, scientists had to overcome quite a few challenges. Cutting fabric is not as straightforward or snag-free as it is for paper or metal. Laser cutting fabric, in this case acrylic felt, would require a separate platform from the printing stage, and the fabric needs to be held in place while cutting each layer. Such issues were resolved by using an inverted laser-cutting platform that sits upside down on the top of the printer. A vacuum table is used to hold the fabric as the laser cuts both the layer profile into the sheet and a surrounding rectangle that provides support to any overhanging layers. Every layer of cloth is prepared with the adhesive and a heating disc is used to bond the layers together. Once all layers are cut and bonded, the stacked object is removed from the platform and supporting fabric is removed manually by hand or using scissors.

The method is similar to other 3D printing processes in many ways, except for where it has been modified to deal with cutting and bonding fabrics. Using off-the-shelf cloths means a host of materials can be used in such a printer, and the build volume, currently at 10″ X 10″ X 10″ can easily be increased for bigger objects. The only significant drawback with the printer at the moment is that it builds at a painfully slow rate.

Having tested the concept, scientists went further to see what else was possible with this kind of fabric 3D printing. They figured out that they could vary and control the stiffness and direction of deformation in different areas of the same object using cleverly placed cutting patterns. These cuts would be made in the layers as the object was being printed and would not been seen on the outside once complete. This means that you could print an object, like this wing, that you could bend or twist one way, but not another. 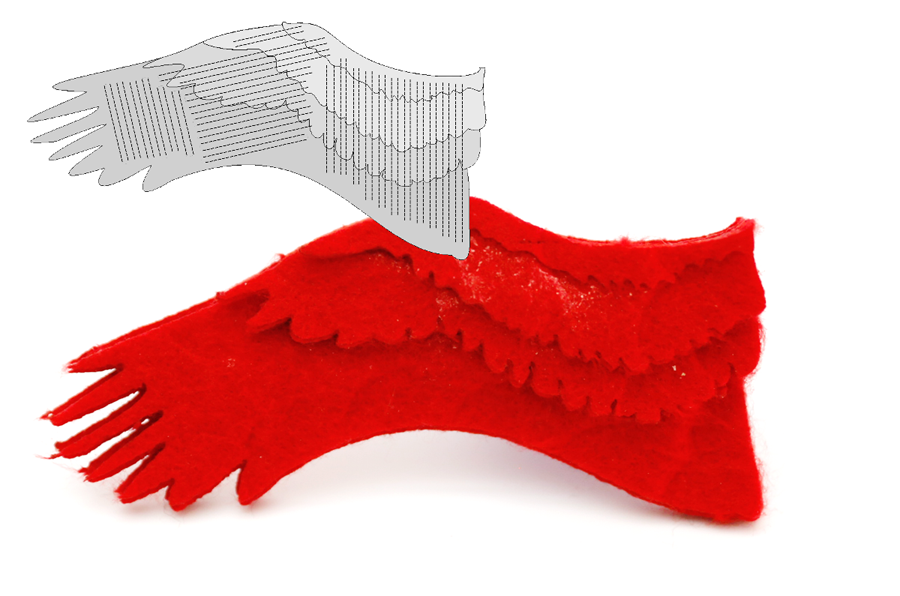 They also explored making one object using two different materials. It basically involved swapping out a layer of fabric of one material with another as the object was printed. They demonstrated this dual fabric printing by making a toy doll using cotton and fleece, as well as one using white and red felt.

This concept was then extended to using off-the-shelf conductive fabrics along with regular non-conductive fabrics to create soft, interactive objects which are electronically functional. So, not only would you able to 3D print soft objects, but also objects with in-built capacitive touch sensors or embedded ‘wiring’. These additional features can be printed automatically by alternating conductive fabric with regular fabric in the object stack. The soft starfish below has an embedded capacitive touch sensor, while the smartphone case in the video above has an embedded circuit that lights up an LED by directly receiving energy from the NFC hardware of a phone. 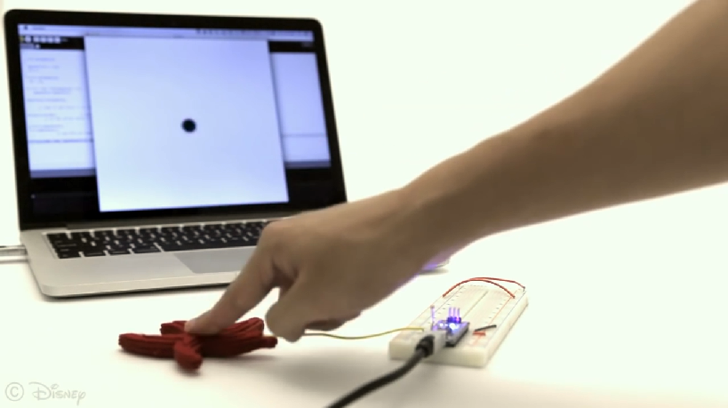 Having developed this method of layered fabric 3D printing with amazing results, scientists have successfully brought two worlds together in one swoop – that of fabric and that of embedded electronics. As recently as April 18, the scientists presented their research and the printer at the Conference of on Human Factors in Computing Systems in Seoul, South Korea. With proven concepts like this, it shouldn’t be too long now for 3D printing fabrics to become as common as using ABS or PLA. Even better, the rise of conductive fabrics and filaments means that printing conformal objects with embedded electronics isn’t so much of a challenge anymore, a considerable widening of the road for personal and consumer 3D printing. There’s nothing gimmicky about this; it’s indicative of a swiftly oncoming future where clothes interact and fluffy toys double up as devices. Who knows, you might find yourself talking to your jeans sooner than you think!