Working amidst so many 3D printing stories, I sometimes get the sense that the tech is used just for the sake of using it — often overlooking its core advantages. I’ve lost count of the number of times people comment on certain projects, saying: “it could have been done better with a laser cutter!” or similar. I’m sure many of you, if you don’t say it yourself, know someone who does!

Well, one company that does understand (and further explores) the ins and outs of 3D printing technology and how to best apply it is Digits2Widgets (D2W), a 3D printing lab based in London. The company provides consultation and 3D printing services for a range of clients and projects, and one of the most recent, albeit ongoing projects, is just hitting the market now – a bird box no less.

Nicholas O’Donnell-Hoare, at Saint H, wanted to produce a 3D printed bird house — dubbed HÛS — and he collaborated with D2W on the design, development and production of this product, which took some unexpected twists and turns to find the optimum specs. 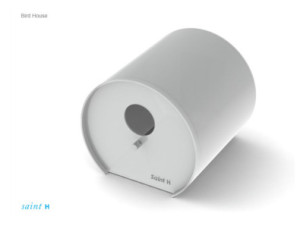 According to D2W: “The original design was very clean and elegant, however the height of the box created by the curvature of the roof, made it an expensive object to print.” D2W utilizes EOS’ laser sintering 3D printers, and based on the company’s pricing structure printing with nylon material, a single bird house of this design would cost £175 to print. Furthermore, because it was an enclosed structure, with a single point of entry, and open internal volume, post processing would be a nightmare, to say the least. D2W’s Design Director, Jonathan Rowley, explains: “ When immediately emerging from the printer, the open internal volume would be full of unsintered (unmelted) nylon powder, all of which would have to be shaken out through the bird access hole. Any remaining powder would then have to be cleared out of the interior with access to the bottom front edge of the interior being especially difficult.”

As is often the (overlooked) case, designing for 3D printing takes thought, and not a little insight. And as D2W points out, the “natural instinct when 3D printing is to produce the object in it’s finished form,” when in fact, thinking, quite literally, outside of the box can produce more economically viable and aesthetically pleasing results. Nicholas O’Donnell-Hoare was determined to do just that and find a way to design around these identified issues.

The solution came in developing a design that could be printed in flat sections, rather like a traditional card model, with the front, back and bottom of the bird house laid out as a sheet, with a crease being inserted into the surface along the line that the ends would fold up in to the vertical position. The roof & sides needed rethinking — the sleek curved shape was unlikely to work but a corrugated sheet with some flexibility built in, might.

According to D2W: “Nicholas went away and his team set about deconstructing the form and designing it as two separate flat elements.” The individual files were sent to D2W for 3D printing. But they were stepping, to a certain degree, into the unknown, because even despite extensive experience, intentionally designing and 3D printing parts that involved bending and folding laser sintered nylon was not something they had attempted before. The questions being asked of the material were: “would it flex without snapping or tearing? When bending the corrugated section, would it do so in a regular way, or would it be a bucking bronco of a bend? Would it even bend at all? There was the distinct possibility, that even when built as a very thin sheet, it would remain rigid like a washboard.”

The results were pleasing, and enlightening, and for this project in particular there were a number of positive outcomes:

The finished product is “a rather more sophisticated object in terms of the details that have been added to facilitate assembly post printing. The cog-like tongues on the front and rear faces of the house add a very satisfying engagement mechanism as well as eliminating any draughts through the structure. They also add to the considerable rigidity of the house once assembled. The corrugation of the curved roof, means that rain water will be guided off the back of the house thus preventing staining of the sides and means that water won’t drip down over the entrance to the house.”

Furthermore, “it is much cheaper to produce the object as it is flatter with less height and less volume. It’s also now possible to package the finished article in an envelope rather than a box as well as giving the consumer a simple yet satisfying assembly project.”

And: “(one of those happy coincidences) the evolution of the design which resulted from the flattening out process have produced a number of visual allusions that we think increase the object’s charm. It now looks like a a cross between a gypsy caravan and a baby’s bonnet.”

Not sure a bird house should look like a baby’s bonnet (I know exactly what they mean, though, because my daughter wore one!). Nonetheless, whether you like this product or not, there is a really important message to take from this project and D2W’s shared experience, namely: “the rather manic focus of attention on 3D printing [that] revolves around printing objects complete in their finished form. This project clearly illustrates that 3D printed things do not have to come out of the machine in their finished form. With an understanding of the materials and their properties, you can carefully design components that once printed can be simply and elegantly transformed in to the finished object. Granted, it takes a little more time, but the result is actually something that is more considered, more elegant, more precious and more fun.”

The HÛS bird house is currently on display at the Design Museum in London as part of ‘The Future is Here’ exhibition.  It will also be on display and for sale at D2W’s forthcoming exhibition “What you CAN make with a 3d printer” being held as a part of the London Design Festival and running from 14-22 September and later in the year at the 2nd 3D Printshow in London in November.