When we wrote about the SolidWorks World expo – devoted to 3D modeling and its applications – last week, I mentioned that “a mysterious company called Mark Forged” would make its debut at the event.  It was mysterious because, at the time the article was published, the Mark Forged website had nothing on it. That’s because the company was waiting to unveil its new and original carbon fiber 3D printer at SolidWorks World.

The Mark One carbon fiber 3D printer has made a huge splash at the event, displaying a machine that almost seamlessly prints, via a process called Continuous Filament Fabrication, parts encased in nylon and filled with carbon fiber.  Watching the video below, you can see the two different filaments fed from two different spools into two extruder heads.  By laying down a long, continuous carbon fiber infill, the prints can achieve a stiffness of 20x that of ABS and 5x stronger, according to the company.

MarkForged, started by Gregory Mark, is a spin-off of Aeromotions, a manufacturer of computer-controlled racecar wings.  Though carbon fiber is strong and lightweight, carbon reinforced parts could previously be obtained mostly through CNC milling, which was a costly and labor-intensive process. Without other options in the 3D printing market, Mark was led to develop the Mark One. This new process allows him to print parts with a higher strength-to-weight ratio than aluminum, leading the creator to tell Popular Mechanics, “We say it’s like regular 3D printers do the form. We do form and function.“

It’s not extraordinary for 3D printers to attempt such a process.  Proto-Pasta demonstrated that it has developed a carbon reinforced PLA and Nathan Armstrong, a composite specialist, is pursuing a 6-axis continuous carbon fiber reinforcement printer.  MarkForged is however, as far as I’m aware, the first desktop 3D printer to execute a device for such a purpose, with continuous carbon reinforcement instead of portions of carbon mixed partially throughout a plastic feedstock, as seen with Proto-Pasta.

The company’s founder explains that his CFF process could serve the automobile industry and help build stronger prosthetics as well: 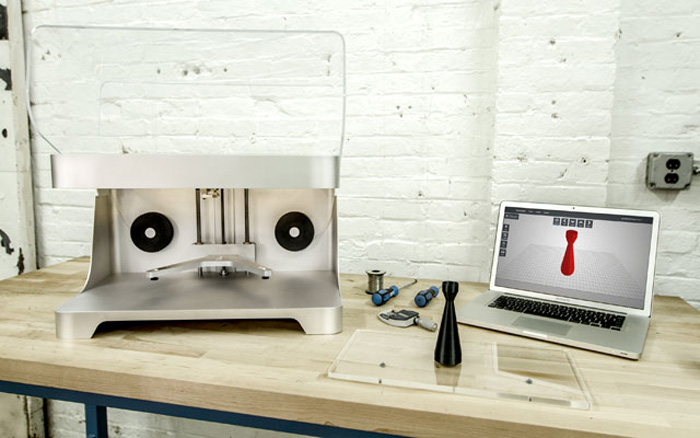 “There are a bunch of people who are interested in the prosthetics side,” he says. “There’s a whole fit component. It has to fit on your body. That’s something that’s more art than science, you want to print out a whole bunch of different versions and test them out But then when you have your final version, you want to make exactly that, but really strong. [With] this printer‚ once you want to make it strong, you print it in composites.

It’s a material that everybody knows, but probably most people haven’t used. So we made the price low and you can start using it. We wanted to make it really easy for people to start printing with it, so they can explore prosthetics, custom bones, tools and fixtures.”

Because the printer is a dual-extruder machine, it can also print other materials, as well, such as the company’s own PLA, nylon, and, even, fiberglass filaments for fiberglass reinforced parts.  The machine has a build volume of 305mm x 160mm x 160mm (12″ x 6.25″ x 6.25″), modelled after the long-axis CNC machines. It can achieve a layer resolution of 100 microns, when using the FFF process, and 200 microns, when using the company’s patented Carbon Filament Fabrication technique.  The Mark One can also be connected to via WiFi, USB or SD card.  Using kinematic coupling, the manufacturer claims that the bed is easy to level.

The Mark One is set to be released in February at a price of around $5,000, which Mark hopes is affordable enough for average consumers to afford.