Nathan Armstrong is a composites specialist who is known for creating unique composite materials for sustainable purposes. A few years back, Armstrong was in the process of designing an electric car called the Kestrel[1] that was created from a hemp biocomposite, making it lightweight and impact resistant due to the nature of hemp.  It’s difficult to determine what the fate of the Kestrel was, but it appears as though Nathan has moved onto new things, like developing a method for 3D printing a continuous carbon fibre composite.

In 3D printing, it’s difficult to reinforce an object with a continuous fibre.  Instead, reinforcement is done in piecemeal fashion, limiting the use of the technology in high performance industries, like aerospace and robotics.  Using his proprietary 6-axis 3D printing method, however, Armstrong may have figured out a way around that problem. The 6-axis printer will have a wide-range of motion, creating a “free space”, so that it can print a carbon-reinforced thermoplastic filament continuously.[2] As Composites World puts it, “the system also allows for more complex parts to be built with multiple parts that are subsequently consolidated together. Further, additional heads will allow in-process stitching and weaving of fibers.” 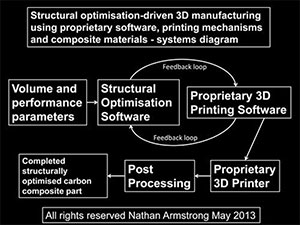 CAD models could be optimized for 3D printing using any number of design tools, but Armstrong is working on his own software that would put such a model into a feedback loop system that ensures that a part is ready to be printed in free space. Armstrong believes that this process will make the entire production process that much more efficient, saying, “It skips the entire traditional engineering design process and produces highly optimised parts with zero material waste.  I believe this is the future of manufacturing structural composite parts.”

He estimates that his proprietary software and printing technique will get to market in about 3-5 years time and is in the process of seeking financial partners and developers to complete the software development and bring the project to fruition.

[1]If you would prefer a link that is catered to a pro-legalization audience, watch this funny video.

[2]In my own head, without any access to Armstrong’s designs, I’m picturing something like what Nicholas Seward, of the RepRap Simpson, is working on, which is a modification of this. Then again, I don’t know too much about engineering.