What sound does a tree make when 3D printed in such a way as to demonstrate complex systems in theoretical physics? Probably something very similar to the sound of any object being 3D printed. The sound isn’t what’s important here! What’s important is that 3D printing has proven itself useful once again for creating models of detailed scientific and mathematical phenomena, as researchers at the Imperial College London have used the technology to illustrate the behavior of complex systems in theoretical physics.

In a study published in EPL, researchers at Imperial College have developed an approach called “Sculplexity”, in which complex systems can be visually portrayed with 3D printed models.  For about 15 Euros and in about 8 hours, the group was able to 3D print one example of a complex system, an 8 cm3 model of how forest fires begin and spread over time. 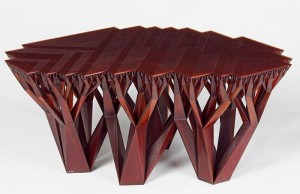 Dr. Tim Evans, co-author of the study, explained that the idea sprang from the 3D printed table he’d seen at the Victoria and Albert Museum: “The work was inspired by a visit to the Victoria and Albert Museum in London where I came across the first ever 3D printed object the museum had acquired. The object was a table inspired by the tree-like structures found in nature, which is an example of a branching process that is commonly encountered in complex systems in theoretical physics. This led me to think, what other processes familiar to physics could be turned into a 3D printed object?”

A complex system is one in which interconnected parts change one another over time in such a way as to reveal patterns on a large-scale. Living things are complex systems in that the behaviors of cells interact in ways that, when you zoom out, you see a living, writhing thing.  Examples include: you, me, a piece of fruit, you get the idea. Models of complex systems are created by setting up parts in a base state that are altered in time as a response to a set of rules. In the case of a forest fire, the overall spread of the flames is determined by the proximity of each tree to every other tree. Evans and his group were able to represent the growth of the fire with the Z dimension representing time, 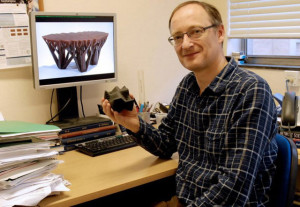 The basic idea is simple. A 3D printer builds up its object in layers. So the height of the object can be thought of as time. Suppose you have a mathematical model, which defines a flat, two-dimensional picture that evolves in time — typically this will be a grid with some squares full and some empty.The mathematical model will define at each point in time what the printer should print at one height. The next step in the model will then define what to print on top of the first layer, and so forth. The result is a 3D object which shows how the mathematical model has evolved over time.

The result is the black object held by Evans in the picture above — sort of starts out as a point, grows upwards, and branches outwards with time. This three-dimensional graph-object could allow students to understand complex systems in unique ways, with Dr. Evans suggesting that 3D printed models of heartbeat anomalies and the spread of disease could help others visualize such phenomena differently, saying, “There may be many other examples and we just hope our rather literal translation from theoretical model to 3D printer output stimulates others to get creative.”

I don’t know if they know this, but I’ve 3D printed my own models of complex systems: I’ve printed my wife.