Back in March, we reported on the newly released material from one the leading 3D printing filament manufacturers, the Netherlands-based colorFabb, the colorFab_HT. The filament, which was produced with Eastman Amphora’s HT5300 3D polymer,  is a professionally-driven filament that provides durability, toughness, and high-temperature resistance for advanced 3D printing applications. Having already partnered up with the Spain-based 3D printing company BCN3D Technologies to provide the colorFabb_HT with their Sigma 3D printer, which is an FDM printer with a dual independent extruder system, colorFabb is sharing the stage with yet another company at Hanover Messe, one the world’s most prominent technology trade fair held annually in Hanover, Germany. 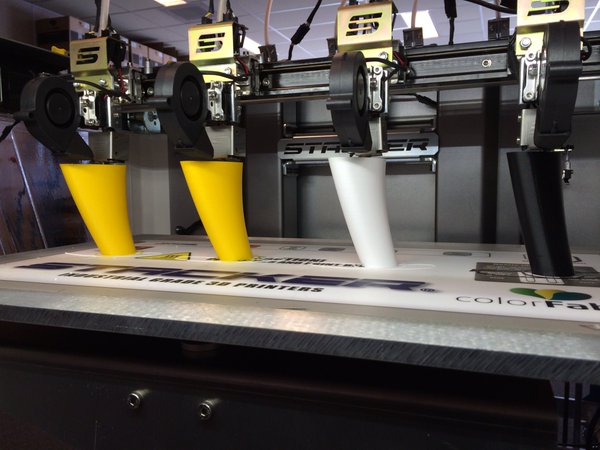 Starting today (up until April 29), at the Start-up and Innovation Square (Hall 4, Stand C52), the 3D printer manufacturer STACKER will be unveiling their latest industrial-grade FFF 3D printer, the S4. The S4 3D printer, which is currently available for $9,995.00, has a large build size of 14 x 20 x 25 inches, and is able to print at high temperatures of up to 300°C. In order to display the adequate power and speed of their newest 3D printer, STACKER will be utilizing the colorFabb_HT filament with the S4, melding together an industrial-grade printer and professional-grade material together into a joint display at this year’s Hanover Messe trade fair.

Unlike most PLA-based materials, the Eastman Amphora HT5300-based filament by colorFabb is able to withstand temperature of 100°C, giving it a high melt strength that won’t degrade in highly heated situations. Though this isn’t the first time Eastman and colorFabb have released a filament in tandem, they’ve also collaborated to bring us the nGen and colorFabb_XT filaments in the last year. But, the HT filament is the most durable and professional-grade filament that these two companies have produced together. By bringing an industrial-grade material and 3D printer to a more consumer-friendly price and market, colorFabb and STACKER’s collaboration is an ideal fit for the two companies, as they both aim to increase 3D printing quality while keeping the price close to the level of the consumer market.