While visiting the Hamlyn Centre at the London-based Imperial College, Chinese President Xi Jinping and the Duke of York, Prince Andrew, were reportedly amazed while witnessing 3D micro-printing firsthand on a Nanoscribe 3D printer. The German-based 3D printing company Nanoscribe GmbH, who specializes in nano- and micro- 3D printing, have engineered the Photonic Professional GT to allow for micro-printing objects that are sometimes even too small for the human eye to see on its own.

Professor Yang was able to impress President Xi Jinping and Prince Andrew with this breakthrough 3D printing technique, which uses a process called Two Photon Polymerisation and entails a pulsed laser that joins molecules together to build objects layer by layer in the same fashion as other 3D printers do, except at the nano level. The outcome of this process is an unbelievably detailed nano-print, which can be used for anything from creating tiny trinkets to saving lives within the medical field.

For the visiting Chinese president, the Imperial College London team 3D printed a replicated section of the Great Wall of China that measured just 100 micrometers (the width of a human hair), while Prince Andrew received an even smaller panda print, which measured to an astonishingly tiny 50 micrometers. “The height of the panda is approximately 50 micrometers, or half the width of a human hair”, said Imperial College London PhD student Maura Power, who has been utilizing this advanced printing technology under the supervision of Professor Guang-Zhong Yang.  With this technology, finely detailed prints can be made as small as 150 nanometers, and the Nanoscribe printer is certainly capable of creating much more pivotal objects beyond miniaturized gifts and relics. 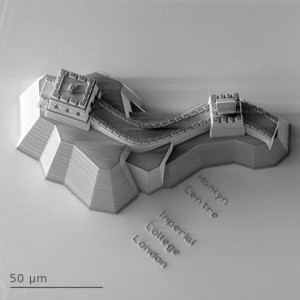 As thoughtful and unique as these nano-printed gifts may have been, the potential implications of Nanoscribe’s Photonic Professional GT point to much more important developments then micro-replicated artifacts and figures. This printing technology is being used to develop advanced medical practices that will help with previously difficult processes such as delivering drugs via micro-robots, targeting specific cancer cells, and even assisting in difficult eye operations. But as astonishing and serious as the potential for the Photonic Professional GT 3D nano-printer may be, sometimes a playful print of a microscopic panda or the Great Wall of China is all that is needed to showcase the Nanoscribe’s true innovative spirit.