cb-printer is a relative newcomer to the entry-level market space for 3D printer manufacturers and is commercially available now. The man behind the development of the cb-printer is Bartosz Cieluch, a Polish tech enthusiast with a strong creative mind. With CB-printer.com he is aiming to become the leading producer of 3D printers for domestic use and for small and medium enterprises.

cb-printer was the first company in Poland to develop and supply 3D printers for home use. One unique feature of the cb-printer is that its frame is constructed entirely from aluminum. Supplied as a kit (£1050) or assembled (£1200), the printer weighs 8.2 kg and the entire kit is specially packaged to protect against any transportation damage.

cb-printers are manufactured with laser precision and the manufacturer ensures the quality of the printer. The shape of the printer itself is unusual, which, it is claimed, makes it particularly stable and therefore capable of printing at higher speed than comparable printers — without jeopardizing the print quality. 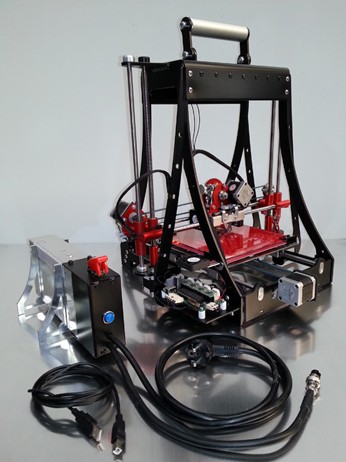 Software: Based on OS

The cb-printer.com was on display at the 3D Printshow in London last weekend. Read more at http://cb-printer.com