You can buy a stake in Retouch3D

The company behind Retouch3D is looking to build on its Kickstarter success with a £200,000 round of funding on investment platform Invesdor.

It’s a simple concept and the end result is something like a heated Dremel tool for the 3D printing world. 3D printers do have a habit of producing prints with a little excess resin in crucial places. So the concept of a handheld tool that is purpose-built for removing the excess, digging out grooves and just adding that final touch makes sense.

The end result is a multitool with a number of heads that offers controlled heat and optional vibration to effectively saw through or smooth bumps and ridges. You can even control the temperature with a smartphone, for some reason. 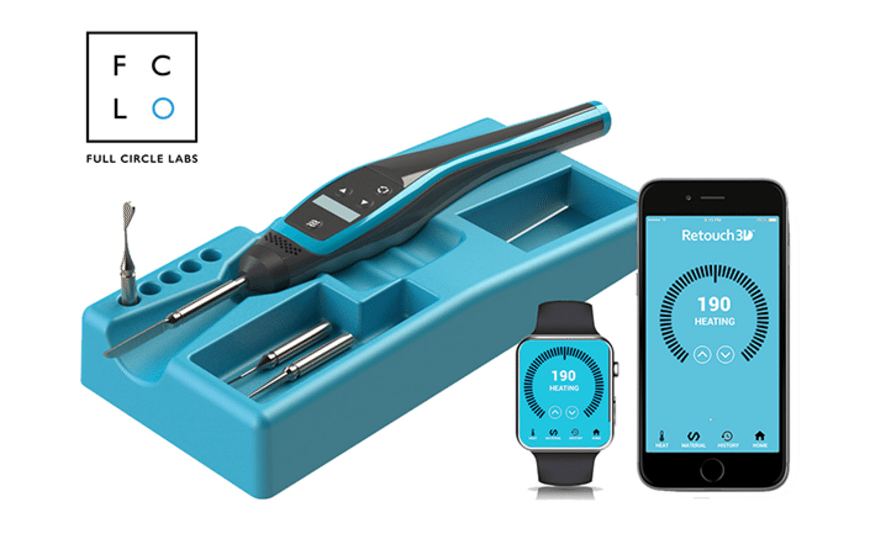 A smash hit on Kickstarter

Kickstarter loved the concept and when the product launched it raised 197% of the required funding in just 48 hours. 400 pre-orders were part of the round of fundraising and the interest was such that the company already has resellers and distributors in place in 16 countries. Retouch3D is pretty much a nailed-on success before it hits the shelves.

Now Full Circle Labs, the company behind the Retouch3D, wants more money to develop a next generation soldering iron and a professional-grade wax tool for dental technicians.

With 3D printers advancing at a frightening rate, we are now tantalisingly close to the point where we can print circuit boards and build electronic goods at home. Soldering will become an even more important part of the home hobbyist and maker’s arsenal of tricks. So it makes sense for Retouch3D to go after this home creation market.

Dentists, meanwhile, use wax models to create casts of our teeth to prepare treatment plans, implants, crowns, veneers and bridges.

Striking while the iron is hot

It’s essential that they have a precise finish and heated tools like the Retouch3D are perfect for the purpose. Ironically, 3D scanners and printers should eventually render these models redundant, but at the moment wax is still a critical part of the process and anything that saves the technician time will be a welcome addition to their toolbox.

“We have received huge interest from distributors and resellers across the world looking to sell the Retouch3D, however, as we have developed the platform and engaged with customers we have identified higher volume and higher value markets beyond 3D printing,” said Phil Newman, one of Full Circle Labs’ founders.

“These opportunities have led us to revisit the crowdfunding community as we look to build the capital needed to support the product and business development required for expansion into these new markets.”

Invesdor itself is an interesting platform that works very differently to the perennial favourite Kickstarter. Investors don’t just get an early bird offer on the item and a bonus gift, they get a share in the company.

There are more of these online crowdfunding sites and they will certainly become more popular. Kickstarter will always have a place, but more and more people want a return on their early investment and the likes of Invesdor could fill a much-needed gap.

There’s a long road ahead, at the time of writing it had raised £2,292 ($3,313) from four backers, but we wish them well. We’re pretty sure you’ll be able to buy your Retouch3D before too long. Of course you could like it so much, that you want to buy some of the company.