By turning trash into currency, The Plastic Bank hopes to turn the world’s expanding problem of plastic waste into a business opportunity for impoverished communities and countries.

Last year Shane talked about The Plastic Bank while they were in the midst of their successful crowd-sourced fundraising drive on Indiegogo. Essentially, The Plastic Bank is a for-profit recycling program that will operate in impoverished or underserved countries and communities where local governments don’t have the resources or sadly the desire to run recycling programs. Locals will be able to collect plastic waste and exchange it for credits towards micro-loans or to use to have new products 3D printed from the recycled plastic.

The world produces 100 million tons of plastic each year, and only a small fraction of that plastic is ever recycled. Most of it ends up in our landfills, where it will slowly break down into toxic chemicals, and a shocking amount of it ends up washed away into our oceans. Plastic waste is the number one man-made object that sailors report seeing while out at sea. 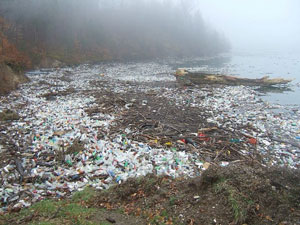 Many readers will likely have heard of the Pacific Ocean Garbage Patch, the massive floating garbage island made of 3.5 million tons of our unrecycled trash. But the Pacific Gyre is only one of five massive ocean gyres, the ocean currents that circulate around the planet. There are dozens of smaller gyres, each of them endlessly spinning and churning our waste around our planet’s oceans depositing trash, mainly plastic, along the coasts of every continent. Wealthier nations and communities can afford to collect up that trash and recycle it, or more likely deposit it into another landfill where it will become another communiy’s problem. But poorer nations or nations with newly emerging economies often have much greater divides of wealth and poverty, so much of the plastic waste ends up being forgotten or ignored. However as the piles of plastic waste begin to grow ever impossibly larger, it is a problem that is rapidly becoming difficult to ignore.

As the first Plastic Bank is being readied to open in Lima Peru, they released a video detailing how the system will work and why it’s important. [Warning: the video contains the musical stylings of U2, so some of you may want to turn the sound off.]

The ethical business model isn’t a new concept. Many businesses have made being an ethical partner in their communities as integral to the company’s success as profit. Recycling plastic is also not a new concept, but giving small poorer communities options to deal with the massive amounts of trash that they are forced to live with, can potentially change the waste dynamic in these countries. In Peru, where only 2% of all trash is recycled, locals will be able to collect plastic waste and exchange it for tools, household items and ultimately 3D printed goods made from the very plastic that they collected. Not only will this clean up their environment and remove potentially dangerous and deadly plastic waste and contaminants from our oceans, but it will put useable goods back into their communities where they can help improve the locals’ quality of life. Additionally this is a completely new and untapped industry that can be monetized by the locals and turn them into the owners of their own small businesses.

Make no mistake, as stated, The Plastic Bank is a for profit company. Most of the recycled plastic will be sold off to manufacturers and turned into new plastic products. You will most likely be purchasing 3D printing filament made from recycled ocean plastic. And I’m sure that if their business model ends up being successful they will make themselves very rich. But the world’s excess plastic was always going to end up being recycled. Just like that pile of dirty dishes in your sink, plastic waste isn’t going away and will need to be cleaned up at some point. But by giving poorer communities an important and enriching role in that recycling process it allows them to directly benefit from it.

For better or worse our planet’s nations seem to have settled on Capitalism as our societies’ default setting. Historically speaking, Capitalism has done a pretty good job of leveling the playing field and making comfortable lives attainable for a much larger number of people than ever before. There are of course drawbacks, Capitalism is easy to manipulate and often relies on poorer nations and communities to artificially sustain wealthier ones. But if The Plastic Bank is successful, then maybe using our planet’s resources ethically and enriching our poorer communities will become the rule, not the exception. Of course adding a profit motive isn’t going to hurt.