We have covered Bryan Oknyansky’s work since the very beginning, when he launched his Shoes by Bryan, customizable 3D printed shoes online shop. So we were extremely pleased when he entered fashion bible Vogue’s MUUSE x VOGUE Talents YOUNG VISION AWARD Accessories 2014. 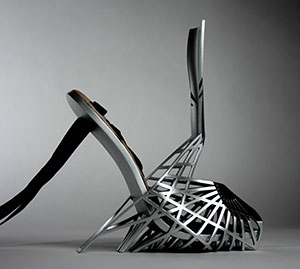 We are even more pleased now to tell you that it was not just a publicity stunt: his amazing Titanium 3D printed shoes have been selected by Vogue Senior Fashion Editor Sara Maino and made it into the Top 10 finalists, where they will compete for a feature on Vogue.it and a for a designer profile page on the MUUSE website.

To help Bryan win you can vote for his work on Vogue.it’s dedicated page. Voting ends on March 5th and those who vote and share their vote on social networks tagging it with #BryanOknyansky, can enter into a competition of their own and win a pair of Bryan Oknyansky’s 3D printed Split Heels shoes.

At the time of writing, Oknyansky is standing in fourth place but, with about 10% of voting preferences. However, other than the fact the the visibility he has gained so far and the recognition he has brought to 3D printing as a viable method for creating high level fashionable women’s shoes are to be considered the real victory, there is still some time to vote to get him to the top.