The 3D printing industry has so much to give and it has only but begun. Now that the technology is widespread, amazing revolutions happen every few months, so that the ultra-fast CLIP technology announced by Carbon 3D just a couple of weeks ago has already set in motion a cascade of innovation. University of Buffalo graduate student Bo Pang’s “Continuous DLP” (which I will hereby refer to as “C-DLP”) technology is already expanding on the Carbon 3D approach, with a low-cost, open version of layer-less 3D printing.

Upon learning about the project, I had no time to do any validate his technology; I just got in touch with Bo and that was enough to understand that continuous DLP is no bluff. It is the natural evolution of DLP technology and it seems strange to me that companies like EnvisionTEC, that have made high quality DLP their core business for years, did not come up with this before. C-DLP does require a lot more work to become a commercial technology, but, judging by the ease with which Bo speaks about his work, I am fairly sure this is going to happen soon enough. It’s like when you complete a level in Super Mario: the first time seems impossible, but after beating it once, it becomes a piece of cake.

I am not going to pretend to understand fully how this works at a mechanical level. If you – like me – are not a mechanical engineer or a highly skilled maker, you should probably simply consider C-DLP like a “movie” made of an STL file, while the process used with standard DLP more closely resembles a slideshow. That is why it is so much faster and trequires an oxygen membrane or, in the case of Bo Pang’s technology, an air membrane. This is used to “flatten” the liquid resin in the tank after photopoymerization occurs, so that the following portion of an object (we are no longer talking about layers because this is a continuous process) can be cured more rapidly, in a seamless way. “In traditional DLP, we need to move the cured layer out of the way and wait a certain amount of time before projecting the next ‘image’,” Bo explained, “the membrane makes it possible to do this continuously, without intervals in between.”

In fact, the process is not truly continuous in the same way that a movie is not a continuous flow of images.  In actuality, the process just sees more images moving much, much more quickly so that they seem seamless. What amazes me is how 3D printing history is repeating itself, only at a much faster rate: Stratasys invented FDM in the 90’s and in the late 00’s Makers used it as the basis for FFF technology. Now Carbon3D has invented CLIP and, not even a month later, students are proposing CLIP’s “open source version”. Bo Pang did not name it. He and his team are not even planning on making a business out of it (not enough business experience, they explained), but they are going to publish their work and believe that this is just the beginning.

The main distinction between C-DLP with Carbon 3D’s technology, as I understood it, is the nature of the inhibiting membrane: Carbon 3D’s is pure oxygen and, while this is more expensive to produce, it does offer more freedom in the type of objects that can be built. The Buffalo students’ Continuous DLP membrane is simply made of regular air. “This machine still has a lot of issues that need to be solved. For example, while it does work well on small sized, hollow objects, we cannot build solid cylinder-shaped objects. In the future, we will also have to work on developing the pure oxygen membrane. However,” he adds,“once you understand the concept of the membrane to inhibit polymerization, the technology is rather simple and I am fairly certain there are many people working on it already, which means that this technology will develop very rapidly.”

Bo Pang, who is currently a graduate student at the University of Buffalo and a Research Assistant at the UB Additive Manufacturing Lab, has been working on this project for less than one year, since summer 2014. In the one year and seven months that he spent at the AM Lab at University of Buffalo, he has already worked on designing a micro-SLA 3D printer upon request from the University’s biomedical lab. He has also worked on traditional DLP 3D Printers to familiarize himself with the technology.

Bo told me he intends to continue working in additive manufacturing and believes it to be the dominant manufacturing technology of the future. His dream is to work in the R&D department of a large 3D printer manufacturer, to contribute to the development and advancement of the technology. If I were EnvisionTEC, or one of EnvisionTEC’s competitors, I would seriously consider hiring him. (And in that case you can contact him at bopang@buffalo.edu). 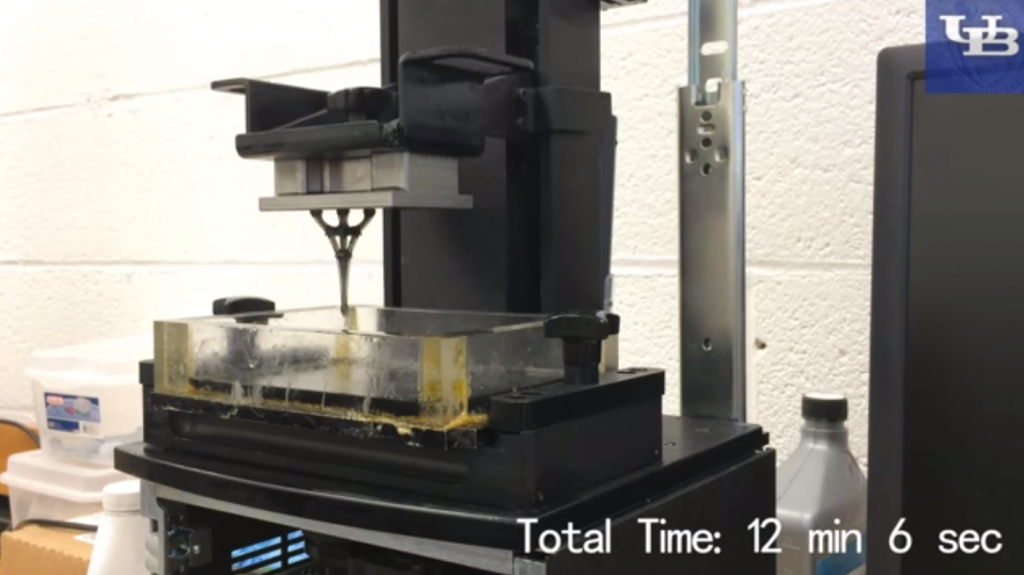