BeamBrush is a Kickstarter project turned commercial product, which brings some techy goodness to something as mundane — and yet necessary — as brushing your teeth. The toothbrush contains a Bluetooth chip and is paired with a dedicated iOS/Android app, enabling the user to keep track of his/her own  – or even more likely their children’s – brushing habits. The reason for this invention being showcased here on 3DPI, however, has more to do with the design & manufacture methods than the pure spec aspects – BeamBrush is, you guessed it, prototyped and initially manufactured using 3D printing.

On the outside the brush doesn’t stand out that dramatically from the contemporary crowd. Size-wise the BeamBrush might be something taking a bit getting used to – especially with kids used to the traditional non-motorized toothbrushes. With a length of 8” and a 1.1” diameter the BeamBrush is in the territory of conventional larger electric options. The choice of colours is simple – you get to pick the BreamBrush either in pink or in blue. The whole thing is powered by a regular AA battery, which is stated to have a three month lifespan according to the manufacturer.  In addition, because using new tech might not be enough of a reward for some. Beam has thrown in some more tangible rewards for keeping your mouth in tip-top shape via the Kiip reward app. 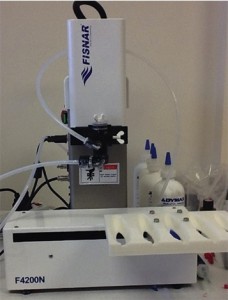 But the real interesting part of the story comes from the actual design and manufacturing process itself instead of the functional part – for me at least. The company behind the Beam first used a Replicator (1) for prototyping – with a brush holder / stand being one of the first objects to come out of the printer. They later upgraded to a 2nd generation model from MakerBot, but in other sectors everything was kept in-house – literally – to save time & money. The company also used 3D printing for creating other project-specific parts with the Replicator, such as the electronic assembly robot’s holding bay for the brush – pictured on the right. Cost-wise being able to use the initial 3D models of the actual brush for further development enabled Beam to iterate faster and thus cut down more of those critical costs.

But the length the company went with 3D printing as a manufacturing tool is quite unique – they even used the Replicator for designing and printing out a camera holder for taking product shots. Unfortunately though, not everything was possible with the 3D printer — we’re not there yet! In the final stages of the process the company, the core of which is formed by three University of Louisville graduate engineers, sent the Makerbot-created spec to the mould maker for, well, the mould. But after that they were quick to get back on the DIY track and Beam eventually also built their own supply chain and also do all of the packaging themselves. 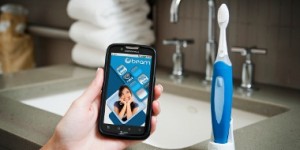 For me this is a great example of how start-ups can benefit from using 3D printing in all phases of the development – both to cut down on costs and reduce the length of the process and also, importantly, maintain control of the process and the actual outcome.

I’m really looking forward to hearing similar stories to this emerging and bringing them to you.

All images courtesy of Beam and Medcity News