There is an axiom, or mantra if you will, that holds true for detectives and trends in industry: follow the money. While GE continues its massive funding of additive manufacturing, engineers at the Italian aerospace company Avio developed 3D printed light-weight blades for jet engine turbines. The blades, of which eight were produced in 72 hours, apply to the GEnx jet engine. Avio utilized Arcam’s EBM 3D printing process, which involves an electron blast to bolster product strength. The result justifies the lavish funding and hints at the next wave in this swelling sea of additive manufacturing. 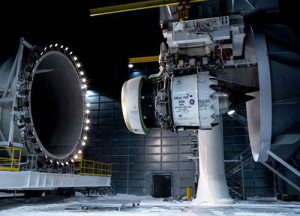 In order to understand the method employed by Avio, it might help to take a few courses in engineering and chemistry, but without such a luxury, the basics will suffice. Using a beam of electrons accelerated by a 3-kilowatt electron gun, the EBM process fuses layers to form blades from a titanium powder. This affords Avio the ability to produce blades four times as thick as traditional manufacturing largely thanks to the increase in power, 10 times more than laser beams would allow. With the increased power, stage 7 blades can be produced at a faster rate and with improved quality. “This is very competitive with casting, which is how we used to make them,” says Mauro Varetti, advanced manufacturing engineer at Avio.

The process was utilized to meet the demand for a transformation in production intended to cut cost yet improve the quality of manufacturing. Avio did not act alone, and they teamed with Sweden’s Arcam due to their EBM technology. Titanium aluminide (TiAl) is not an easy material or cheap material to manufacture, and traditional methods for production have proved costly and time consuming. In what continues to be a trend with 3DP technology and R&D across industries, additive manufacturing creates a new avenue toward production instead of tinkering with traditional methods in order to squeeze what little efficiency might be left in them. Because the EBM method allows workers to preheat the powder, it is easier to control the part’s properties thereby increasing its durability which was often left fragile with excessive parts and manipulation in traditional modes.

If looking for definitive evidence that this new method is not a fad, but a step in a revolutionary direction for manufacturing, one may look to the construction of plants, 20,000 sq ft in Italy, and another one in Alabama, full of fresh funding. When something receives billions of dollars for production, it is because it promises to make more for the investor. It is not just blades under development, other parts, integral components, are now ideally produced with 3DP technology, and as the man who runs the additive manufacturing programs at GE Aviation, Gregg Morris, claims, “The sky is the limit.”