The initial wow factor of 3D printed construction may have worn off for many people, with the original hype giving way to the numbness associated with our stimuli-driven world 2.0.  Now that the hype has worn off, however, true research and development can begin, seeing such headlines as “Chinese Company 3D Prints 10 Houses in 24 Hours” temper into “Mobile 3D Printer Seeks to Bring 3D Printed Construction On-Site”. 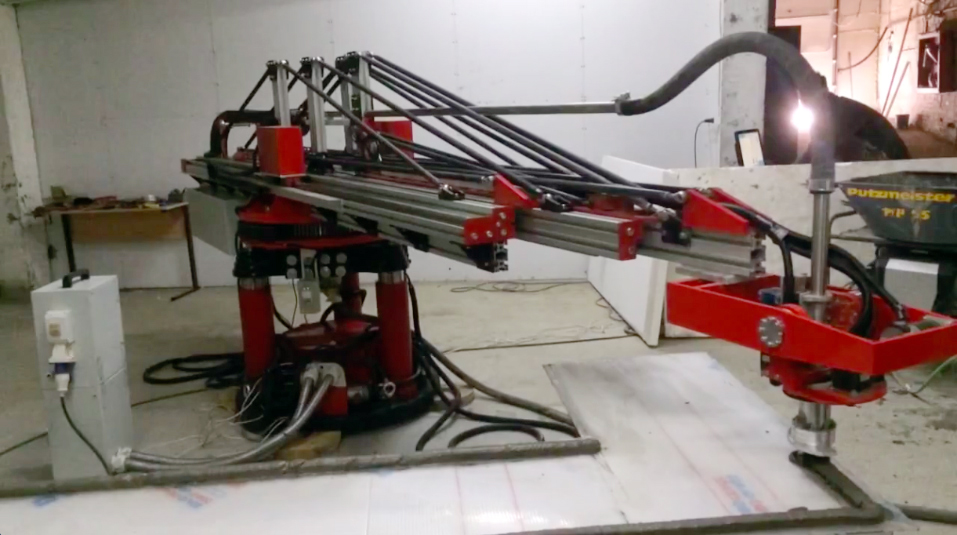 After WinSun‘s 10 3D printed houses caught the public’s eye, we’ve since learned that the 3D printing was performed off-site, in pieces, before assembly was performed in that day-long time frame. Not only that, but the IP behind the project was said to be lifted from its original inventor, Dr. Behrokh Khoshnevis of Contour Crafting. Now, the excitement fades into steady progress, which sees new companies like Branch Technology and Apis Cor transform the hype into the foundation for an actual industry. In the case of Apis Cor, the company hopes to bring mobile 3D printing to the world of 3D printed construction so that 3D printing concrete and other building materials can be performed on-site.

Unlike the large gantry system implemented by D-Shape in the US and Specavia in Russia, Apis Cor has designed a crane-like 3D printing arm that sits above a rotating base. The extruder, which hooks up to an auxiliary concrete pump, swivels around the base, expanding its range to more than 100 square meters in space, but reducing its footprint.

This, the company claims, reduces the amount of manufacturing costs, to produce the printer, by 70% and will allow the company to “print a whole house in any place in 24 hours”. An Apis Cor representative adds that the “printer uses standard construction machinery for delivery, assembles on any surface, without preliminary preparations and checkout works and is ready to start in less than half an hour. This technology also features low energy consumption and no construction waste.”

Apis Cor has developed a working prototype, demonstrated in the video below, but, to refrain from the initial hype caused by 3D printed construction, it’s worth noting that the video does not show a complete house being 3D printed in a single day. Nor does 100 square meters sound like the size of a house that I would personally like to live in, though it may be all that some can afford. More importantly, the system is mobile and could be used to 3D print sections of a building, 100 square meters at a time.

So, for now, Apis Cor’s technology is only a proof-of-concept, like many of the construction 3D printing technologies out there and 3D printed construction is still only early stages yet.  The proof of concept, however, is an important one, demonstrating a design that thinks outside of the box of gantry systems, potentially adding one more tool to the toolbox of 3D printing in architecture.