Late last year three students from Watford Grammar School for Girls won the Wired 2013 Next Generation App Competition for a futuristic game of tag that they developed, called the It Game. The app uses GPS and smartphone technology to track players while they attempt to hide from whoever is designated as “It”. Not only did the students win first place, but they also won another prize for submitting the most quality entries to the competition. 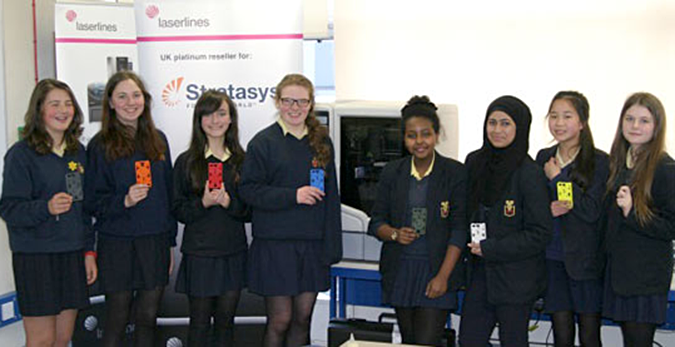 Watford Grammar School for Girls was founded in 1704 as a charity school, however it was moved to its present location as a secondary school in 1907. While they do hold some places at the school for students with exceptional academic or musical aptitude, the school is generally open to girls of any ability. Despite this, the schools GCSE – General Certificate of Secondary Education – scores remain extremely high, and in 2007 they achieved the highest scores of any non-state school in the UK. 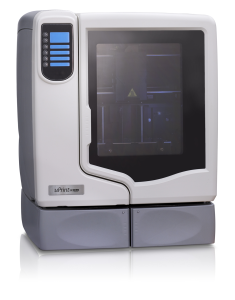 Basically, they make smart kids at Watford, and the students who brought their apps to the Wired competition are no exceptions. For winning, their reward was a 3D printing workshop sponsored by Stratasys and one of its UK resellers, Laser Lines Ltd. The workshop gave them the opportunity to be 3D scanned and turned into a 3D printed “photograph”. But most exciting was the cell phone case that the girls were allowed to design and then 3D print on a Stratasys uPrint themselves.

This was a student named Kate’s first experience with a 3D printer, and it seemed to have left an impression on her. “The actual process of 3D printing was fascinating, as we were able to view the object being printed. I was most astounded, however, when I learned of the huge variety of uses 3D printing has. The printers could print everything from intricate ‘moving’ phone cases to human tracheas!”

Another student named Emma had a more practical reason for being impressed. “I am sure that in the future 3D printing will become the norm so introducing it into school is incredibly important. It will also open up a whole new field of creativity, giving students the opportunity to build and design things that will have a huge impact on the world.”

And, of course, she isn’t wrong. 3D printing is here to stay, it’s become far too important a part of the prototyping and manufacturing process at this point to suddenly be forgotten. And while 3D printing at home is still rare, once the technology matures further, it is bound to become more and more common. But there are other reasons for introducing 3D printers into schools, and it’s simply because it lets children hold tangible validation of their imaginations. They can make their ideas real, and if you’ve ever spoken to a child then you know that their ideas are spectacular. It’s never technology that holds the imaginations of children back, it’s the frustration of being told that they can’t do something by us.

“Schools should work to make their lessons as engaging as possible, with a more hands-on approach to learning, for example, with 3D printers!” Fellow winning student Nicola explained. “It is disappointing to think that there could be a young girl somewhere right now, a future physicist or engineer maybe, who could make a discovery that impacts millions of lives across the world for the better, yet will never do so because she was told ‘science is for boys’.”

We should never place limitations on the imaginations of children. We should never tell them that their ideas are impossible. Kids are not foolish, if it won’t work they will figure it out on their own. But worse than a child being told that they can’t do something is being told that something is not for them. Science is the study and advancement of knowledge of the fundamental laws of our universe. Science isn’t a boy thing, it’s everything. And it’s for everyone. And as proof, I’ll point out that most of the “boys” reading this article probably couldn’t explain how GPS works, much less turn it into a game.

Congratulations for winning the competition girls, you earned it.