The Andrew Carnegie Mansion, Just For You

The Andrew Carnegie Mansion is located at 2 East 91st Street at Fifth Avenue in Manhattan. The mansion was built with the first structural steel frame ever to appear in the United States. Now, 3D Systems has teamed up with the Cooper Hewitt Smithsonian Design Museum to produce a 3D printable model of this inspiring architectural triumph that is available to download from the Smithsonian X3D website. The model is full colour, with a full level of detailing that, as you can see below, really is awesome. The three dimensional model celebrates the fact that The Cooper Hewitt Museum, which is housed in the building, is to reopen in December.

Thanks to the ever-informative internet I can share with you that the mansion has some sixty four rooms, was built between 1899 and 1902 and alongside its innovative structural steel frame, the building was also one of the first in New York to have a residential Otis passenger elevator. The mansion was named a National Historic Landmarkin 1966.

The museum at the Andrew Carnegie Mansion has been closed for three years now, and it was during this time that the three dimensional scanning of the building took place. The scanning team used a lidar scanner to capture data from the whole of the inside, outside and even from the rooftop. Lidar scanning technology uses a remote sensing device to measure distances using reflected lasers to form a data set of nodes representing the distances. When interpolated, joined together, these points create a mesh representation of the subject scanned. The next stage is to use photographs taken of the subject matter to match against the points of the geometry to create a textured and coloured fascimilie of the original. 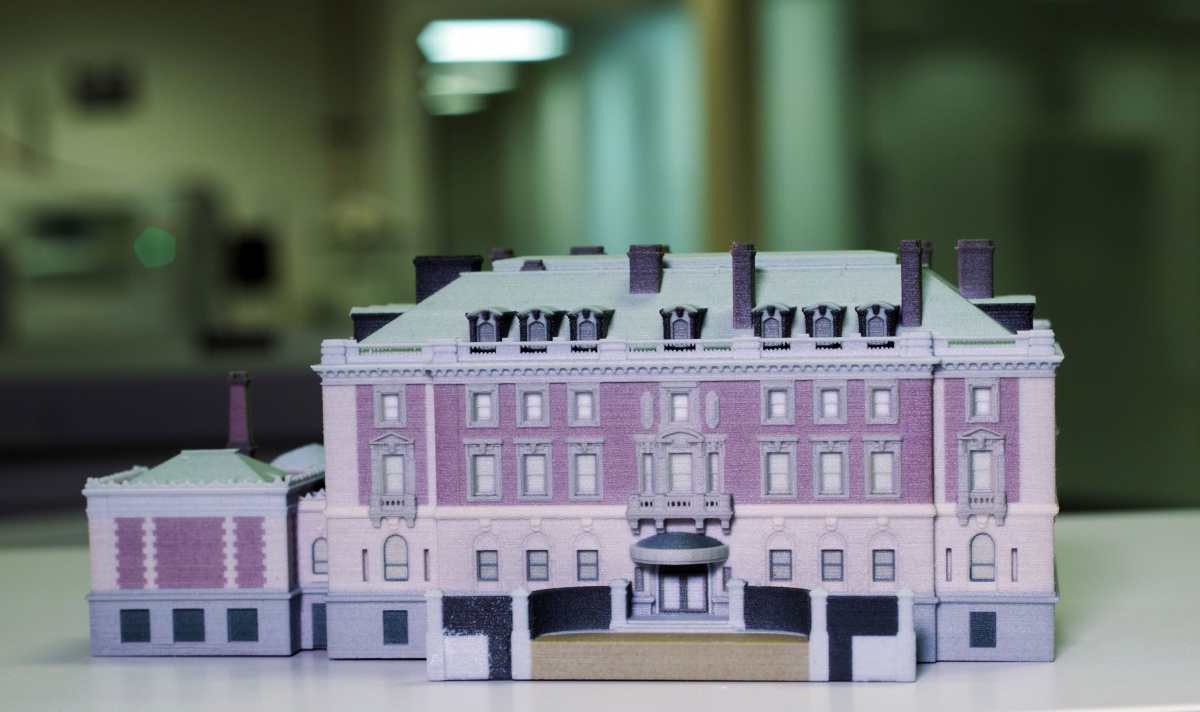 For the vibrant model of the Carnegie Mansion a team of 3D Systems artists and engineers transformed the lidar scan data into fully accurate data sets for the three dimensional visualisations and 3D printable files using Geomagic products.

The 3D printable model of this historically and culturally significant building can be downloaded under Create Commons Zero license here. This license means that users give attribution to Cooper Hewitt Smithsonian Design Museum; contribute back any modifications or improvements; not mislead others or misrepresent the datasets or its sources; be responsible; understand that they use the datasets at their own risk.