Researchers at the Houston Methodist Research Institute have potentially developed a way to 3D print living cell tissue without using unreliable inkjet style printing techniques. By applying the basic concepts behind Chinese woodblock printing, the scientists report that almost all cells survive the printing process and they are able to be printed onto any surface in almost any shape.

Recently research into bioprinting living cell tissue with electricity-gated inkjet technology has been largely successful, but typically only 50% to 80% of the cells survive the printing process. Not only does this greatly reduce the viability of any 3D printed biological objects, but it is wasteful and can often make the process unreliable and frustrating for scientists. However this new technique can produce 2D cell arrays with an almost 100% cell survival rate in as little as thirty minutes, with cell spacing at as little as five micrometers and can be applied to multiple cell types. This new technology has been named Block-Cell-Printing or BloC-Printing. 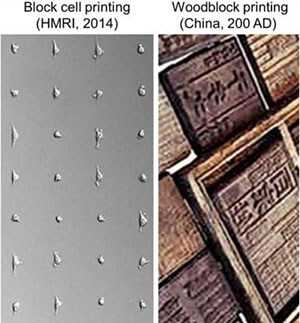 “Cell printing is used in so many different ways now — for drug development and in studies of tissue regeneration, cell function and cell-cell communication,” explained lead researcher Lidong Qin “Such things can only be done when cells are alive and active. A survival rate of 50 to 80 percent is typical as cells exit the inkjet nozzles. By comparison, we are seeing close to 100 percent of cells in BloC-Printing survive the printing process.”

By using the traits of microfluidity, the physics of fluids at microscopic levels, the BloC-Printing technique involves guiding living cells into hook-like traps in a silicone mould. Cells travel down a column in the mould, fitting themselves into any available slots eventually creating lines of perfectly viable cells that quickly adhere themselves to a growth medium. Once the mould is removed, the living cells remain and their spacing and positioning is completely customizable during the mould’s creation. Basically, picture those rubber stamps that you used as a kid. First you dip them in the ink or paint, and then stamp them onto a piece of paper. The stamp is going to be the silicon mould, the paint is the viable cell culture, and the paper is the growth medium. 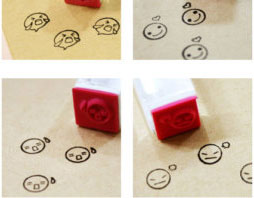 Qin’s research group is currently using BloC-Printing for the study of cancerous cells and primary neurons. Being able to print them in grids allows them to examine their growth in relation to non-cancerous cells. By identifying traits specific to cancer cells at specific stages of development they can potentially start to determine what stage of cancer the patient is in, aiding in treatment options and final diagnoses. They were also able to use the technique to print a grid of brain cells that formed synaptic and autaptic junctions.

“The cell junctions we created may be useful for future neuron signal transduction and axon regeneration studies,” Qin said. “Such work could be helpful in understanding Alzheimer’s disease and other neurodegenerative diseases.”

While BloC-Printing is not yet able to print multi-layer structures or is as quick as inkjet printing biomatter, Qin believes the technology has a lot of potential for use in drug screening, RNA interference and the study of cell and molecule interactions. There is also cost to consider, a BloC mould only costs about $1 to produce, after that all that’s needed is some living cells, a petri dish and a syringe. Compare that to the $10,000 to $200,000 price tag on an inkjet cell printer and you can see why researchers would be hopeful of a lower cost alternative.