APWorks, part of the Airbius Group, is responsible for the bike and a vast array of other 3D printed technology. It is the advanced materials and technology sector at Airbus and now it has found a stunning outside use for its Scalmalloy material.

As strong as titanium, almost

This corrosion-resistant aluminum alloy is almost as strong as titanium and comes with an even greater level of ductility. That means it’s ideal for robotics, aerospace and automotive applications. It can also be cost effective, whereas a titanium frame for a motorcycle is an expensive undertaking.

The numbers are breaktaking. The whole motorcycle weighs in at just 35kg (77lb) and the frame weighs an incredulous 6kg (13.2lb).

That’s because it is 3D printed from a fine aluminium alloy powder that has been printed to create the stunning exoskeleton. It looks like a work of art, rather than a motorcycle, and there’s an organic feel to the frame that owes a little to biological cellular structure.

That is more than a coincidence, as cellular structure is also designed for strength in a lightweight package and the curved surfaces of the Light Rider add to the overall strucutural integrity of the bike. The ‘holes’, meanwhile, allow the designers to lose weight in an area that does not contribute a great deal to the bike’s overall strength.

Manufacturers make display toys like this all the time. So what marks this one apart? It’s going into production, you can buy one of the 50 examples destined for the public road for €50,000 ($56,000) from the company’s German website:

Essentially, though, it is still a showcase for the company’s lightweight technology and advanced production techniques. A motorcycle frame creates its own unique challenges as it must be stiff, it must have torsional rigidity and yet it must also form part of the suspension and so must soak up bumps.

Designed by algorithm for a natural look

APWorks employed a unique algorithm to design the Light Rider, keeping weight to a minimum while providing a bike that is at least as strong as the competition. Considering rival bikes have a frame that weighs 30% more, that is no mean feat.

“The complex and branched hollow structure couldn’t have been produced using conventional production technologies such as milling or welding,” said Joachim Zettler, CEO of Airbus APWorks GmbH. “Advances in additive layer manufacturing have allowed us to realize the bionic design we envisioned for the motorcycle without having to make any major changes. With these technologies, the limitations facing conventional manufacturing disappear.”

The company opted for Selective Laser Melting to fuse millions of aluminium alloy particles together in layers that at are just 60 Microns thick. 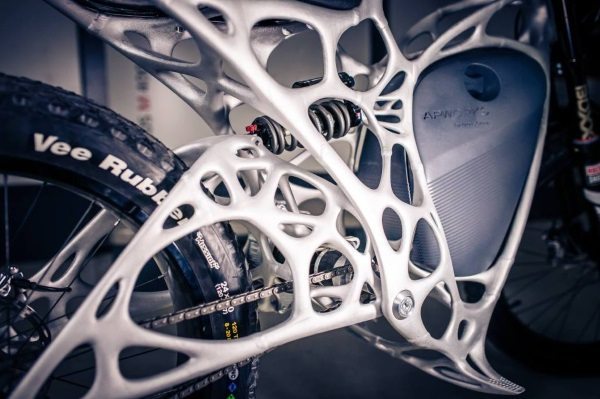 There are other benefits to 3D printed the bike, too, as cables, pipes, channels and even screw holes could be integrated into the original production process. This makes the whole process more efficient, they could manufacture the bike faster and it also should mean that there is less to go wrong.

Motorcycles often develop faults around areas of a frame that have been drilled or modified after initial build. By printing it as one unit then human error is taken out of the equation, which would certainly appeal to boutique manufacturers that need to create limited runs and can’t afford mistakes.

As for the price, it’s actually in line with other limited edition electric superbikes. Harley Davidson’s Livewire isn’t in production, but the company estimated it would cost around the $50,000 mark. There are cheaper options, including the Zero S, but then this is an exclusive design, improved performance and the limited numbers go some way towards justifying the sticker price.

However many they sell, though, the fact remains this is a stunning motorcycle, a fantastic step forward for engineering and it is all down to 3D printing.