Airbus Group and subsidiary Premium AEROTEC will display a range of products that will contribute to the future of flight at the ILA 2016 airshow in Berlin. Unsurprisingly, 3D printing will play a major part.

The international aerospace show takes place over four days and will bring industry representatives and the general public from around the world. Airbus will take the A350 XWB, A380, A320neo, A400M military plane, Eurofighter and A330 MRTT. It will also take its electric two-seater E-Fan 2.0 and the Perlan glider.

The environment comes to the fore

Those will be the show stoppers, but Airbus has some serious technology to show off to the industry, too, that reflect its focus on ‘green flight’. Through subsidiary Premium AEROTEC, it has invested heavily in material science and 3D printing.

Thor, a 3D-printed, four-metre aircraft was made from just 50 separate parts and was in the air in less than six weeks. It points to a streamlined future that saves material, time and costs and results in a lighter, more efficient plane.

Premium AEROTEC will show off a Carbon Fiber Composite production method for fuselages and structural parts that could cut a massive amount of weight out of a finished plane. It will also demonstrate more esoteric items that matter to the industry insiders, like a double-walled pope elbow 3D printed from titanium that reduces weight and complexity in a mission critical part.

Airbus is making major breakthroughs on a regular basis these days and while the general public is looking for the plane that will take them on their next holiday, the French company is slowly revolutionizing the industry with advanced materials and production methods.

The future of transport?

The exciting news is that if it works on a plane then it can work on a train, boat and car. So this could be the future of vehicle technology for all of us right here and it will be tested in the most demanding environment we have – commercial aviation.

Parts simply cannot fail on an aeroplane, so if 3D printing and the associated techniques work here then they work anywhere. As an industry we will almost certainly owe a significant debt to the likes of Airbus in the end, as they will develop, prove and validate techniques that are rough and ready right now.

A bionic partition that separate the passengers from the kitchen area is more exciting than it sounds for industry insiders, too. The design has taken cues from the natural world and that has helped the company reduce the weight of something approximating a load-bearing bulkhead by 45% with ‘bionic principles’.

Every kg saved on a plane means improved fuel efficiency, which increases profits in the long term and reduces the industry’s environmental impact. Airbus has invested heavily in 3D printing and that has enabled it to create complex shapes, test them, discard them and move on to the one that works. Without additive manufacturing, the production and testing process would be so much slower that some of these breakthroughs simply would not happen.

Airbus also unveiled an ambitious concept that is still a long way off. It’s a symphony of 3D scanning and 3D printing, where a drone will fly around the plane and check for faults. A series of robots and 3D printers will produce replacement parts in situ and then they will be fitted before the plane’s next flight. This will remove human error from the inspection process and will save lives. It also looks amazing. 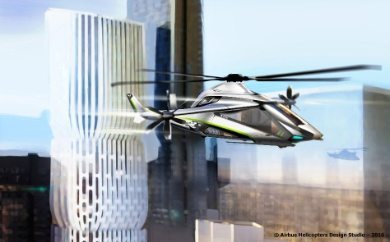 A new helicopter on the way?

The company took the chance to show off the Bluecopter. This is the helicopter of tomorrow that is a test bed for the Clean Sky initiative that the EU is backing heavily.

The company is committed to reducing fuel consumption and noise, which means a vast amount of material testing to produce the lightest, most efficient helicopter possible. Again, 3D printing holds the key to this extensive test schedule and the H145 German police helicopters and armed forces helicopters will undergo constant revisions in the years ahead.

So Airbus has something for everybody right now, including technology buffs with a penchant for 3D printing. We’re just glad to have them on board.