The Afinia 3D Printer-Enhanced Educators: Stories of Success eBook has ten great stories of Afinia 3D printers being brought into educational environments with wonderful results. The stories include 3D printed insects created entirely by kids, the transformation of a community rec center into a community tech center, and the struggles to bring 3D printing into high schools and middle schools. 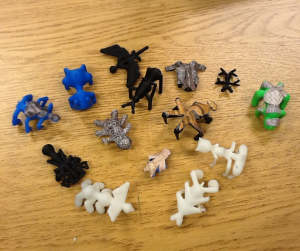 The first story is about Clark Barnett, his 4th grade class and their 3D printed bugs. I’ve written about Barnett’s 3D printed insect lessons previously, and it remains one of my favourite stories. It is such a perfect example of how 3D printers can enhance education, even in unrelated subjects. This is one of the larger problems with many of the 3D printing education curriculums being developed, they tend to focus specifically on engineering and 3D printing. Barnett’s lesson is on entomology and for him 3D printing is simply a tool to get his kids interested.

Of course classrooms aren’t the only place where 3D printing can help students learn, many makerspaces and hackspaces are becoming the modern day community center. When Baltimore educator Andrew Coy learned that a local city run recreational center was closing due to financial constraints on the school district he saw an opportunity. By working with other like-minded educators and a few local charitable organisations he was able to turn an old rec center into the new Digital Harbor Tech Center. The new community maker space provides much needed high tech education for students in grades 1-12. All of their offerings are “pay-what-you-can” and provide after school programs and community groups in a physical space dedicated to helping kids develop real world tech-skills. 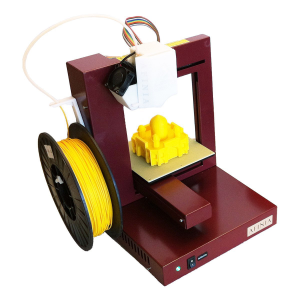 Community maker spaces and after school clubs are often places where technology minded teachers can introduce 3D printing to students because many schools are still resistant to the technology. However it is becoming easier, and often all it requires is a teacher or a parent who is passionate about 3D printing. To that end Dr. Chris Williams, director of the Virginia Tech DREAMSLab started an outreach program for k-12 STEM teachers that includes a week long training session at the National Science Foundation. At the end of the session the participating teacher is provided with an Afinia 3D printer for their classroom that can be introduced to their students. 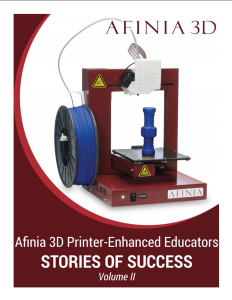 Of course the great commonality of all of these stories isn’t just the fact that they are about educators, it is the fact that most of these teachers purchased or were given Afinia 3D printers for their lessons. Like a lot of the larger 3D printer manufacturers, Afinia is trying hard to get their hardware into schools, but unlike several of their competitors who simply create a school bundle and a simple curriculum and call it a day, Afinia is letting it happen organically. By focusing on the stories of their customers who are educators they are providing real, tangible success stories that can inspire and influence teachers who are new to 3D printing.

The one thing that most educators can agree on is the fact that the United States current educational system isn’t doing enough to address the need for high-tech education. Each of the ten stories in Afinia’s ebook are inspiring all on their own, but as a collection it’s easy to see not only how much work has been done but also how much work still needs to be done. All it takes is a good teacher, and despite what the talking heads on Fox News say we clearly have a lot of those.