A Quick(ish) Overview of My Day at the 3D Printshow

Well I am struggling to know where to begin to write up my day at the 3D Printshow at the Brewery in London yesterday! As I travelled home on the train, I wrote copious notes about what I had seen, the conversations that I had and the ideas and inspiration that they provided me with.

There is no way I can fit it all into a single post, well, not without sending readers to sleep, so here I will provide an overview — I’ll try to cram as much in as I can, but with dedicated posts, interviews and articles to follow in the coming days.

Taking place over three days, the first day of the 3D Printshow was trade and press day with the doors opening at 1pm. Whether from lack of sleep, over-excitement or stupidity, I wasn’t aware of this when I booked my train – the earliest one I could. So I got to London with a few hours to pass. I spent this time in the company of Jason Lopes of Legacy Effects, LA, CA, USA. Jason’s work with 3D printing is about as high-profile as you can get. Working with some of the most famous people on the planet — Gwyneth Paltrow, Kristen Stewart, Robert Downey Jr to name a few, is all in a day’s work for Jason, but a more grounded, say-it-straight, passionate advocate of 3D printing you will struggle to meet. Relaxed and over coffee I had the most amazing insight into Jason’s work, the new things that 3D printing, in his hands, makes possible for Hollywood and where it fits in with some other amazing technologies — not least 3D scanning.

Anyway, Jason is over as a guest speaker and VIP at the show and had a wrist band that permitted access to all areas of the show from 6am. Feeling a little like a naughty schoolgirl he sneaked me past some surly security men, allowing me to get some extra time with the exhibitors, the 3D printers and the models. Basically I saw a little more chaos than I was supposed to but, been there, done that — with the time and effort that has gone into this show it was always going to come together, and it did.

Said hi to the peeps from Objet, caught up with Assa Ashuach and Sia Mahdavi of Digital Forming who have some really interesting stuff going on. Unfortunately, Lisa Harouni was not able to make it. One particular highlight was seeing the new Form 1 3D printer — it’ll fit on any desk and looks pretty funky. As I handled a couple of the grey parts they looked and felt a little fragile, so I asked the question — standard with SLA. They were obviously ready for this and pulled out a slightly broken, yellow resin chess piece from back in the day. Clever. With that and a part from the £2k Form 1 in your hands at the same time, it is a stark reminder of just how far this tech has come! The grey material will probably be the only material available at commercial launch in February, but they are working on others. I asked if they would be able to fulfil all the kickstarter pledges and if they were having to scale up production — yes and yes. Also, turns out Jason has ordered three of them. Nice endorsement!

Caught up with A1 Technologies, Denford, Silvia Wiedenback who presented at TCT and was showcasing her jewellery as part of a collaboration with Tobias Klein — just stunning! This show opened my eyes to the many, many talented artists and designers that have embraced 3D printing and use it in their creative process. Some beautiful, unusual, weird and some downright freaky 3D printed work on display. 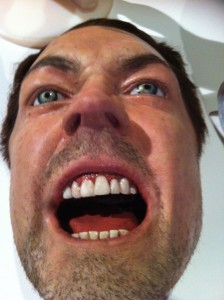 Quite by chance I started talking to another visitor at the show, who asked me why I was there. A brief explanation later and he’d whipped out his ipad and was showing me some of the incredible work he is doing in Belgium in collaboration with Melotte. Frederik de Wilde is building 3D printed structures and then growing carbon nanotubes on them. These 3D structures are so black that they look 2-dimensional. Odd to see, but it excited me as another pointer to the future.

More drop by’s to the stands of Laser Lines, Digits to Widgets, Richard Hague of Nottingham Uni, Phil Reeves of Econolyst, Sculpteo, Envisiontec, Ogle and Connor MacCormack of Mcor, whose stand was not quite as colourful as usual with the absence of Mrs MacCormack (you were missed Deirdre).

It was great to bump into Andrew Dent of Faberdasher, who reported a super-busy and manic year. As a supplier of 3D printing consumables and accessories, this is hardly surprising and definitely well deserved. Some exciting things happening there. I also ran into Alice Taylor of Makielab, and then later Jo Roach. The Makies were there in force and welcome they were too. I also caught up with Mark Bloomfield and then Caroline Reid from the Science Museum, which will be holding a 3D printing exhibition in London next year. Another trip down to the capital to go in the diary! 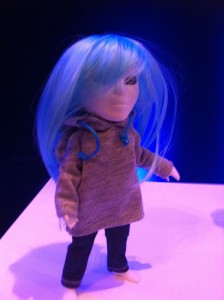 One of the best stands for pure motivation and where this tech can make a real difference was Printcraft — 3D printing with Minecraft. I told my eight year old son about it this morning — he hasn’t shup up about it since!!

I met Sam Bernier, who, as of this week, will be working with Bertier Luyt at Le Fab Shop in France. His 3D printed project was on display exhibiting some obvious talent here and I am looking forward to hearing more of the adventures in France.

I attended the 3DP CEO Seminar, which kicked off around 2pm. This was an odd one and didn’t really work IMO — half the people that were on the “CEO” panel weren’t actually CEO’s and there were at least three CEO’s at the show that I know of that weren’t on the panel. I couldn’t help wondering who wasn’t asked and who said no! It all got rather uncomfortable when I asked around — political I think, and not a little messy as these things tend to be, despite good intentions.

I did, finally, get some face time with Bre Pettis, CEO of Makerbot who was doing a fantastic PR job with the new Replicator 2. As well as being a delight, it was a pretty surreal moment for me, because he seemed as excited to meet me as I was to meet him. Full interview to follow.

I also had a meeting scheduled with Abe Reichental, CEO of 3D Systems. Like Makerbot, 3D Systems had their own room at the venue and it was crammed with the full range of content-to-print solutions, including 20 or so Cube 3D printers doing their thing. I have to admit to being quite impressed with the range and scope of it all, and actually seeing it all in one place in a relaxed and contemporary setting, which is what the 3D Print Show offers, it was an eye-opener. As Abe finished up a slick interview on camera, I introduced myself and we exchanged views and ideas. He was extremely gracious and we talked consumers, timing, colouring book simplicity, apps, press coverage and the future before he was gently reminded by a 3DS team member that he was due for another interview. Again, full interview to follow.

I had a complete an utter eye-opener when it comes to EOS — the German suppliers of high-end laser sintering (LS). That’s for another time, suffice to say, of all the 3D printed parts on show, LS was the dominant process.

My favourite exhibit of the day was Fashion Digital Studio. I met Peter Hill and we were talking shoes and the customisation value of 3D printing — love this, and I jokingly asked when he would be scanning heads and producing hats. He answered me seriously: “Oh, that will be next year.” Excited much??

The cb-printer is a new one. Came out a couple of months ago and I have to confess it was not on my radar until this event. It looks familiar but has plenty different about it too. The founder, Bartosz Cieluch, is utterly convinced it will be the best and most widely used affordable 3D printer. He has some stiff competition, but we’ll see.

As shows go in this industry, the 3D Printshow had something special — a real buzz and excitement around every exhibit and every part induced by an inspired contemporary venue and location (exhibitor logistics aside), it being the inaugural year and some excellent pre-event organisation and marketing with some very nice details.

I had a fantastic day, was gutted to miss the live event (looking forward to the video footage) and I hope that the two consumer days over the weekend will generate as much interest and excitement around the reality of this fantastic technology.