ProDesk3D UPDATE: Head Turning Has Worked, But Does the 3D Printer?

UPDATE: So that vibe I was talking about — seems it could well be a mixuture of wishful thinking and what’s currently missing from entry level 3D printers. That saying, ‘if it sounds too good to be true it probably is’ now seems to apply.

Joris Peels “called Shenanigans” on this printer on Twitter last night. “I’d love for this to be true but it doesn’t feel right.” Joseph Flaherty seemed to be in full agreement. As was Kevin Quigley who promised to run naked through the streets of Shrewsbury if this was the genuine deal and launched in June.

Others, including @RichRap3D, @rhysoj and @Dizingof were also sceptical, with a hint of optimism that this would be fantastic IF it was real.

The lack of a video of a beta machine working and pictures of any 3D printed parts is not helping botObjects’.

I’m hoping they are just over-ambitious in their introduction and not out and out rogues, but I urge them to respond to this with some answers.

botObjects has been around on Twitter for a while now (@botObjects) with a profile saying: “We are launching the world’s first Full Colour Desktop 3D Printer – stay tuned for more updates.” Well, it’s time the guys at botObjects, based in NYC (New York seems to be emerging as the hub for 3D Printing), updated their profile because they have just gone live with the site and more in-depth information about the ProDesk3D — a state-of-the-art desktop 3D printer that produces full colour models.

There have been many (oh, so many) new 3D printer launches this year already, and it is sometimes hard to get excited about the later ones. However, this one is definitely one to sit up and take notice of, I think. It has a completely different vibe about it and has a couple of USPs that really set it apart.

First up, the colour options: the ProDesk3D uses a proprietary 5-colour PLA cartridge system, which is capable of mixing primary printing colours to generate the colours of choice for the object you wish to print.

The ProDesk3D is also offering improved accuracy with printed support material, delivered via a PVA-based Support Material courtesy of a proprietary dual-extruder head.

Another brow-raiser is the claim of fast automatic set-up, with a self-calibrating build platform. The team states that it is true plug-n-play without any complexity in set up — plug it in, click on automatic software download, insert cartridges, load a 3D design and print it!  The auto software is the key here. botObjects is also a software development company and has worked specifically on providing powerful, yet simple to use, non-technical – 3D printing software.

Anyone else really liking the sound of this?

In terms of output, the ProDesk3D is said to be capable of printing down to 25 microns, at “industry leading speeds” with PLA and PVA support material. And a cutting edge tri-fan system is an added feature that has been incorporated to ensure consistency of airflow within the enclosed casing, which in turn facilitates consistent printed results. 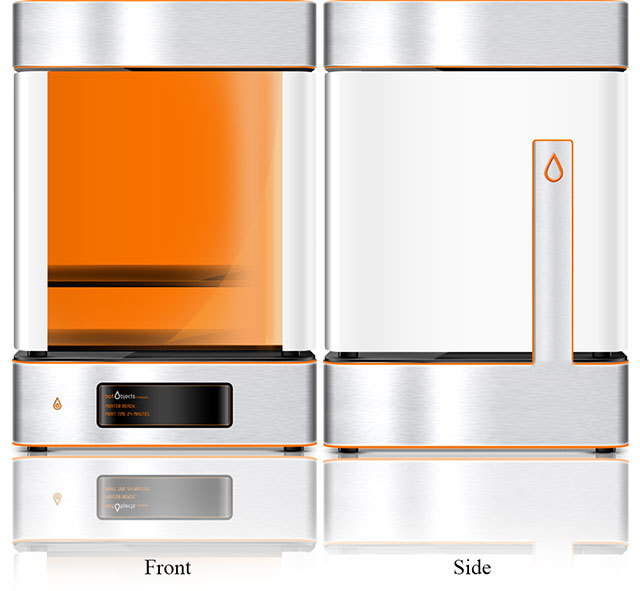 The aesthetic is pretty good too, albeit familiar, and in the absence of any pricing material for the ProDesk3D, which should be commercially available this summer, it looks set to compete in the prosumer space (think Rep 2/Form 1).

The goal of the team behind the ProDesk3D is commendable and I look forward to seeing a machine later this year to see if it meets their own standards, stated as: “We wanted to demystify the process of 3D printing, while keeping the technical jargon under the hood – enabling everyone to load designs and get them printed easily with just a few clicks. The ProDesk3D ProModel software does just this.”