The biggest week of the year for New York City fashion is here yet again and already we are seeing the influence that 3D printing is exerting on the runway. Yesterday, we took a look at the nano enhanced and geometrically savvy 3D printed dresses created in collaboration between threeASFOUR and Travis Fitch, and, now, NYC-based fashion designer Alexis Walsh is also showing us what 3D printing technology can do for the fashion industry. Walsh put both her LYSIS Collection and The Spire Dress on display for NYFW, both of which use 3D printing to produce unique shapes and form.

“I learned about 3D printing in one of my industrial product design courses, experimented with it on a whim, and it’s now my favorite method of creating fashion design,” Walsh said. “You’ll never know how much you enjoy something until you just go for it.”

Her designs were showcased at the Oxford Fashion Studio Autumn/Winter 2016 NYFW runway show and, in fact, her 3D printed Spire Dress was the final piece shown that night. The Spire Dress, which Walsh designed in collaboration with fellow designer Ross Leonardy, is made up of over 400 individual tiles, all of which were 3D printed in SLS by Shapeways. The tiles were then hand-assembled using tiny metal ring connectors. The Spire Dress is a geometric journey that spirals around the model’s body, and was ultimately inspired by the points of cathedral spires. The shape of the dress was designed through a set of algorithms using Grasshopper, and, before being manufactured by Shapeways, was printed and prototyped by Walsh with a MakerBot printer. 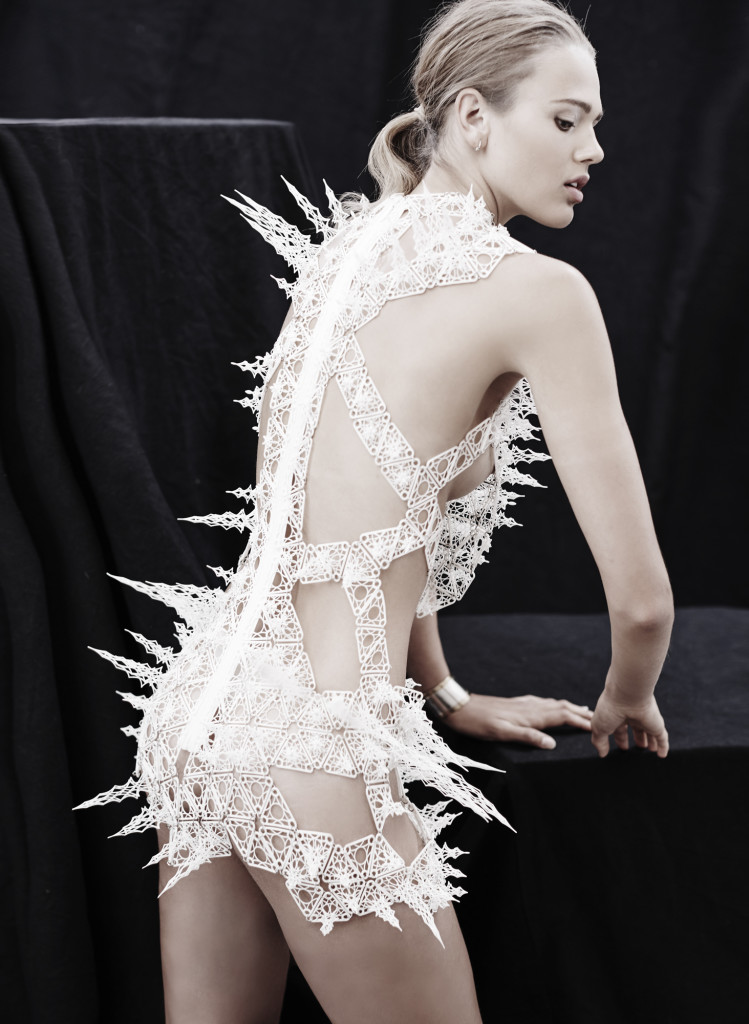 Walsh also put her LYSIS Collection on display at NYFW, a tasteful mixture of traditional fashion techniques and the newly implemented 3D printing technology. The LYSIS Collection includes a variety of 3D printed pieces that complement the rest of the outfit, producing unique structures that are sewn onto the garments by hand. As a whole, the collection is meant to “mimic the growth of viral structures while blending organic shapes with rigid silhouettes”. The 3D printed pieces were designed in Rhino and printed by Shapeways in their white nylon, each of which were sanded, dyed, and finished by hand. This particular collection actually helped Walsh win the first ever Shapeways Education Grant, and was actually first showcased at the NYC-based 3D Printshow back in April 2015.

It is evident that 3D printing technology has become a major tool for fashion designers such as Walsh, allowing for almost any kind of geometric intricacies you could imagine. If you’re local to NYC and haven’t gotten a chance to see Walsh’s 3D printed fashion collections, you can check them out on February 23rd at the Internet of Fashion Expo during New York Market Week. As for future endeavors, Walsh is reportedly continuing her working with Leonardy to design a 3D printed jewelry collection and a full 3D printed fashion line, showing no signs of backing off from the emergence of 3D printing technology!