One of the keys to a more efficient, accurate, and standardized industrial additive manufacturing is software that can optimize the complexities of precisely fusing together atomized (often reactive) metal powders in order to create solid metal components. 3DSIM, a software company dedicated exclusively to the development of such simulation software, is now accepting partners for the beta testing phase of its first exaSIM software tool to do exactly this.

exaSIM has been publicized by 3DSIM as a software capable of saving billions of years in simulation calculations. While that assertion is based on purely mathematical data, the fact remains that the software is the result of more than 5 years of research & development by some of the world’s leading researchers in AM and is also an extension of the intellectual property licensed from the University of Louisville. 3DSIM’s software is built to predict solidified microstructure and the resultant properties by modeling the underlying physical behaviors that are closely linked to process parameters, such as beam diameter, beam intensity, scan strategy and part orientation.

This exaSIM Support Optimization Tool is designed to be the first of several exaSIM-branded tools designed for the people responsible for choosing machine settings, part orientations, and support strategies to help ensure a part is built successfully. The opening of the beta testing phase is a huge milestone for the company, as it comes only when a tool hits a Minimum Viable Product (MVP) level. The beta program ends when the tool has been validated and a full commercial license becomes available.

Those who join the program can be the first to take advantage of 3DSIMS’s highly advanced simulation capabilities and are asked in return to provide detailed feedback and interact with a growing community of users. Companies applying should be open to shared risk policies and collaborative interactions. By becoming a Beta Partner, they will also be among the first to hear about future capabilities and have the opportunity to adopt them as they become available. 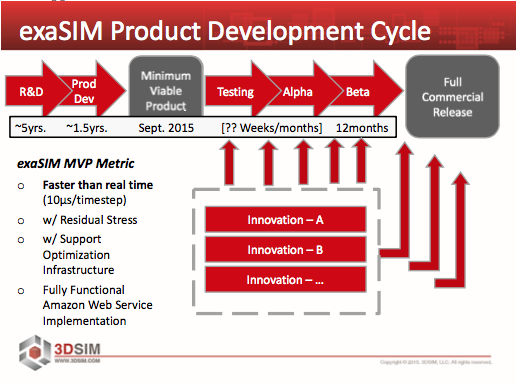 The price for accessing this beta program can also be used again for future products, including the new FLEX software, which is being developed to predict the physics and material transformations in metal laser sintering (details on beta testing will be released in November).

Future exaSIM tools will include many features that can greatly affect metal AM capabilities, such as the ability to predict part distortion and compensate a CAD file before a part is built, so that the part distorts to the correct geometry after removal from supports. Another attractive feature is multiple platform support, including the ability to compensate for machine to machine variation. Future tools will work on the ability to change process parameters to account for differences between powder lots and virtual product visualizations (surface roughness, porosity, warping).