Since the launch of the 3Doodler and the host of other “3D printing” pens that have followed, there has been much discussion about if and how these tools fit into the 3D printing industry landscape. The general consensus seems to be they do — and they are here to stay. Another debate centres around the argument of 3D digital manufacturing technologies in art and whether the ability to replicate a 3D model an infinite number of times prevents said piece of work from being unique; and that uniqueness is a requirement for something to have an intrinsic artistic value. 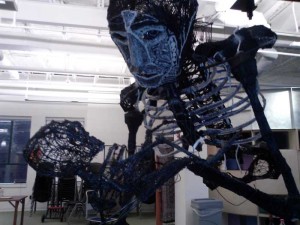 With the 3Doodler that proposition is no longer valid, as the plastic extruding pen allows users to “3D Draw” rather than print, which means that no two creations are alike. A subsequent argument can then be presented, in that the works created with the 3Doodler are not ‘beautiful’ or complex enough, as the pen is quite difficult to control and use.

Justin Mattarocchia, a 3D designer and creator of animatronic pieces, now silences both sides. He is creating amazing 3D sculptures and animatronic robots with a 3Doodler. The most impressive, which was featured recently on the 3Doodler official blog, is his Plastic Man, an incredibly complex and intricate life-size sculpture of a man’s skeleton holding a baby skeleton, which will gradually evolve into a full animatronic being.

The 3D drawn piece is definitely unique, not just because it cannot be replicated from a digital model but because no one else can possibly create something as complex and intricate as this masterpiece which, by the way, sells on Etsy for €75,508. It is a hand made sculpture in ABS plastic which includes electronics, EL wire and nylon cord parts.

Mattarocchia reveals that his creative process begins by looking around the house for objects, imagining what shapes could be used as components for his projects. For instance Plastic Man’s spinal cord was created using a cardboard tube as a foundation and removing it gradually as the “discs” were formed. 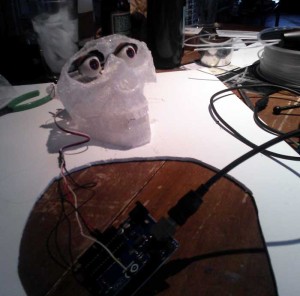 The most impressive feature, that which makes his creation more unique (and even “emotional”), is arguably the face. He says that he wanted to work on it more free hand and he did so by implementing a “polygonal” approach: since the curved features can be difficult to shape in mid air (as anyone who has ever used a 3Doodler is fully aware of) he drew triangular shapes off his initial trace and continued to build off them until the particular face feature was formed.

The result is even more impressive when Mattarocchia “breathes life” into it by connecting the robot’s face to the electronic systems that move it and gives it speech. Most of us thought visual effects had definitely replaced animatronics in movies and that the death in 2012 of Carlo Rambaldi, the Oscar winning creator of ET, Alien and King Kong, had marked the end of an era. Instead, 3D printing is bringing “physical effects” back with a vengeance and real life animatronics is the next logical step. Artists like Mattarocchia, usually, lead the way.