Messing up royally is meant to teach us a lesson about how to achieve success during subsequent trials.  If it’s embarrassing, devastating, even painful, we will remember, in our minds and muscles, to avoid making such a mistake in the future.  That seems to be at the heart of the Flickr group The Art of 3D Print Failure.

Spawned as a result of a blogpost from RichRap about 3D printer mistakes, the Art of 3D Print Failure is a place where 3D printer users can go to post their prints gone wrong and machines gone haywire. It is filled with pictures of plastic strewn everywhere, misaligned print layers, objects extruded off the sides of print platforms, and ketone tape melted by malfunctioning heatbeds.  As the project’s about page states, “this group is meant as a show and tell of the prints that went wrong.  Add a description of what happened and your thoughts and analysis and hopefully others will comment on how best to avoid the problems in the future.” 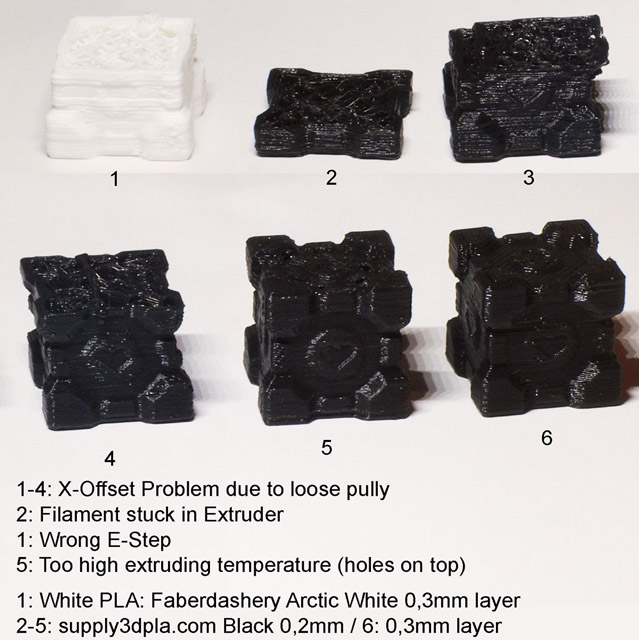 In the spirit of Open Source, the page helps users mutually grow towards becoming successful 3D printer users.  But as you glance over the many, many pictures from the group’s 272 members, the page becomes about something else. The humorous and sometimes beautiful failed prints become so interesting that they almost encourage failure, or at least embrace failure as a form of exploration.

In June, 3DPI’s Nancy Fumero wrote about the aesthetics of failure as it relates to 3D printing.  She, in fact, mentioned the Flickr group in that post, as a sort of alternative to the traditional aesthetics of 3D printed art that she had grown tired of, saying:

I appreciated this work because it made me wonder, why, when 3D printing technology is getting better and better, the aesthetic promise of clean lines and perfect execution seems less compelling?  I postulated that it was a disinterest in the object as art.  It seemed to me there are so many things one can pay mind to in a work of art other than its completion and public display. The aesthetic boredom I was experiencing looking at 3D printed art objects was that they were mini monoliths, somehow inherently incredible because of their novelty, but their spark was otherwise prone to immediate burn out. I imagined that if there were a group show on 3D printed art, the commonality between artists would be the medium rather than a more telling affinity.

I guess I hope 3D printed art to be capable of framing genuine political concerns, with some modicum of subtlety, so that the technology could never be the only draw-in, the gimmick, the art itself, but rather, a mode of directing attention to deeper questions and values.

Polished art, without a deeper symbolic purpose, is boring and just because it’s 3D-printed doesn’t make it inherently interesting.  On the other hand, by enshrining failure and removing the merit from traditional notions of “success”, the Flickr group does have the ability to subtly frame political concerns (not that it’s intentionally doing so).  This is because failure is a political act, as Nancy alludes to and as Jack Halberstam lectures when discussing his book The Queer Art of Failure[1]:

Capitalism has promised you that you will always win no matter what the market is doing. Buy a house; it will increase in value. Put money into the stock market; it will rise in value. Buy a lottery ticket; you’ll win. But remember that for there to be winners in capitalism, there have to be losers. We know that the winners are very few and they’re winning huge amounts and, therefore, everyone else is losing huge amounts. Learning to lose means actually being okay with losing and recognizing that winning is already such a compromise, such a corrupt project that we, anyway, should not be engaged in it.

The Art of 3D Print Failure, then, can be seen as a place for people to be okay with losing.

Failure certainly serves to teach an organism to learn from mistakes, in order to steer clear of unwanted consequences.  And, at this point in human history, maybe the failures of the collective, of society, are teaching us to learn from our group mistakes and, instead, to embrace the so-called blunders in life as challenges to perfection, false notions of heaven, happiness, and monetary bliss.  Maybe our mistake as a collective is the failure to welcome imperfection as a necessary part of life and, as we recognize that, we will learn to truly succeed as a species.  We will no longer reach for material wealth, fame, and power and we’ll erase the illusory borders between social groups.  And, when we learn that there is no ideal state, we’ll learn to take care of all of the members of our society and we’ll learn to enfranchise the disenfranchised.  We’ll all start to say, in the words of Eugene V. Debs[2], “While there is a lower class, I am in it; and while there is a criminal element, I am of it; and while there is a soul in prison, I am not free.”

There is, of course, much more to say on the virtues of losing.  As you look through a gallery of images from the Flickr group’s island of misfit prints, it might be worth wondering what lessons might really be learned from failure.

[1] The word “queer” in the title of the book refers to the heteronormative aspect of capitalism that divides sexuality/gender into “winners” and “losers”, privileging things like heterosexuality and, as a result, confining homosexuality to a lesser status.

[2] Labor activist and US presidential candidate during the Industrial Revolution and one of Kurt Vonnegut’s favorite people.