Lately, I’ve been thinking about what constitutes progress within the field of 3D printing. The thought was sparked after Google searching the phrase “3D printed art” and finding that despite being interested in the huge implications 3D printing poses at large, politically, commercially, and socially, I wasn’t so much interested in how 3D printing was faring aesthetically.

Naturally, there were a lot of results from the image search. After sifting through dozens of pictures of 3D printed fashions, geometries and miscellany, the first thing to genuinely catch my attention was a photo of Shane Hope’s 3D printed collages, which at first glance were strangely undecipherable. Unlike the other pictures I had looked at, his was a zoomed in image that covered the entire expanse of the frame and yet presented no centralized object. What was intriguing was that the pastel-colored collages were not restricted by the dimensions of the printer. They grew outside the parameters of typical 3D printed materials. 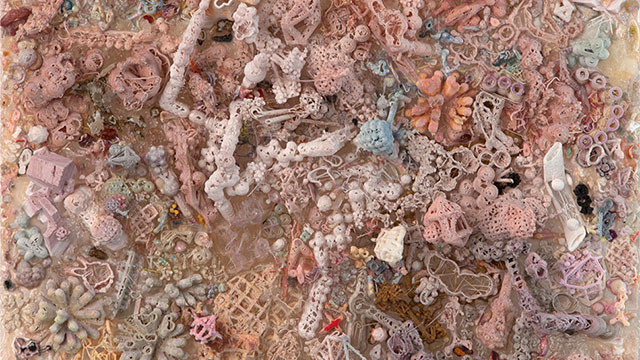 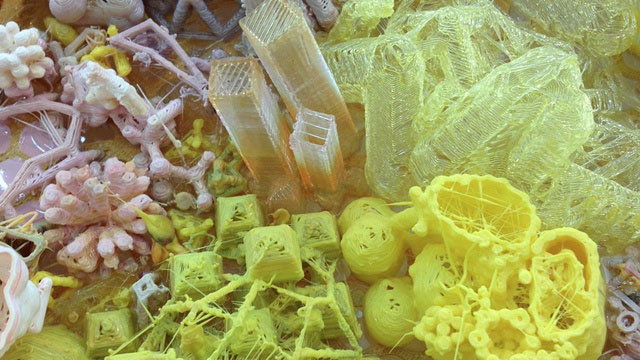 Looking like a cross between coral reefs and the San Luis Obispo gum alley, Hope’s collages, which he calls nanofactures, feel like something that is still in its drafting stage. The sort of smoothness and finesse that seems to make a good 3D print does not necessarily generate the same wonder as something that looks like it began to melt under the sun. There are deflated and warbled shapes with open tops that you can peer into to find the stringy threads of filament, so that its flaws are encountered assets, revealing the structure of its construction.

I appreciated this work because it made me wonder, why, when 3D printing technology is getting better and better, the aesthetic promise of clean lines and perfect execution seems less compelling?  I postulated that it was a disinterest in the object as art.  It seemed to me there are so many things one can pay mind to in a work of art other than its completion and public display. The aesthetic boredom I was experiencing looking at 3D printed art objects was that they were mini monoliths, somehow inherently incredible because of their novelty, but their spark was otherwise prone to immediate burn out. I imagined that if there were a group show on 3D printed art, the commonality between artists would be the medium rather than a more telling affinity.

I guess I hope 3D printed art to be capable of framing genuine political concerns, with some modicum of subtlety, so that the technology could never be the only draw-in, the gimmick, the art itself, but rather, a mode of directing attention to deeper questions and values.

One of those questions might be on aesthetics and what generates them. There is a flickr group dedicated to 3D print fails that is incredibly interesting and worth checking out. What’s exciting about failed 3D printed objects, like Hope’s nanofactures, is that glaring errors act as indices of authorless intervention. And those nameless elements that create errors are often the physical components of the technology itself that speak of wear, incompatibilities, and misidentification. It is like saying there is a sort of life within technology’s ability to deteriorate. 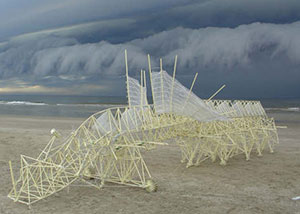 This implication of non-cognitive intelligence may be a thought best ruminated over Theo Jansen’s marvelous kinetic sculptures. I can think of no better example of a co-creative expression between artist and technology than Jansen’s Strandbeest. His enormous mechanical creatures move alongside ocean shores and across open fields powered by the rush of wind. And recently, with an Instructables page detailing how to make your own 3D printed Strandbeest, they skitter along tabletops and bookcases as well.

In interviews, Jansen speaks of his kinetic sculptures as though they were using him and 3D printing as vehicles for replication. In Jansen’s view, he is the tool with its attention gripped and abilities at use. This idea he describes can probably be explained through the neurochemistry of obsession, or through some elaboration on mimesis, but those ideas are not as interesting as the possibility of autonomous art that creates itself through influence and enchantment.

I am very fond of failure in various art forms. I also appreciate mastery and exactitude.  But I find there is a sort of beauty that permeates an object that was created outside of human intentionality.  It might be a relief to depart from the register of our favored aesthetics and find things can proliferate, reconstruct, to form something as unexpected as a tribe or a cosmos.