A collaboration between industrial researchers at Warwick University and the West Midlands Police using 3D scanning, printing and virtual reality has provided crucial evidence to a murder conviction for the first time.

Lorenzo Simon was sentenced to life in prison last month for the barbaric murder of a housemate, whose body he dissected and stuffed inside suitcases he later hurled into Birmingham Canal, with help from his girlfriend Michelle Bird. The use of 3D scanning was instrumental in the conviction of Simon.

Detectives managed to recover part of the victim’s humerus from an oil drum (which was used as a furnace to destroy evidence). Experts from the University of Warwick then used 3D scanning techniques to prove the part fit seamlessly with a limb discovered in the case.

WMG (University of Warwick) researchers usually work with partners in the automotive and aerospace industries, using 3D scanning and printing to pinpoint material faults. Working with the West Midlands Police, they repeatedly x-rayed nine pieces of bone at a range of angles, using the thousands of images to create 3D ultra scans.

They were then displayed on a virtual reality 3D video wall, allowing detectives, police forensic experts and crown prosecutors to examine the digital images in remarkable depth. 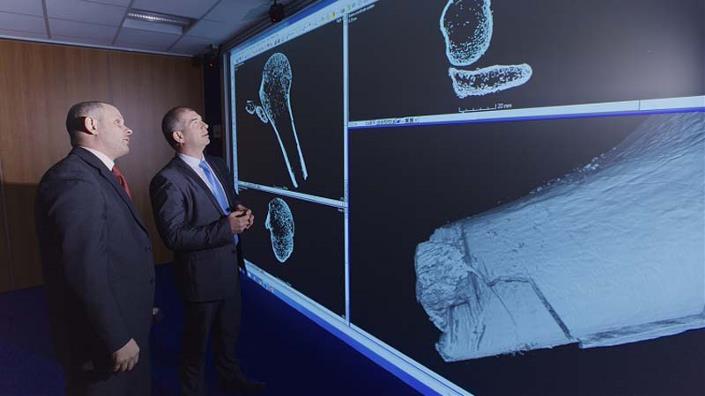 Professor Mark Williams, head of product evaluation technologies at WMG, said: “A black lump resembling a large piece of coal was found in the oil drum and our scans revealed it contained the top part of the victim’s humerus, fused inside a mass of molten debris.

“The bone had been sawn and snapped. After scanning body parts in the cases we found it was a perfect jigsaw fit to another piece of bone and could show in minute detail – down to one 17,000th of a millimetre or half a hair’s breadth – the cuts on the bones.

“That helped officers match the serrated edge of the saw to many of the indents and showed they’d been inflicted with a blade width of 1.4mm. And we made exact 3D print replicas of the bone to demonstrate the evidence to the jury.

The partnership between the University and Police has being utilised in four cases so far, with three of them being murder trials.

Detective Superintendent Mark Payne from West Midlands is leading the Warwick collaboration. He said: “It’s a fantastic development in the field of forensics and, as we’ve proved in the few cases to date, can be crucial in helping us uncover the truth behind some of our most serious crimes.”

This collaboration only marks the beginning of the technology being used to fight crime. The 3D scanning technology is being used to help solve cold cases in the US as well as potentially transporting juries to a virtual crime scene in the UK.