We, The 3D Printed Twins of Berkeley

You may have noticed that we have covered quite a few “mini-me stores” or, as Intel likes to call them, physical photography shops, which is testament to the growing number of stores built on this business model that are popping up in the UK, Holland, Mexico, Austria, Japan, Thailand and the US. However, many of these people can be considered forward thinking innovators who have been planning their new venture for a while — before most people had even heard about 3D printing.

One of the main difficulties they have to face is that the toughest part of offering physical 3D photographs of people lies in the 3d scanning process and in the 3D modelling of the digital file to make it 3D printable. These difficulties can be overcome by investing in very expensive software and hardware (but then the business plan has to be adjusted for higher sales and higher numbers) or by practicing and refining one’s ability to use a 3D scanner and 3D scanning software.

David Pastewka, Will Drevno and Richard Berwick from Twindom chose the latter. First they approached commercial 3D printing by inventing a 3D printing vending machine, the Dreammachine, for students at UC Berkeley. Then they spent a year scanning and printing folks in downtown Berkeley to get better at it. Finally they opened up a shop to offer their cloning services. All customers need to do is take a trip to their shop and get 3D scanned, then wait and receive the miniature by mail in about two weeks. 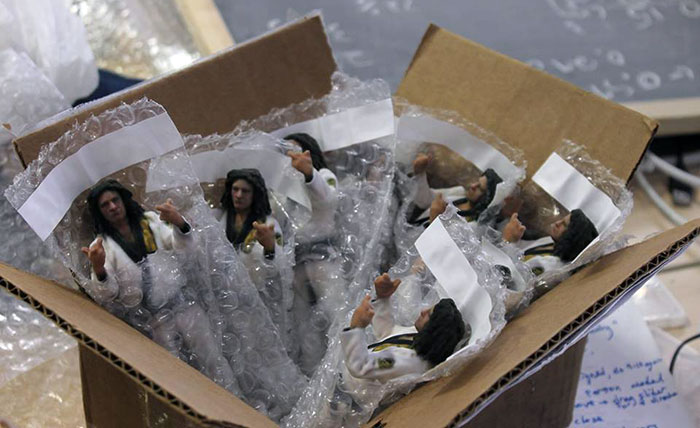 Twindom is shaping up to be a real 3D Photo shop. It offers special services for bespoke cake toppers at weddings while the range of people it has already cloned surpasses that of most other shop seen so far: groups of friends, families with children, grandparents, cops. Not just standing straight either but in as many different poses.

The only limitations are the scanners’ difficulties in capturing shiny and transparent/translucent objects (and the fact that the chalk-bases CJP miniatures are not waterproof). Models seem fairly priced. If you are not too much of a megalomaniac you can get a 1:25 miniature for as low as $39 (or $59 for two people in the same scan), while the X-Tall size, scale 1:12 will run $119.

Unfortunately that does not include the trip to the West Coast but the team is already planning on expansion. New 3D scanning systems, such as the Fuel 3D and 3D Systems’s 3DMe Photo Booth are coming out that will make high quality 3D scanning faster and more affordable: who knows where Twindom’s twin will pop up next.