One of the founding principles of the RepRap phenomenon was, and still is, ‘self replicating machines’ and for many 3D printing enthusiasts the ultimate question is when will a 3D printer emerge that can completely replicate itself? We are certainly not there yet in practical terms, however the notion is continually evolving. Many parts on a RepRap 3D printer can be 3D printed — and even some of the top-end system manufacturers use their own technology for parts, I know Stratasys has in the past. Many makers and 3D printing enthusiasts do develop improvements for their own 3D printer using their own 3D printer. One such example has been shared by STEMulate Learning, who made a 3D printed Replicator bed level jig — a part that you can print for your own MakerBot Replicator too.

This part is used for levelling the bed of the Replicator 3D printer, which can be a challenge. According to the instructions from the manufacturer, the levelling is typically done by using a sheet of paper to try and make sure the build plate is in an even position. If it isn’t, one is likely to encounter problems with builds going forward. This 3D printed version of this jig reportedly ensures your printer is yielding a steady output. 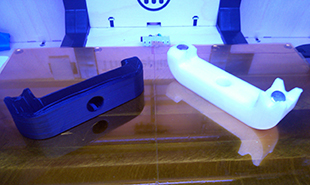 The StEMulate member explained his experience: “The original jig was printed using black filament. Due to gap distance variation following my inexperienced first try, layers were increasingly separated to one side of the extrusion but the final product was servicable and I was able to level the build plate by first establishing the proper distance using a metal feeler gauge and then measuring the distance from the rails to the build plate using the digital indicator, adjusting the level screws until the plate was balanced”.

Once all the four corners of the build plate were set to equal distance from the y-axis rails, it was possible to print a permanent copy of  the jig in white filament. The final step was to install small rare-earth magnets to clip the final jig into the place on the rails, without having to hold it and therefore influencing the measurement.

It is generally recommended to re-level your build plate regularly between print jobs and according to STEMulate this 3D printing jig has been used each time since.  The conclusion is that: “This is a tremendous tool, fashioned from the 3D printer itself, that makes all 3D printing much easier!”

Let us know about your ideas and experiences in making your own 3D printed parts.