While serving in the military in Afghanistan, Taylor was an unfortunate victim of an IED blast that led to the loss of all four of his limbs. From then on, the quadruple amputee had to make do with the somewhat-better-than-a-hook prosthetic limbs available to returning war veterans. With the billions of dollars that go into making the next generation smartphone, it’s amazing how little is put into the development of prosthetics or bionic extensions for amputees. For some, it’s just not a large enough market to tap. A human hand is an incredibly complex system that is virtually impossible, to say the least, to recreate perfectly using even the most advanced electronics and materials. That’s before we even get to issues like costs, proprietary rights, accessibility, etc. that could put such a hand out of the reach of even the richest, four-limbed individuals, let alone a relatively small number of amputees.

But recently, Taylor has become the first wounded soldier to wear a 3D printed bionic hand. Developed not by a global corporation pushing the envelope of technology and philanthropy, but by his friend Neal, an engineer from Iowa. 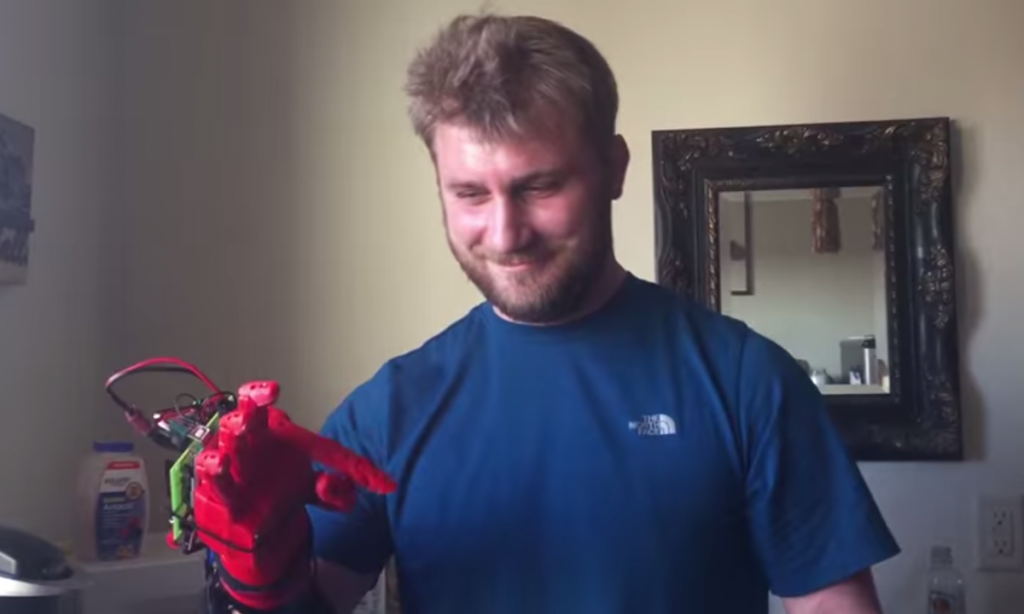 The hand is a rudimentary proof of concept that has staggering potential. Neal was able to begin developing the hand using the open-source, 3D printable ‘Dextrus’ robotic hand design. The Dextrus was the result of the crowd-funded Open Hand Project by UK-based Joel Gibbard. In two months, Neal printed the design using a da Vinci 1.0 3D printer, tested, modified & customized it for Taylor – and called it Dextrus V1.2. Using EMG sensors that communicate the flexing of his residual muscles to his 3D printed hand, Taylor controls a bionic arm that is more functional, easier to use, and way more affordable than the professional prosthetics he was using previously.

As you can see from this video of Neal testing it out, this 3D printed hand isn’t just a prosthetic, its bionic.

Speaking about what went into making the arm, Neal said, “For our 3D-printed arm, having cost between 1% and 2% of what his last prosthetic arm was, there won’t be any excuse for it not to have all of its features. The use of 3D printing and open-source programming to enable rapid prototyping at low-cost, combined with having an open-source hand design like the Dextrus available to work with, have been crucial to making this project a reality.”

And this is a reality for every amputee out there. The designs are all open source, certain parts can be 3D printed quite cheaply, and the rest can be purchased at hardware stores or online. With the help and know-how of people like Neal, any amputee can potentially build his very own bionic arm.

The one Neal has made isn’t quite the finished product though. He is working on making a 2-axis wrist, an elbow strap with push-button tension adjustment, and additional programming to allow for switching between grip modes. But it has its limitations and the important thing as he points out is that,

“In its completed form, this arm may not end up being the go-to for daily usage compared to the professional-made prosthetics that Taylor has, but that’s fine because this project will have served as the test bed for trying out new features and creating a control program to work as easily and intuitively as possible.  The next time Taylor is having a professional-made prosthetic arm put together, he will be able to provide this 3D-printed arm as an example of every feature and program behavior that he will want the new arm to include.”

To think that Neal’s remarkable effort in Iowa began with Joel’s Open Hand Project in Bristol, UK. The project eventually led to the formation of a company, Open Bionics, that is dedicated to making affordable and accessible prosthetics using 3D printing. Happy to see what his work has helped bring about, Joel says, “This was always the goal, to release my designs and have incredible engineers like Neal take them and adapt them for their own purposes and to help someone else. It’s awesome to think a design I worked on in my bedroom at my parent’s house has been downloaded and built by people I’ve never met across the world. It’s great that Neal is sharing his designs and ideas too. This is the fastest way to creating better prosthetics for the people who need them everywhere.”

There are so many things about this story to kindle a heartwarming glow and invigorate a fading hope in nearly anyone. Here, it’s not just about the technologies involved or the economics or the extraordinary circumstances or sheer goodwill that shine through by themselves. It’s about all of these coming together, in such a wonderfully breathtaking way, that you couldn’t just call it serendipitous.