Following the article about the use of 3d printing to help people with foot and ankle issues, another interesting orthopaedic application has been reported by OPS (Objet Printer Solutions), UK earlier this week about a new surgery that could potentially revolutionise adult reconstructive knee operations. 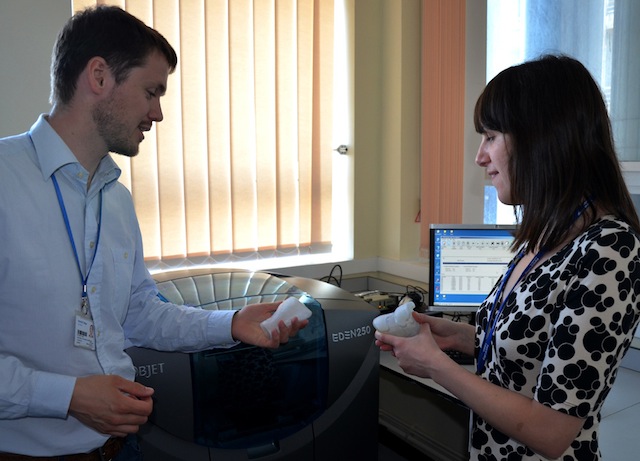 Professor Justin Cobb, the Chair in Orthopaedic surgery in the Department of Surgery and Cancer at the Imperial College Healthcare NHS Trust, is preparing to perform a pioneering surgery aided by 3D printing, which is used to create technically complex solutions for the patient prior to the operation. This operation is scheduled for a wounded soldier whose knee will be re-constructed from titanium. According to Professor Cobb: “This operation using 3D printing technology is a ‘world first’ for reconstructive surgery providing total liberation to the surgeon and opening up a completely new approach to the operation.”

Professor Cobb, together with his associate Dr Susanne Clark, have been researching the use of 3D printing since January 2012 with an Objet Eden 250 3D printer. The goal being to develop a patient-specific process that will conserve as much healthy joint tissue as possible in order to speed up the recovery.

The result was a new surgery process that helps to realign the body part through pre-operative 3D modelling. The fixation plate can subsequently be modelled to further enhance the recovery. It also reduces operation time because less sterilization is needed than with traditional processes. As a bonus, this new process also resulted in cost savings.

Traditionally, the operation would require the use of hand-held saws, cutters and metal jigs along with numerous x-rays and precision skills from the surgeon. Moreover, with these methods customisation was not an option for the implant, rather “off-the-shelf” implants would be used. Which only further highlights the tremendous benefits of the new process.

According to Professor Cobb “This new approach to reconstructive surgery should be able to re-establish his quality of life”.