Sensory reactions to 3D printing tend to be dominated by sight and touch — the visual aesthetics of the tech can be staggering sometimes, and it also enables us to touch things we may never have been able to before, I’m thinking here of the uptake of 3D scanning and 3D printing tech in museums to produce replicas. Tasting the results of 3D printed goodness are also possible — from a personal point of view, chocolate is somewhere near the top and meat is way, way, way down at the bottom. In terms of hearing and smell though, 3D printing — whether on an industrial or personal scale — does tend to conjure up an assault on our senses. The noise levels from most 3D printers are still one of the negatives in terms of usage in a home, studio or office environment, and most prevalent materials for 3D printers come with strong odours when printing that can be a cause for concern, particularly with ABS.

However, Alexander Baloche from Ultimaker has reviewed a new type of PLA filament material, which he has tested on his Ultimaker 3D printer, developed by a group of students from Avans college in the Netherlands. It has been dubbed Red PLA Strawberry, but Alexander would prefer ‘strawberry candy rush’ and reports that it is actually more pink than red and transparent. And the notable development with this material is that the “strawberry” connotations are not related to the colour in any way, but rather the smell of it from unpacking to printing.

Alexander received 2m of this filament, which is 2.6 mm in diameter and had measureable success with it on his printer, he reports:

“Just like normal PLA it stacks layer per layer with normal adhesion to the blue tape . I feared the high temperature would overheat or burn the odour and would only vaguely appear in the piece when cooled. But here’s where magic comes in, in my 3 x 4m room where I was printing these pieces, a candy flavored odour started to fill the room. It got to me in such a way that I bought a pound of sweets at the nearest shop and nearly finished it in less than an hour. Needless to say, this smell was maximized & released from the material when heating it to the melting temperature of the PLA. After the pieces were finished and the printer turned off, the odour remained in the non-ventilated room for the entire evening. When the piece cooled down it smelled as much like strawberry as the filament did before entering the printer, it’s as strong as normal PLA pieces and not sticky or anything.” 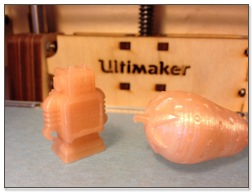 And Alexander thinks this points to the future, one where more and more people will be 3D printing at home, and this type of material (he also debates the use of ‘pine, eucalyptus, roses, lavender, maybe even Hugo Boss’) breaks down yet another barrier that currently stands in the way of that happening.