In the first of a two-part interview with Rambod Radmard, the designer and creator of a new, innovative iPhone case that is currently on Kickstarter, Shane Taylor considers how invaluable, and often overlooked, 3D printing can be for prototyping applications.

With 827 backers, USD$26,167 pledged of a $45,000 goal, and 19 days still to go, the Pocket Tripod bills itself as ‘The world’s first iPhone stand that can articulate to any imaginable angle, and can transform to the shape of a credit card’ on it’s Kickstarter campaign. Rambod, the highly creative mind behind this project shares some thoughts with 3DPI, and insights into the prototyping process, enabled by 3D printing, behind its development. 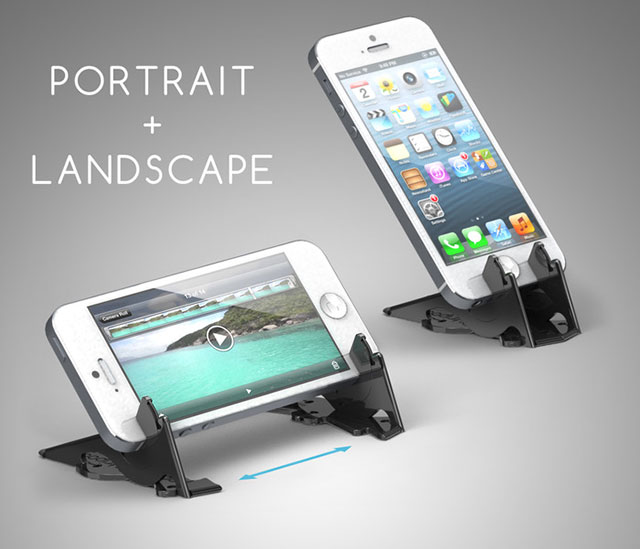 3DPI: Hi Rambod. Nice product! Probably one of the most innovative and intricate accessories I’ve yet seen for iDevices. What got you thinking about this in the first place?

RR: Thank you so much. I just really wanted a stand for my iPhone that I could always have with me, but without adding to the short list of items I have with me when I leave the house. I don’t have a case on my iPhone and I wanted a solution that didn’t add bulk to my device. So an iPhone stand that fits in a wallet became a very attractive idea. 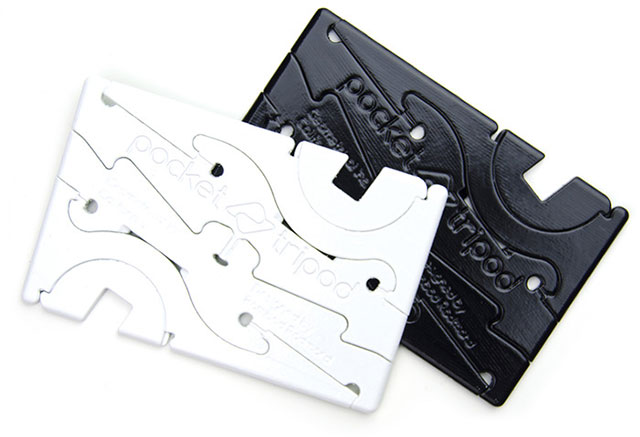 I quickly realized that I could maximize the working strength of the material if I used its edge to hold the iPhone, and of course making that section swivel to allow for angle adjustments became a natural choice. What really drove me to develop the Pocket Tripod beyond just a concept, however, was the fact that there was nothing else like this in existence already.

3DPI: Your Kickstarter hints that 3D Printing as Rapid Prototyping aided you upon your pursuit of excellence: how much, and in what ways, did 3D printing help you?

RR: That’s true. Developing this product without 3D printed prototypes would have virtually been impossible.

One of the obvious benefits was that of course it helped to fine tune the dimensions of the Pocket Tripod’s design to achieve its optimal functionality and feel. But more importantly, it was the only tool I had at the early stages of development to guide me in imagining the geometries that would produce the functions I needed. Because there was nothing like this done in the past, I had no point of reference to guide me. So there was a kind of “discovery” process, where I would create a 3D model that I thought would work, but after printing it, realize all the ways it could be improved.

3D modeling a new concept is like trying to sketch something with the lights off, and when you 3D print the model, it’s like turning on the lights back on; you see everything that’s wrong with the design and get a feeling for how to improve it.

Throughout the process of developing the Pocket Tripod, I ordered dozens and dozens of 3D printed prototypes, and they proved to be invaluable in discovering solutions and validating my designs. Not to mention, all the Kickstarter video scenes were filmed using 3D printed prototypes, and even the animator used the prototypes to get a feel of how the Pocket Tripod moves in real life, to make his animations look as natural as possible.

3DPI: Were you pleased with the prototyping output results for all those intricate mechanical parts?

That’s a good question. The short answer is: not always.

The Pocket Tripod has microscopic geometries that let it function the way it should. This made any variations in the quality of the print very noticeable. In larger prints, especially ones that serve aesthetic purposes, variations in resolution and material quality of the prints have smaller impacts. But in the case of the Pocket Tripod, small variations would really change how the product functions. Even though we were ordering our prints to be done on one of the best 3D printers on the market, one that costs in excess of $100k, which printed at very high resolutions, there were good and bad days.

When the printer was serviced and calibrated just before printing, you could really see and feel the quality of the prints improve. The results were more durable and the dimensions were accurate and precise, with excellent mechanical properties. Unfortunately there were also a lot of times that the same printer printed prototypes that weren’t up to par, and as a result the product’s components didn’t interact as well, and had shorter lifetimes. Again, as you hinted, this is something that’s much more noticeable when you work with tolerances of 0.001in, and won’t be a problem for larger prints.

More from Rambod in the forthcoming second part of this interview…