We’ve previously covered a variety of machines that claim to be 3D fabric printers, including the OpenKnit machine, which robotically knits clothing made from yarn.  Many of these machines, however, are either still in the hypothetical stages or remain dangerously close to the second dimension.  A graduate student from the Royal College of Art, Oluwaseyi Sosanya, has developed a device that weaves fabric in what is definitely 3D.  The caveat is that the printed objects must undergo a post-production stiffening process. 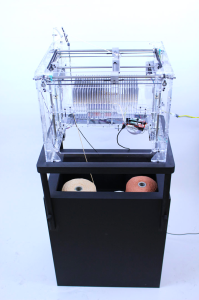 For his graduate project, titled The Structure of Protection, Sosanya whipped up a machine that weaves interlocking layers of straight warp threads across different heights.  Controlled by software written by the designer himself, the patent pending 3D Weaver feeds yarn through two separate tubes around a matrix of vertical poles.  The fabricated object is then dipped in silicone for the soft materials to maintain their structure.  Watch the video below for a better idea of how the 3D Weaver works and what it’s capable of.

Sosanya explains his inspiration and the mechanics of his machine to Dezeen, “I looked at a few different machines when designing this one and got most inspiration from a sewing machine and an industrial knitting machine. Both of these machines allow thread to move freely through the mechanics using springs and guiding to hold the tension. With the 3D Weaver, once the first row is layered, the thread maintains its tension, due to guide tubes and a initial winding of the thread programmed to run before the weaving of each structure. I coded a bit of software that allows any solid geometry to be split into layers and woven.” 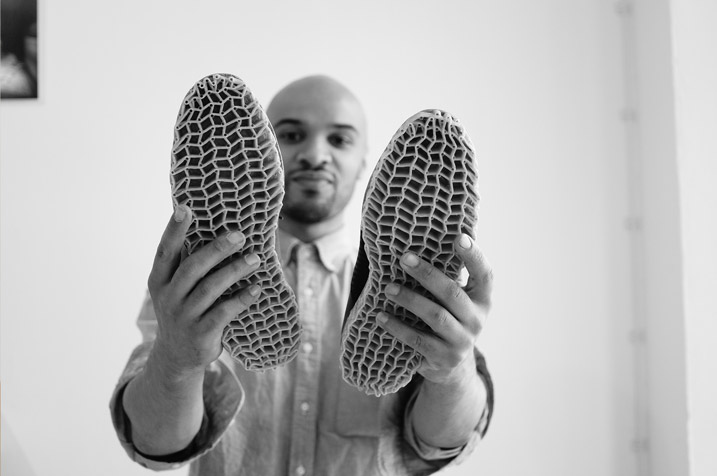 The designer, working with footwear designers Lixian (Lisa) Teng and Tomiwa Adeosun, 3D weaved the sole of a shoe to show off what his process is capable of.  Using natural fibers, like wool, cotton, and paper, and the silicone post-processing material, Sosanya describes his rationale behind such textiles, “The reason for using the materials I have chosen was to keep flexibility in the pieces. Their behaviour is solely dependent on the structures. Both thread and binder work together to hold the structure. A continuous fibre running though the piece provides more stability with less mass.” He adds, “I looked into structures found in nature and auxetic structures were a big influence in the development of the zigzag structure.”

The auxetic structures, forms that become thicker when under the stress of force, may have a number of applications, the designer tells Dezeen, “I have been looking into threads and structures for filtration and air purification,” he said. “I am developing more technical materials for helmets and stab proof vests – I am currently working on a material that I hope will address several of the issues caused by body shape that surround stab resistant vests worn by female British law enforcement officers.”

If you’re in London, Sosanya’s work will be on display at the Innovation Design Engineering at Show RCA 2014 until June 29.  For those of us elsewhere on the planet, we’ll have to wait until his project goes commercial.