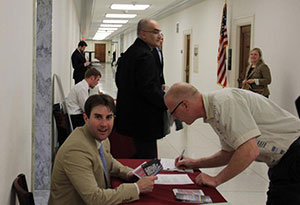 There are a lot of unanswered legal questions about 3D printing. The tremendous growth in the use of Rep Rap inspired printers over the last two years has created an altogether expected, but nonetheless murky legal context. The good news is that people are able to create things in their homes more easily than they ever have before. The bad news is that some of the things they create are protected by intellectual property law. Commercial interests have an obvious bias toward creating legal structures that protect their IP. Should these legal structures be constructed improperly, the innovation that has largely been fueled by openness could be stifled.

Enter Public Knowledge, a public interest advocacy group based in Washington, DC.  Created in 2001, the group is largely concerned with protecting the American Public’s interests on issues of intellectual property and competition. They have worked consistently to maintain the openness of the Internet, and were one of the driving forces behind the SOPA Internet Blackout last year. Public Knowledge also concerns itself with emerging technologies like 3D printing. As colorfully stated in a recent white paper, they want to make sure that law makers don’t  “screw up” this potentially game changing technology by making laws that don’t make sense.

To this end, Public Knowledge held its second 3D DC event on April 24th and 25th.  The event brought together the public, influential figures from the 3D printing community, and representatives from Congress. More than 500 people attended a public demonstration, where several companies displayed the technology and its uses. Public Knowledge also hosted an educational session that provided some education on IP, and set up meetings between members of Congress and the 3D printing companies in the districts.

The idea is pretty simple. Control the conversation. Expose members of Congress to 3D printing technology and everything that makes it positive (innovation, education, jobs) before they learn about the technology through the things that make it controversial (piracy, IP violations, guns).  There was a lot of positivity to share. Brook Drumm, of Printrbot, showcased his collection of low cost printers and the business he is building in Northern California. Tyler McNaney, of Filabot, demoed his filament recycling machine and shared his vision for sustainable and affordable 3D printing. Jordan Miller, of the University of Pennsylvania, described the groundbreaking work he and his team are doing to print the vascular structure of organs using sugar.

Efforts like this seem to be working.  Michael Weinberg, one of the event’s organizers, pointed out that “there is no existential threat to 3D printing right now.” In fact, the perception (amongst lawmakers that have even heard of the technology) is positive, especially given the President’s mention of the technology in the State of the Union.  But the work of Cody Wilson and Defense Distributed has also attracted attention. A concealed weapons bill being put forward by Representative Steve Israel (NY) originally contained strong language about regulating 3D printing, before Public Knowledge worked with his office to understand that 3D printing is one of a host of technologies that can be used to make concealed weapons. To Public Knowledge, it just didn’t make sense to single the technology out.

There are still legal questions that need to be answered. Right now, Public Knowledge is focused on influencing the laws surrounding what goes into 3D printers (digital files, scans) and what comes out (the prints themselves). Some have called for the implementation of digital rights management (DRM) systems on 3D printing files, and site the recent patent granted to Intellectual Ventures as a threat. Weinberg was pretty clear on this, stating, “There is nothing in the Intellectual Ventures patent that forces 3D printer manufacturers to include DRM.” And they’d like to keep it this way. There is also the concern that printer manufacturers might be held responsible for the patent and copyright infringements of those that use their printers. Because there are “substantial non-infringing uses”, Weinberg said, this type of liability is unlikely. The term comes from the landmark Betamax case, where the Supreme Court ruled that Sony could not be held responsible for the copyright infringement of its customers.

To find out more about what Public Knowledge is doing, visit their website.

James Coleman is a 3D printing enthusiast, and the founder of MakerStash.com, a supplier of 3d printing filaments and other maker supplies.