3D Printing A 3D Spot of the Future in Beautiful, Decadent Lisbon

The way I found out about 3D Spot, the actual first 3D printing retail space in Portugal, is typical of my experiences in the 3D printing industry. I was scheduled to go to Lisbon for a holiday weekend when Rachel sent me a lead on a 3D print shop opening up in Portugal. Since weird coincidences are the norm for me since I started working at 3DPI, I figured it would be in, or near, Lisbon. It was not. It was in Braga, about as far north as it gets from Lisbon without leaving the country’s borders. 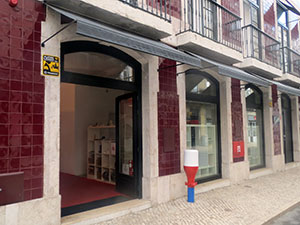 So I wrote the article on the first 3D print shop in Portugal. I knew it was risky to make that assertion but deep inside I think that I figured that, if it was not, someone would tell me. And they did. And guess what? The first 3D print shop in Portugal is actually in Lisbon. When Rafael de Souza-Falcão, the shop’s executive manager, wrote to 3DPI to tell us about 3D Spot I was already planing to pay them a visit. I just had to find out where they were.

The confusion is probably related to the fact that 3D Spot started out as a 3D printing service, using affordable 3D printers, such as the first Ultimakers, to offer rapid prototyping and 3D modelling services to local companies. The four founding partners, Joana Ogando, Sandra Calçado, Nuno Diniz and Rui Lourenço used their economic school experiences and degrees to launch a service that has few competitors in Portugal, while also relying on international 3D printing services such as Shapeways to 3D print out the more complex projects that required alternative processes. The PiP Eco Store, the shop in Braga, on the other hand, started out directly as a 3D print (and digital manufacturing) shop.

While having signed some very interesting and advanced contracts that involve 3D modelling, 3D printing, 3D scanning and reverse engineering, with the likes of TAP (the Portuguese national airline), EPAL (Lisbon’s Water Systems), Brazilian Shoe designer Galibelle, Ivity (a local brand company) and more, 3D Spot is now, and has been since late last year, also a 3D print shop, located in a five-windowed store, right in the centre of Lisbon.

On the premises they have four workstations for the team of six rotating 3D modellers, while the entire team constitutes a total of 12 people: the four founding partners as well as executive manager Rafael de Souza-Falcão and design director Francisco Mota. They work on advanced projects and also sell 3D printers and 3D printed objects. They offer reverse engineering to companies but also full body scans with Kinect and the Artec EVA 3D scanners for physical photography and self miniatures. 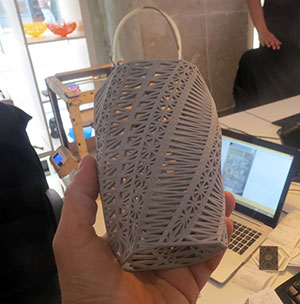 They have also launched a new website for 3D model sales and customization but “many Portuguese people like to see things in person so they love to come to the store, see the machines at work and touch the objects” says Rafael.

The enthusiasm is sky-high both for 3D Spot’s managing and design teams. Something I noticed is that, paradoxically, in a country such as Portugal, that does not have a particularly strong manufacturing industry – like, for example, Germany – a new venture such as 3D Spot can explore hundreds of possibilities in the 3D modelling arena without any real direct competition for more established 3D printing and rapid prototyping services.

They can offer very high quality models just by using a €2000 Ultimaker, truly democratizing production. “All local companies large and small immediately understood the new possibilities opened up by rapid prototyping and turned to us for more information,” says Rafael de Souza-Falcão. “Other companies asked us for small series of gadgets and prizes, while people are asking us to 3D their photos. We even 3D scanned and 3D printed a statue of Pope Woytila.” 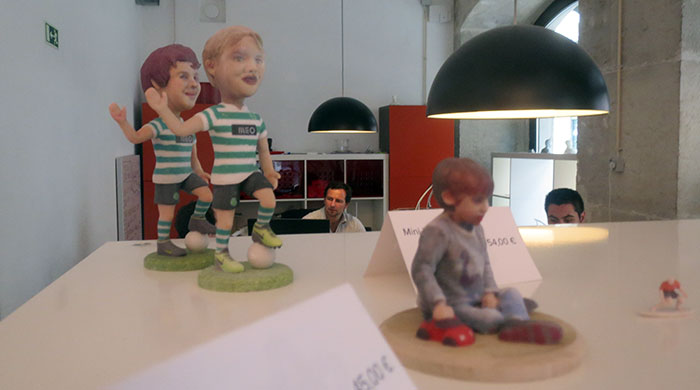 The future looks very bright since the shop seems to be mixing successfully both service and shop activities. They intend to grow a lot more by offering a wider range of desktop 3D printers while they are already working on new contracts such as one to build the 3D model for a new addition to the energy museum that will be built on Lisbon’s coast. Its design will mix a futuristic pavilion with a historic industrial building: there could be no better metaphor for 3D printing in Portugal.