When speaking with consumer 3D printing industry experts, artists and experimenters, one thing that many indicate as a hurdle that has to be overcome in order to truly bring 3D printing to the masses is the printed product’s exterior appearance. Sky Tech, a Taiwan based 3D printer manufacturer, just invented a “Magic Box” that may fix that.

3D printed objects tend to look too much like 3D printed objects and while that might have been cool in the early stages of the industry’s evolution, when hobbyists actually wanted their 3D printed objects to look different from mass manufactured products or – possibly – couldn’t care less about the appearance of the functional objects they had created, exterior product smoothness is something that now can, and should, be addressed.

Currently, finishing of many products is achieved by using acetone baths and, at a higher industrial level, Stratasys sells a Smoothing Station that is not overly publicized and is rarely seen at shows and exhibits. Now though – if Sky Tech will deliver on its Kickstarter promises – Stratasys and acetone baths may have a much easier to use and much cheaper competitor to deal with.

The Magic Box may truly mark a new beginning for consumer 3D printing. Quite a few 3D printing adopters seem to agree, as the Kickstarter campaign shot through its initial $20,000 funding goal, tripling it with 34 days still left to go at the time of writing. The first 80 magic Boxes, priced at $399, are already gone (there are two left at the time of writing and I’m seriously considering getting one) but there are quite a few more available at the slightly higher prices of $419 and $429. If you don’t make it (or read this after the campaign ended) you will still be able to get one: Sky Tech has created a dedicated team to work on the mass production run, which will be retailing for $699.

The Magic Box still uses an acetone vapour bath to smooth out the lines present on FDM prints. But unlike current acetone baths, Sky Box’s advanced control technology automates the process and eliminates mess. The Magic Box also allows for use with PLA prints as well, according to Sky Tech’s claims. With both ABS and PLA, longer times will give smoother finishes but less detail, while shorter times will preserve detail but the object’s external surface will remain a bit rougher. 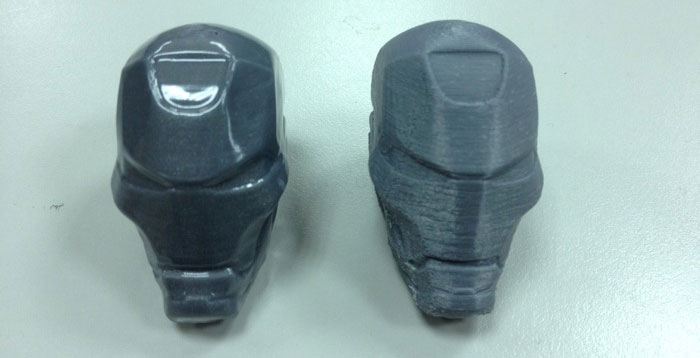 After the finish is finished, the exhaust fan and filter will capture all excess vapour. It measures 30x30x29 cm and its chamber size is 25x25x20 cm, weighing in at 5 Kg, which all contribute to make the Magic Box a perfect addition to the desktop home manufacturing complete cycle.