Dude, did you see that new Justice video where they turn a 3D printer into a computerized tattoo gun? Oh, that wasn’t Justice? Anyway, did you see it? Those French guys totally turned a MakerBot Replicator 2 into a tattoo gun!

The idea started as part of a workshop titled Public Domain Remix, hosted by the French Ministry of Culture at ENSCI les Ateliers, a famous Parisian design school.  The participants of the event were instructed to remix images, sounds, and video found in the public domain.  One group, calling themselves Appropriate Audiences, decided to hack a 3D printer to draw tattoos of public domain images.  With some help from Le FabShop, a French hackerspace assisting with the event, the team took a desktop 3D printer found at the school, replaced the extruder with a pen, and created their prototype within the workshop’s allotted 8 hour time frame.  The machine was able to draw their images in front of all of the workshop participants, as well as the Minister of Culture herself. 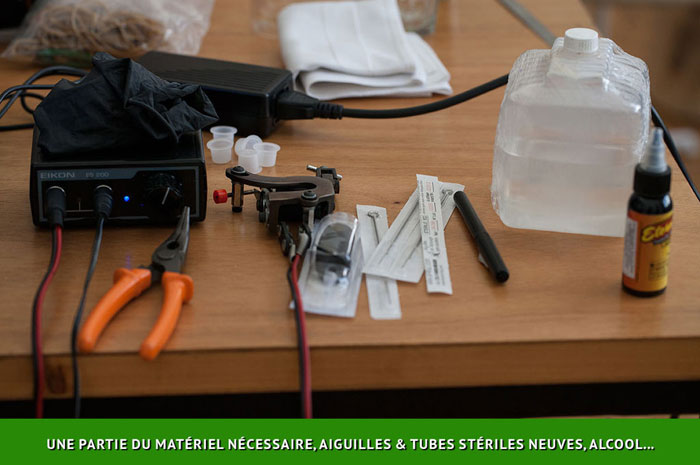 After the event was complete, the design troupe pushed the process further, replacing the pen with an actual tattoo gun from an amateur tattoo artist.  To demonstrate the quality of the robotic tattoo gun, the design they chose for their artwork was a simple circle, first testing it on a silicon skin substitute.  Then, they had to find a willing participant to receive the first robotically applied tattoo.  This proved easy, with many volunteers hoping to mutilate their skin in the new 21st Century way.

The process of calibrating the printer and ensuring a quality tattoo was a bit tedious. The design team had to first 3D print an adapter for the tattoo gun, which was fixed into the extruder carriage in such a way as to ensure that it wouldn’t vibrate. In the printing software, the wall thickness of their print was set to .2mm with no infill, as they haven’t managed to figure out how to colour in their tattoos, yet. 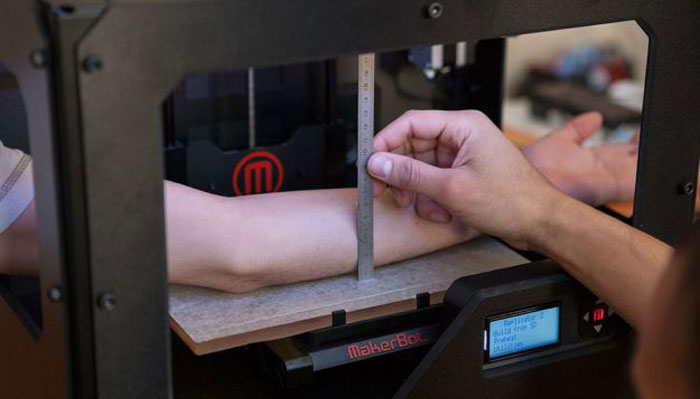 Then, the team had to measure the distance between the top of the arm of their participant and the build platform of the machine; this distance was inserted into the Gcode of their print to compensate for the difference between the arm surface and the build plate. The team also had to compensate for the endstops used to calibrate the printhead before printing/tattooing because the length of their needle was different from that of the extruder. Because skin is more elastic than silicon, the team had to use a piece of rubber to tighten the participant’s skin. 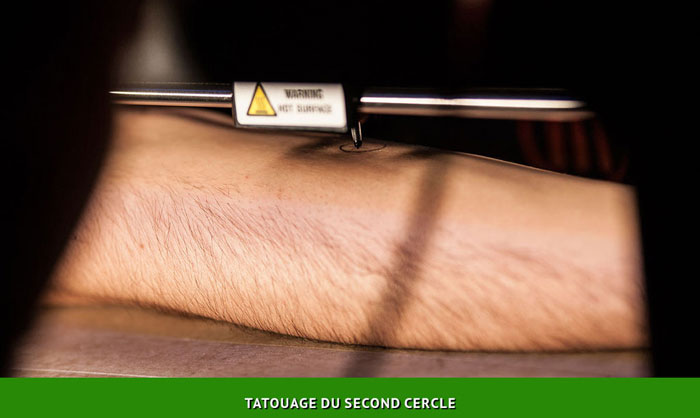 Finally, they were about ready to print.  After sterilizing the equipment, filling the needle with ink, they sent the drawing to print. Once the machine was initiated and ready to start printing, they paused the machine and placed their participant’s arm into the build chamber. The next step, as the project’s Instructables page describes it is, “Start the motor, cross your fingers and… GO!”

Though, in some ways, it may seem as though Appropriate Audiences pushed 3D printing technology a step backwards, turning it into a 2D drawing device, they may have inspired some new ideas in the world of tattoo art and surface contour printing. By remixing the cartesian 3D printer to tattoo onto skin, they’ve demonstrated a proof of concept of how to take something like a robotic arm or surface contour printing machine, such as that being developed at the TU Delft Robotics Institute, and turn it into a computerized tattoo machine.  This may cause a threat to talented tattoo artists everywhere, but, in the future, if you get a tattoo from a robot, you’ll have no one to blame for its sloppy design but yourself!