Divergent 3D has produced the chassis and bodywork of its futuristic looking Blade on a 3D printer. In doing so, it has unlocked a potential construction method that could change the boutique car industry.

Entrepreneur Kevin Czinger concentrated on producing a lightweight car with a low carbon footprint, but he wanted to achieve that through manufacturing savings. 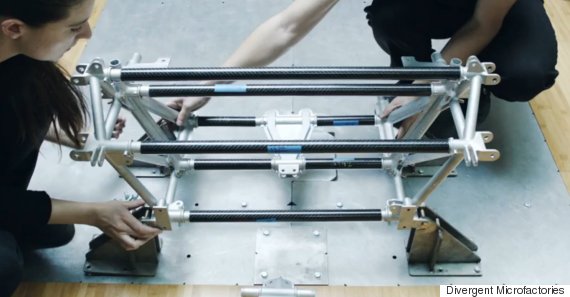 With a node-based chassis that essentially uses a combination of aluminium cross braces joining carbon fiber tubes, the company has produced a car that weighs just 1388lb. That is half the weight of most comparable sportscars made with traditional methods. It can also be printed locally, rather than produced half way across the world and shipped.

Hypercars go hybrid, but is that a good thing?

Ferrari, Porsche, McLaren and now Bugatti have adopted hybrid powerplants in their range-topping supercars, but the Blade is a refreshing alternative that Czinger argues tackles the real problems facing the sportscar industry.

It is powered by a 700bhp, turbocharged engine that runs on Compressed Natural Gas or gas, so it’s a novel bi-fuel approach that means the Blade really does stand out in the market. It’s also seriously fast. Divergent 3D claims it will hit 60mph in 2.2s, which is a match for almost anything on the road.

The California-based company has promised to democratize the car industry and put its node technology out into the open so small start-ups can use it. Czinger contends that this simple chassis structure, which weighs just 46kg in the Blade, can be adapted to create saloons, trucks or executive cars with ease.

“We have got to rethink how we manufacture, because — when we go from 2 billion cars today to 6 billion cars in a couple of decades — if we don’t do that, we’re going to destroy the planet,” Czinger said.

Batteries come at a price

Hybrid cars return amazing fuel consumption figures, but producing the car and the batteries is hugely damaging in environmental terms. Disposing of these complex Lithium Ion batteries when they reach the end of their lifespan is also a problem we’ve yet to deal with on a grand scale. It’s a can the industry is kicking down the road and hoping that technology provides a solution.

Divergent’s plan may be ambitious, but it is also a realistic plan that could help reduce the carbon footprint of the entire car industry by designing globally and printing locally.

The North American Technology Innovation Award recognises Divergent 3D’s “unique approach in developing and leveraging new technologies that impact the functionality and the customer value of the new products and applications.”

Awards panel is more than impressed

The judging panel at Frost & Sullivan audited the company and scored it on a number of different factors, including the technology attributes and the potential future business value. It was deeply impressed with the node-based system that is known as the Divergent Manufacturing Platform, scoring the company a 9 and 9.5 out of 10 respectively.

“Divergent 3D’s advanced chassis architecture can easily be deployed in automotive and other applications to optimize performance, increase energy efficiency, and reduce life-cycle emissions,” said the judges. “Frost & Sullivan’s independent analysis clearly shows that the technology will provide excellent customer value and increase their return on investment by reducing manufacturing and assembly costs.

Until now, Local Motors has been the watchword for 3D printed cars, but it is a boutique manufacturer serving a niche audience and the Strati looked rough round the edges.

Divergent 3D started with a supercar, but this is a way to take the whole thing mainstream. It will be fascinating to see how it plays out.