Customisation, customisation, customisation… Camden Image Gallery in Camden, London is to host a group show, exhibition and presentation evening by notable artisan of design-for-3D-print, Bryan Oknyansky. His brand, Shoes By Bryan, brings a range of sophisticated futuristic 3D printed shoe designs to the present, and has accomplished accolades as foremost as the Muusex Vogue Talents Young Vision Award 2014 and being a Finalist for the Drapers Footwear & Accesories Awards 2014.

3DPI has followed the inspiring work of his throughout over recent years in the third dimension of printing. For me personally, 3D printed shoes are a trend that I first came across whilst watching Christopher Barnett’s Explaining The Future YouTube series. Mr. Barnett illustrated near-future potentials for the customisable consumer applications of 3D printing — with examples, such as shoes. Comments in response were sometimes discarding of the concept or articulated disbelief. That trend is increasingly already with us. Shoes By Bryan are at the forefront of the trend.

Mr. Oknyansky is also a sustainability-progressive architectural designer and innovative niche product designer, his vocation has already lead him to work in the United Kingdom, United States and China. He has been a guest speaker at eminant institutions such as the Royal College of Art London; University of Nottingham, UK; and Beijing Design Week. 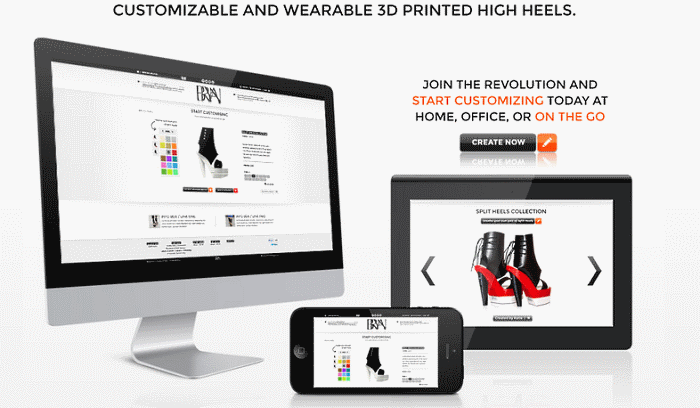 The designer has recently made his Split Heels design series into a collection, enlarging it with three new shoe footwear designs: Wedges, Lows and Creepers. One of the key features of the collection is customisation, with an online facility that takes the patron through steps to make the design more personal to themselves. Also featured is an iOS app that empowers the contemporary consumer to create their customised fashion product whilst on the move. The personalisation aspect of the featured designs orientates around a choice of colours for set parts of each shoe. These elaborate yet sophisticated fashion accessories are a real joy.

The event will be taking place at the Camden Image Gallery from 12 noon. Bryan Oknyansky will be there in person on the 7th of November between 6 and 9pm.