Back in 2009, scientists detected an odd-shaped rock by the Mars Exploration Rover Opportunity’s panorama camera.

NASA’s Jet Propulsion Lab (JPL) team spotted the rock, now called Block Island, in the images downlinked to Earth after it had driven past the rock. The rover backtracked some 820 feet to study Block Island closer, eventually touching the rock with its robotic arm. The image showed a rock approximately 2 feet in length and half that in height, with a metallic bluish tint that distinguished it from other rocks in the area.

Upon further analysis scientists discovered that Block Island was a meteorite comprised of iron and nickel. A portion of Block Island’s surface indicated exposure when a meteorite is abraded, polished, and etched by windblown sand.

A Piece of Mars on Earth

JPL decided to 3D-print the meteor using its Stratasys Dimension 1200 printer. The final result was a realistic-looking, true-size facsimile of a Martian meteorite.

This 3D-printed meteorite is the first of its kind, made from precise measurements by a rover on Mars. It potentially opens the door to other detailed models of objects and terrain on Mars or elsewhere in the solar system.

Researchers leveraged software, generally used to help navigate the rover, to create depth meshes of the meteorite’s surface from six positions and combined them into a three-dimensional digital model. Block Island was much bigger than the 3D-printer’s build envelope, so JPL researchers broke the computer model of the meteorite into 11 sections.

It took over 305 hours to print the parts. Materials included 281.11 cubic inches of acrylic thermoplastic media, along with 37.29 cubic inches of plastic support media to form the support structure inside the rock model.

Researchers then assembled the parts and painted the model to match Block Island’s color based on images from the rover.

For the JPL team, it’s the next best thing to bringing real Martian rock samples back to Earth. 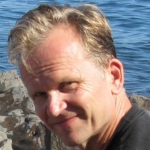 Mitch Bossart is a professional writer for GoEngineer, a company that provides SOLIDWORKS, Stratasys 3D printing, and other best-in-class engineering and manufacturing solutions. Mitch is a technology enthusiast, and he loves writing about people and companies that are shaping our world. You will find Mitch at various coffee shops throughout the Minneapolis/St. Paul area--writing, socializing, or dreaming about the next great American screenplay.